Thursday continued the trend for the week with stocks losing ground. So far this week we have seen gains followed by losses on a day to day basis. All four indices opened in positive territory, but by the end of the day three were in the red. The Russell managed to hang on to a gain of 0.10%.

Eight of the 10 sectors lost ground on Thursday with consumer discretionary and industrials gaining ground.

The discretionary sector rose 0.30% and the industrial sector gained 0.22%.

The energy sector was one of four sectors that lost over 1.0% as it dropped 1.6%.

The tech sector lost 1.39% and it was the second worst performer.

The barometer dropped in to negative territory once these results were added in, falling from 12.1 to -15.8.

Today’s trade idea is a third straight bearish one. Helmerich & Payne (NYSE: HP) appeared on my bearish scan last night and the fundamentals are pretty bad. The company scores an 8 on the EPS rating scale and a D on the SMR grading system. 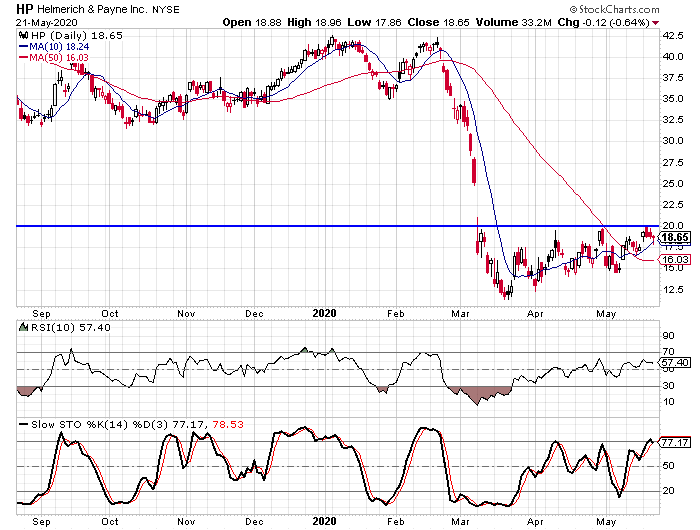 The daily chart shows how the stock has had trouble breaking back above the $20 level since dropping below it in early March. The stock has tested the resistance on two previous instances and failed both times. We see that the stochastic indicators hit overbought territory and made a bearish crossover last night.