The Russell ended up with the biggest loss at 1.95% even though it was in positive territory in the afternoon. The Dow fell 1.59% and the S&P dropped 1.05%. The Nasdaq was the lone index that started in positive territory and it remained there until the final half hour when it dropped sharply and finished with a loss of 0.54%.

All 10 sectors finished in the red on Tuesday but the percentages varied greatly.

The energy sector fell 2.8% and that was the worst loss of the bunch.

The financial sector dropped 2.44% and that was the only other loss over 2.0%.

The communication services sector dropped 0.02% as the top performer and the consumer discretionary sector only declined 0.36%.

My scans produced very few signals from either side last night.

There were 13 bearish signals and only two bullish signals. The total of 15 signals is the smallest since March 30.

The barometer dropped from 50.8 to 35.5 once these results were added in to the equation.

I didn’t like any of the setups from either of the lists, so I turned to a different resource and found a bearish trade that I like. Teck Resources (NYSE: TECK) got a bearish signal from Tickeron’s AI platform and the company has an EPS rating of 47 and the SMR rating is a D. The confidence level for the signal was 89%. 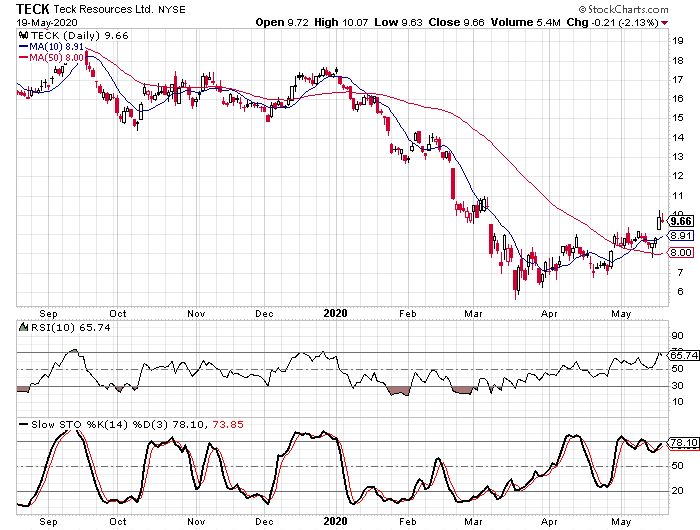 Teck Resources broke above its upper Bollinger band on Wednesday and the 10-day RSI hit overbought territory at the same time. The recent rally helped the stock fill the gap from back in March and I look for it to reverse course now.