The selling that occurred on Monday carried over in to Tuesday and all four main indices fell once again. Oil prices bounced back—sort of. Just because it shifted to the May contract, West Texas Crude was trading under $10.

All 10 of the main sectors fell again and this time it was the technology sector that got hit the worst with a decline of 4.21%. Three other sectors dropped at least 3% – financials, communication services and healthcare.

The utilities sector dropped 1.65% and that was the smallest loss of the bunch.

The energy sector dropped 1.95% and that was the second smallest loss.

These were the only two sectors that didn’t fall at least 2%.

This was the first result in the last four that saw the skew to the negative side get worse.

The barometer still rose a little after these results were added in with the indicator moving to -39.6 from -46.8 on Monday.

Today’s trade idea is the 10th straight bearish trade idea. I don’t really being so one-sided with the trade ideas, but I have to go with the side where I see the greatest odds of success. Today’s trade is on the iShares MSCI China ETF (Nasdaq: MCHI). We don’t have fundamental ratings because it is an ETF, but the fund received a bearish signal from the artificial intelligence at Tickeron on Monday and past signals on the fund have been successful 90% of the time. 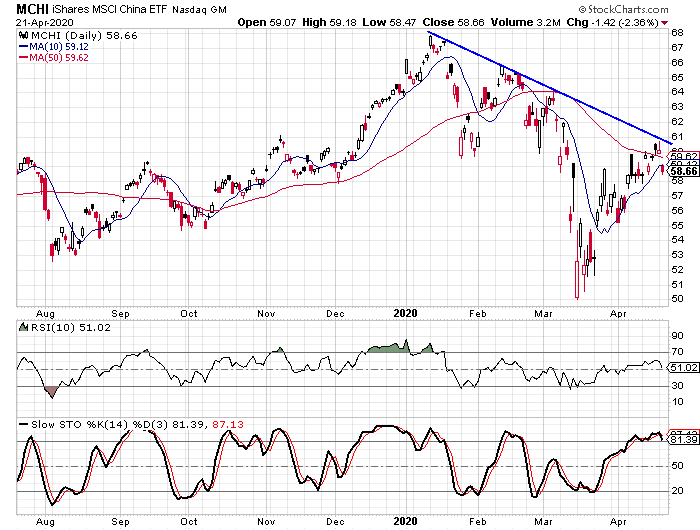 The MCHI has been trending lower since mid-January and if we connect the highs from January and February we get a downwardly sloped trend line and the stock just hit it this week. We also see that the fund is overbought based on the stochastic indicators, but those indicators made a bearish crossover last night.