For the first time since February 11 and 12, the S&P experienced two straight days of gains on Tuesday and Wednesday. Yesterday’s gains weren’t as strong as Tuesday’s and not all of the indices finished higher, but seeing two straight positive days for the S&P is a start.

Seven of the sectors moved higher while three moved lower.

The industrial sector was the top performer with a gain of 5.13%.

The energy sector turned in the second best performance with a gain of 3.91%.

The communication services sector was the worst performer with a loss of 1.54%.

The consumer staples fell 0.27% and the tech sector dropped 0.13% to round out the three sectors that lost ground.

My scans continued to produce strong positive results on Wednesday. There were 98 bullish signals and two bearish signals.

The barometer continued to climb with these results. The final reading last night was 92.2, up from 78.4 on Tuesday.

With seven of the last eight trade ideas being bullish ones, I have been paying particular attention to any bearish signals that I get. One of the two stocks with bearish signals from last night did catch my attention and it was Zscaler (Nasdaq: ZS). The fundamentals aren’t terrible, but they aren’t great either. The EPS rating is a 42 and the SMR rating is a B. Even with that, the chart jumped out at me. 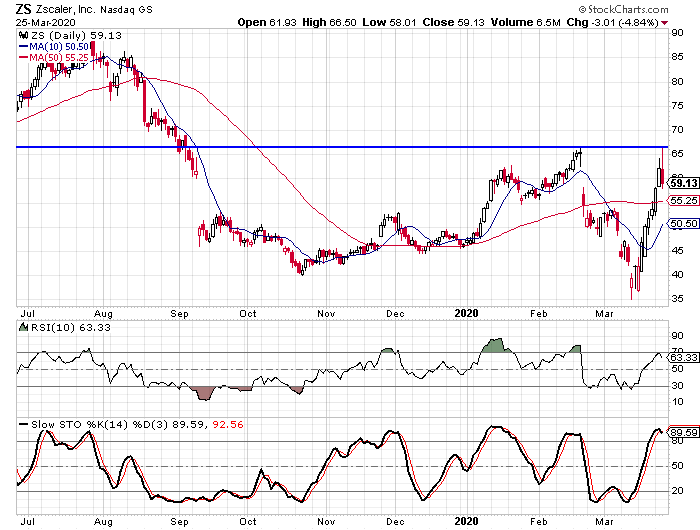 The stock peaked at $66.50 back on February 20 before gapping lower the next day. In yesterday’s trading the stock peaked at $66.50 before pulling back rather sharply and closing below $60. This caused the stochastic readings to make a bearish crossover as they are in overbought territory. I look for the stock to move lower over the next few weeks.