Another big rally on Wall Street is giving bulls some confidence. That said, here’s a few top stock trades to consider now. 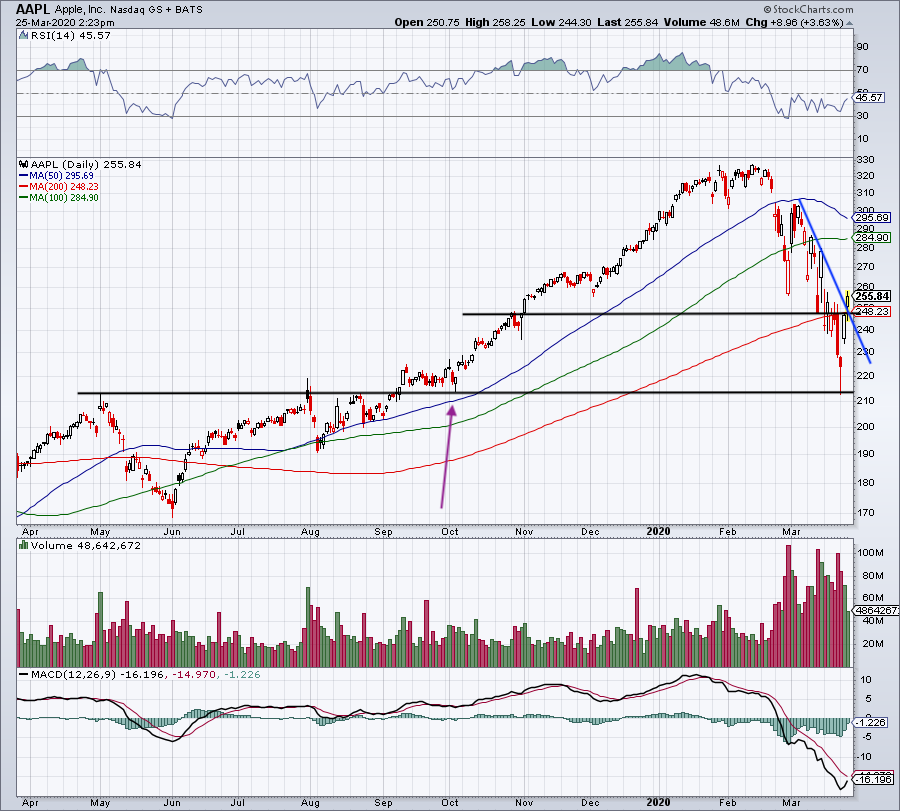 Apple (NASDAQ:AAPL) may have gained just a few percent on Wednesday, but it’s up dramatically from this week’s low. On Monday, the stock hit the exact breakout level from September, at $215.

You remember this level. Apple topped out here twice, once in May and once in July despite strong earnings results. In September, AAPL finally broke out over this mark, then held it with an impressive reversal in October (purple arrow).

I called for a pullback in Apple once it was clear that momentum had waned.

I want to see the stock hold up above these marks now. A move back below $240 puts a gap-fill down toward the $220s in play.

On the upside, a rally back to the 100-day moving average seems greedy — but it’s technically possible. At this stage, though, I’d be cautious. It’s still a bear market after all. 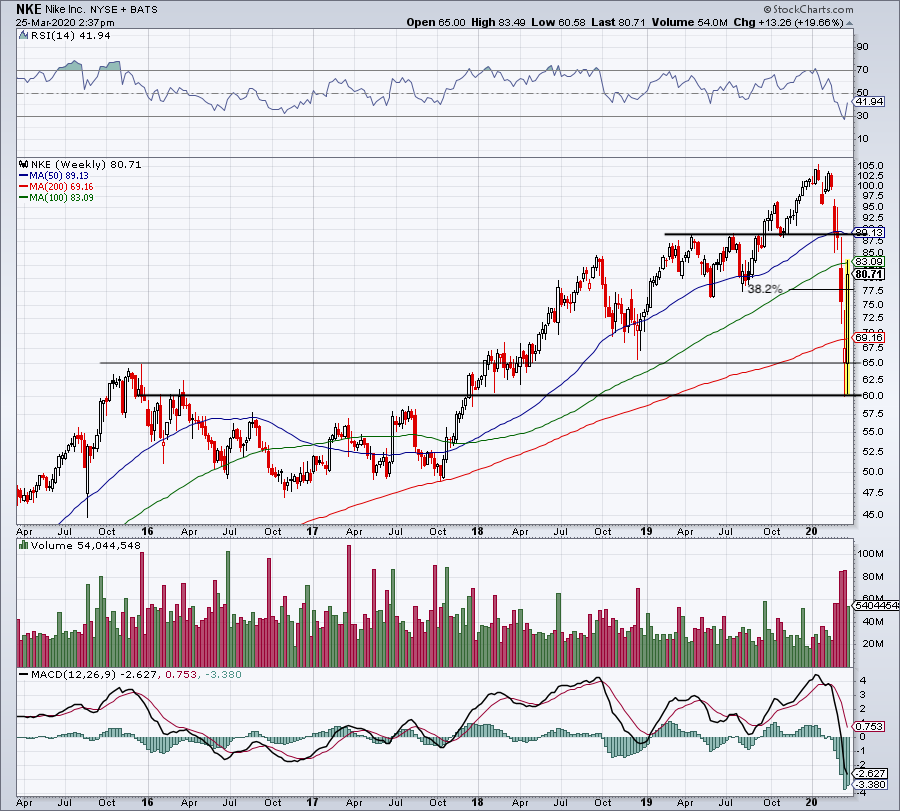 The rally has been powerful, as Nike stock reclaims the 200-week moving average.

After two weeks, the stock has successfully closed both weeks north of $65, while tests down to $60 held as support as well. 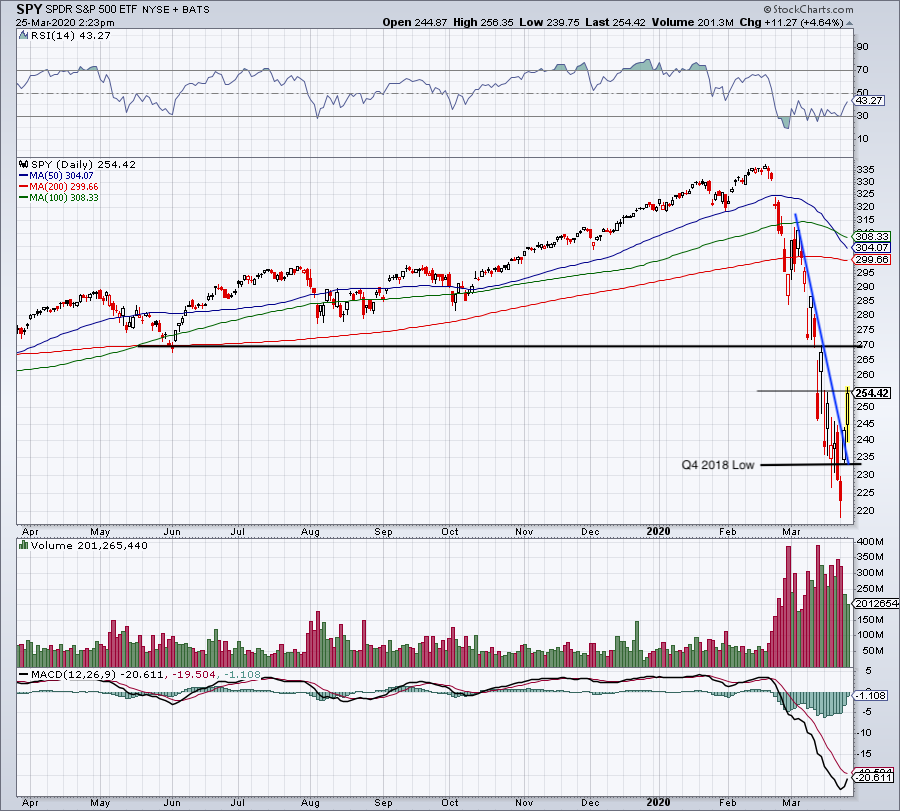 The SPDR S&P 500 ETF (NYSEARCA:SPY) is looking to complete its first two-day gain in more than a month. The ETF is also pushing over downtrend resistance (blue line) mark that’s beaten it down for weeks now.

This $255 level could be critical for SPY, putting $270 on the table if it’s able to clear it with conviction. Below it keeps a retest of the lows from the fourth-quarter of 2018 on the table near $233.

Below that puts the 52-week lows on the table.

I’m not trying to be a pessimist here, but remember, we are in a bear market at the moment. Up big from the lows, and it’s hard to add aggressively to longs until we get some better news and more technical confirmation.

A decline that results in a lower high will give bulls another chance to load up and the charts more time to repair. A surge forces investors to chase longs and ultimately puts another steep decline in play. 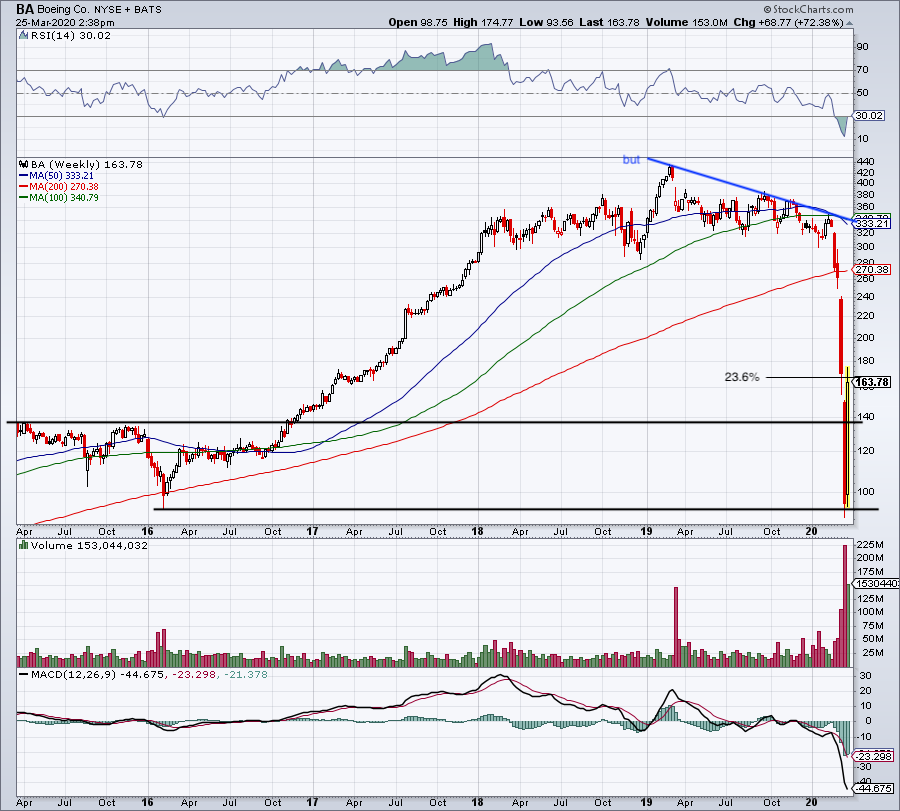 Boeing (NYSE:BA) shares finally popped higher, as the stimulus bill looks to wrap up soon. Shares were able to reclaim the $137 level, but are running into the 23.6% retracement for the 52-week range.

Rogue Stock Trader Delivers Market-Crushing Returns for 20 Years [sponsor]
Louis Navellier has a track record that’s the envy of Wall Street. For over 20 years he's outperformed the market and discovered Apple at $1.49... Oracle at 51 cents... and Amazon at $46 along the way. Here's what he's saying to buy now.