Stocks roared higher on Tuesday as the promise of a stimulus package from Congress gave investors confidence. All four major indices saw huge jumps and the Dow had its best day since 1933 with a gain of 11.37%.

All 10 main sectors experienced huge jumps on the day and six of them saw double-digit percentage gains.

The industrial sector shot up 12.65% and the financials gained 12.4% as the second and third best performers.

The consumer staples sector gained 5.1% and that was the smallest gain on the day.

The communication services sector tacked on 6.15% and that was the second smallest gain.

My scans turned decidedly more positive with 167 bullish signals and only one bearish signal.

The barometer jumped from 20.7 to 78.4 once these results were added in to the equation.

With so many stocks to choose from, it was difficult to find just one for today’s trade idea, because there were a number of bullish setups that I liked. Even with that, there was one that stood out and that was SolarEdge Technologies (Nasdaq: SEDG). The company scores a 99 on the EPS rating scale and it gets an A in the SMR category. 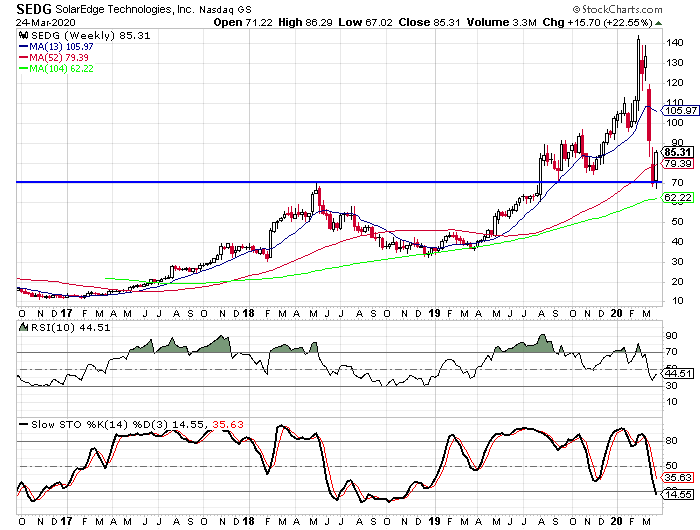 Like we saw with ASML on Tuesday, SolarEdge was on a list of stocks I have been tracking as a possible stock investment. The reason the stock stood out, besides the strong fundamental ratings, was due to the weekly chart. We see how the stock hit resistance around the $71 area in May ’18. The stock eventually broke through that price point in August 2019 and then pulled back a little. The $71 area acted as support in September. Now it looks like the stock is finding support in the area once again.