The action on Wall Street has gone bonkers. In the first three days this week, the averages moved 4% a day and today is looking just as violent.

Clearly, trading the stock market right now is fraught with danger and not for the faint of heart. This is especially true when dealing with a group of hot stocks like Shopify (NYSE:SHOP), Roku (NASDAQ:ROKU) and Salesforce.com (NYSE:CRM).

Nevertheless, today we brave the weather and look for the opportunities that were born from this neck-breaking equity correction.

The world took its time in doing so, but finally panicked over the spread of the coronavirus from China.

So investors sold out of stocks at a record pace. In all fairness, the indices were at all-time highs, so it was easy to understand why this happened. The good inherent news born from sharp corrections is that they create great opportunities.

The easy thing to do is to run and hide. But like the famed investor Warren Buffett preaches that it’s best to buy when everyone else is fearful.

This is not to condone reckless abandon going all in. After all, the VIX is still very high, so caution is necessary for both bulls and bears. A market that moves up and down 4% in mere hours is a dangerous one for buyers and sellers. Moreover, the U.S. Federal Reserve rate cut created a crisis in the bond market letting the 10-year yield fall below 1% for the first time ever.

Hot Stocks to Trade After the Correction: Roku (ROKU) 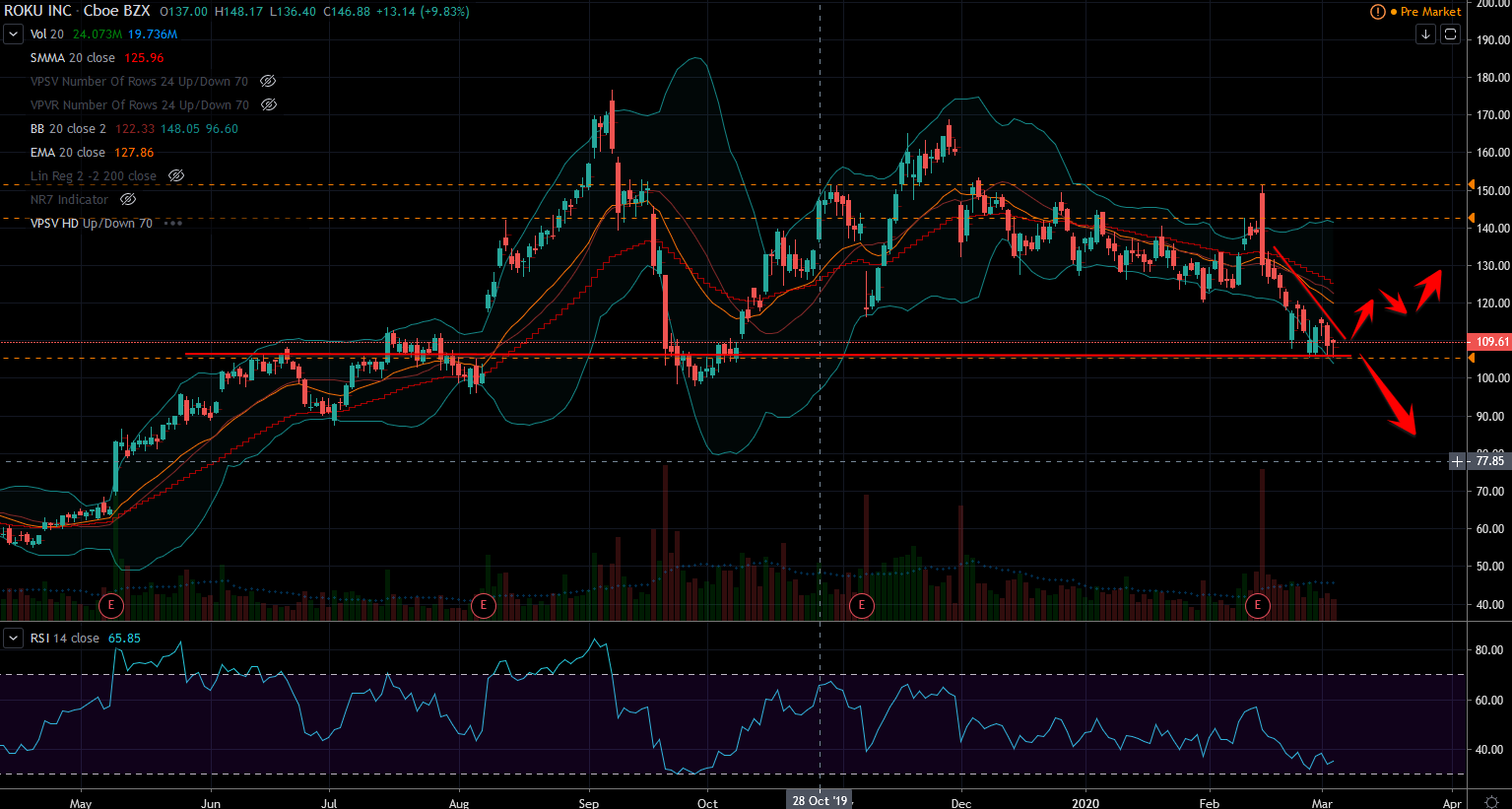 Roku stock’s range is tight and a move is coming. But the direction of the move is still unknown.

It has many fans and they are passionate about it. I am not one of them, but I mostly share bullish setups and this 40% drop from the highs definitely warrants a look. However, there is a big caveat to go along with it because there are levels that must hold just below the current price. And if they fail, they could start technical bearish patterns that could bring a retest of the $80 neckline. To be clear, this is not my forecast, but it is a scenario that does exist and doesn’t need a big nudge to trigger. If the stock market in general decides to continue to fall, Roku stock could get collateral damage.

Now, the good news is that management is making progress. It recently delivered a strong earnings report, but the bulls failed to hold the big headline spike. In fact, they used it as a catalyst to sell into a 20% correction fast. This is a tricky stock because it moves fast in both directions. This movement makes it difficult to be surgical with entry and exit points. Those who believe in it should just own it for the long haul. Management seems confident in its plan and execution. They are giving investors no reasons to doubt that. But there are also shorter-term profits to be had.

Despite the risk that lies beneath, there are triggers for opportunities above. If the bulls can cut through the resistance here and get above $115 per share, they can invite more momentum buyers. These are the traders who like to buy-high-and-sell-higher and they would chase the breakout from the lower-high trend line. The upside target would then be $124 per share. The problem is that it was a big ledge from Feb. 21, so it will present a lot of resistance. For that reason, I would trade around it and lock profits early. Resistance doesn’t usually mean a wall. ROKU is a powerful mover, so it could blast right through and target the $130 ledge.

This is where the definition of the time frame is important. These are micro levels intended for traders; whereas, the investors can ignore this short-term noise and stick to their thesis. I would caution taking new full-sized positions here. Taking partial ones makes better sense. We still have a lot of questions on this global event and how it’s going to unfold in the next few months. Even online companies like Roku could be impacted by shortages or major disruptions of supply chains. 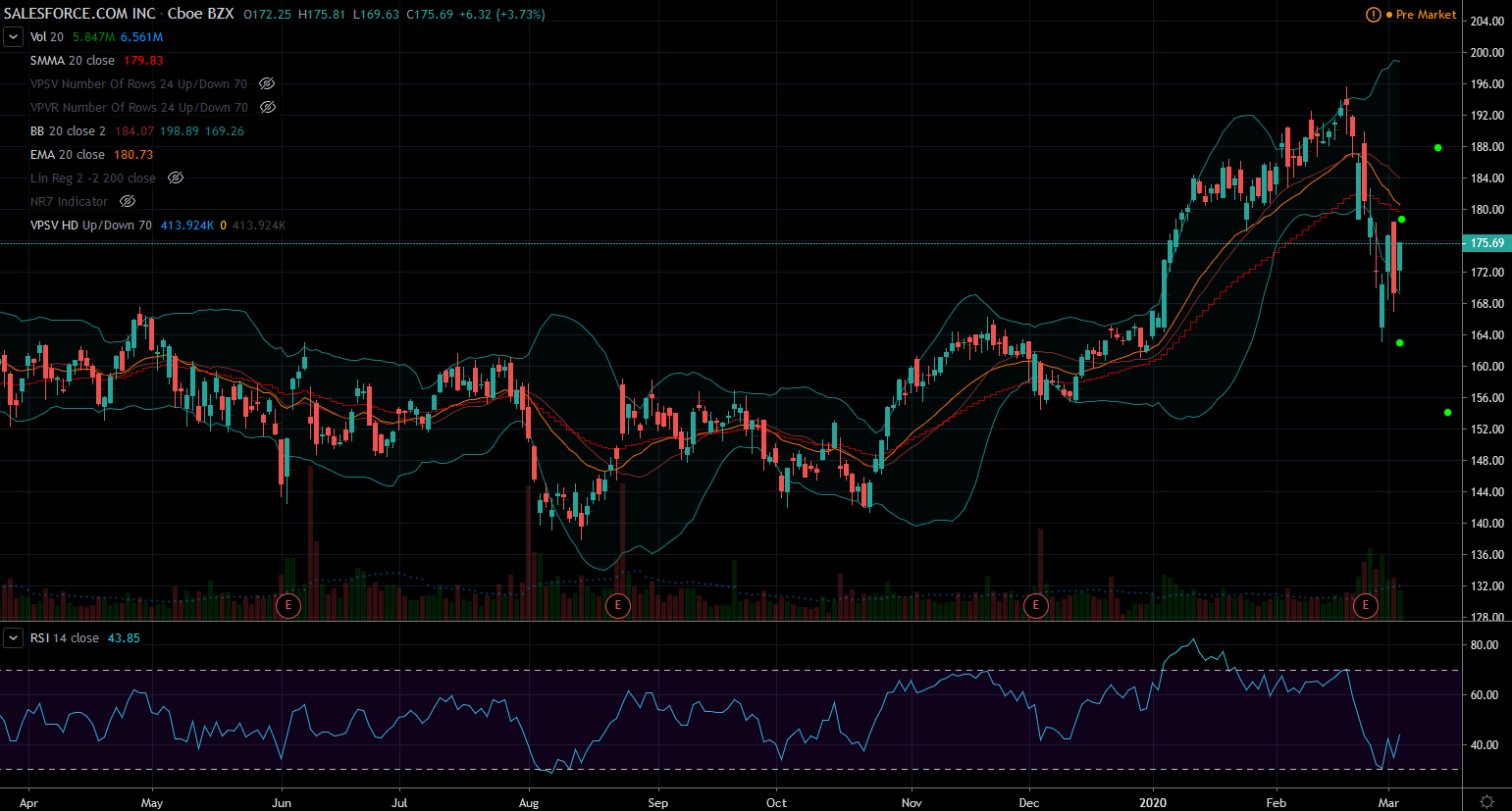 Salesforce is a prime example of a momentum stock. The company has accomplished growth like very few companies ever have before. They basically invented the concept of the cloud. And in their earlier years, they were the “David” who battled the Microsoft (NASDAQ:MSFT) “Goliath” and they slayed it. Under the leadership of Marc Benioff they have been setting growth records ever since.

Recently, we learned of a shake-up in the c-suite but of the good kind. For whatever reason, Mr. Benioff is coming back to take the full-time role of the sole CEO of CRM. This can only be good news because it means the company is now back in the hands that shaped it to be the leader that it is.

So this correction was an opportunity to buy into it near $160. Proof of that is that it closed on Wednesday, up 10% from the bottom. Moreover, it’s probably not too late to consider taking a position in CRM stock, even if it’s not the perfect bottom. When a stock suffers a correction this fast, it shakes out the weak hands. So the remaining owners of it would have more conviction and are, therefore, harder to spook.

Nevertheless, we are still within an earshot of the all-time highs, so there is definitely not a reason to rush and go all in on any stock. Fundamentally, CRM is not cheap. It sells at a massive trailing price-to-earnings ratio (192x), but only 8x sales. I say only eight times because in terms of hyper-growth stocks, it is relatively cheap. Shopify, for instance, is six times more expensive from that perspective. Wall Street will ignore value for as long as management keeps delivering the growth. There is no reason to believe that CRM will slow down anytime soon. 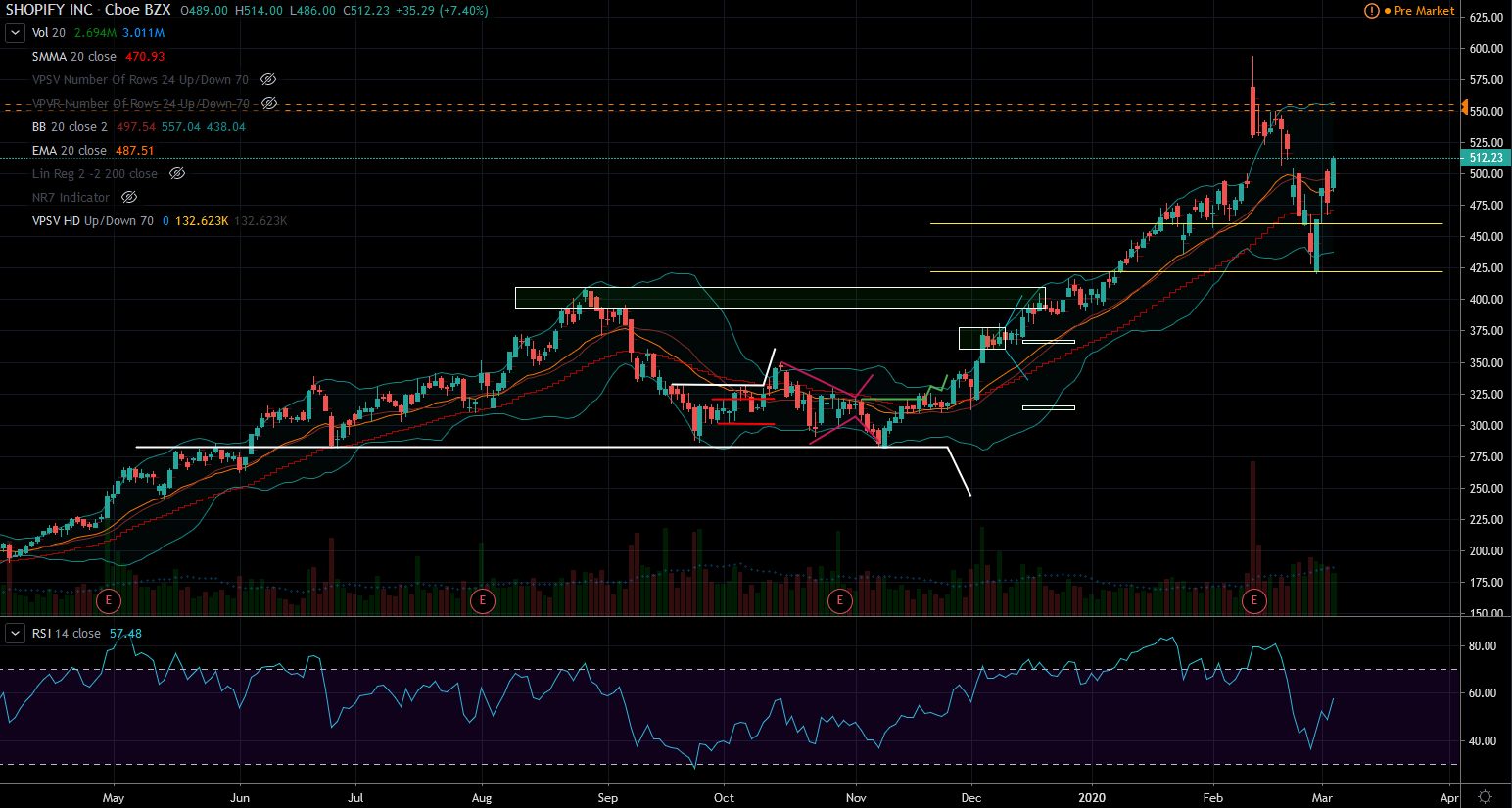 Shopify is an incredibly successful Canadian company. The stock is really expensive, but only if you evaluate it as a mature company, which it isn’t. Investors should give it time to grow into its valuation. So fans of the stock should just buy it and hold it for the long term.

Shopify is delivering incredible growth and following in the footsteps of the father of e-tail Amazon (NASDAQ:AMZN). Only this time, Shopify has the added advantage of the whole world migrating to online transaction. Whereas Amazon was blazing a trail through thick brush. It was not only fighting its own fight, but it also needed to convince people to use online retail. So in essence, SHOP owes Amazon a gigantic “thank you” for clearing the path.

The end result here is that Shopify is firing on all cylinders. So all major dips in the stock have been buying opportunities. I expect that to continue for the longer term. Since they don’t ring bells at tops and bottoms on Wall Street, it takes a lot of courage to buy into a stock that could be this frothy. On the way up, it appears precariously perched. On the way down, it looks like a falling machete.

Consequently, most investors are afraid of touching it. To that, I am confident that if the stock markets are higher in the future, then so are SHOP and CRM. Roku, on the other hand, I fear the story is not as strong. It has been in business for 17 years and still hasn’t turned a profit. I understand that in the last few years, the environment has changed drastically to help it. But nevertheless, I do have some doubt, yet not enough to short it.

So if I were to number these three hot stocks in order of preference today, I would go with Shopify first, Salesforce second and Roku last.