Stocks dropped from the opening bell on Thursday as the fears about the corona virus returned to global markets. The indices did rally to close well off their lows of the day and the Russell even managed to log a small gain of 0.21%.

The sectors were more evenly split than I would have expected as six moved lower and four moved higher.

The tech sector dropped 1.04% as the worst performer and it was followed closely by the communication services sector with a loss of 1.02%.

The utilities sector led the way on Thursday with a gain of 0.36% and the materials sector moved up 0.17% as the second best performer.

The scans turned in a negative result for the fifth straight night.

There were 54 stocks on the bearish list and 15 on the bullish side.

Today’s trade idea is a bearish one on chemical producer Chemours (NYSE: CC). The stock appeared on the bearish list and its fundamental ratings are only average with an EPS reading of a C and an SMR rating of a C. 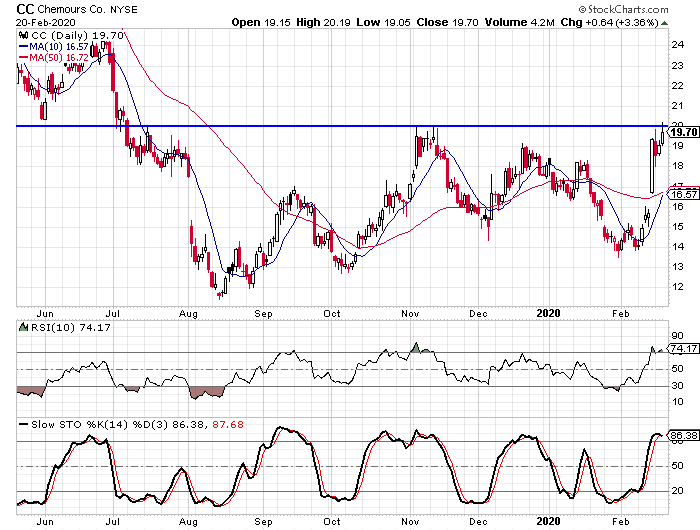 The daily chart shows how the company hit resistance at the $20 level back in November and I think the stock could face trouble there again. The 10-day RSI and the daily stochastic indicators are both in overbought territory, but the stochastic indicators made a bearish crossover last night.

Buy to open the April 21-strike puts on CC at $2.80 or better. These options expire on April 17. In order for these options to double the stock will need to drop to $15.40. The stock dropped below the $15 level back in December and again in January meaning it won’t have to break to a new low to hit our target. I suggest a target gain of 100% with a stop at $20.50.

Leading news source says this has created 20,000 millionaires [sponsor]
Something big is happening in America... and almost no one is paying attention. A multimillionaire has written a fascinating analysis explaining how so many are now getting rich. His write up is posted free on this website here...