The indices gapped higher Wednesday morning after several central banks took action to ease monetary policies. All four jumped out of the gate and then moved even higher until the last hour of trading when they dropped a little.

Seven of the 10 main sectors moved higher on Wednesday.

The energy sector led the way when it jumped 1.33%.

The utilities sector fell 1.08% as the worst performer while consumer staples (0.11%) and industrials (0.04%) joined it in negative territory.

My scans remained negative on the day, but the results were as negative as what we saw on Tuesday. There were 50 names on the bearish list and nine on the bullish list.

The barometer dropped a little further in to negative territory with a reading of -55.8. The final reading on Tuesday was -53.5.

Despite the large number of stocks on the bearish list, there was only one that looked like a decent setup, but the option pricing didn’t make sense. That left a stock from the bullish list that I liked the look of the chart, the fundamentals, and the option pricing. The company is Apollo Global Management (NYSE: APO) and it gets a 76 on the EPS rating system and a B on the SMR grading scale. 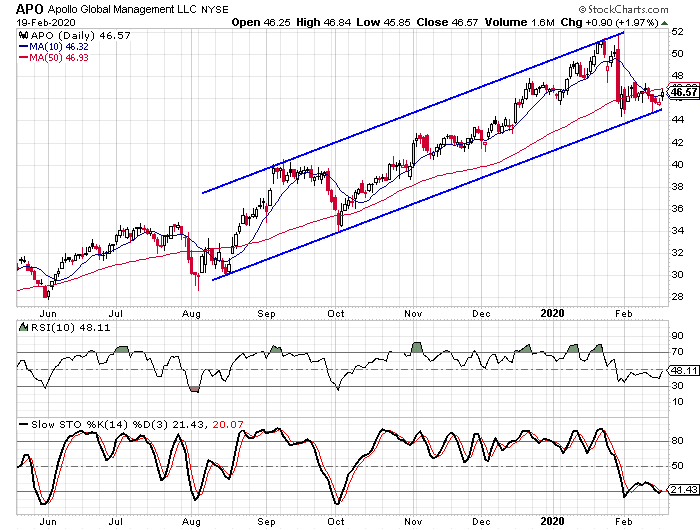 The daily chart shows how the stock has been moving higher over the last six months and a trend channel has formed that defines the various cycles within the overall trend. The stock just hit the lower rail of the channel and looks poised to bounce. We also see that the stochastic indicators are near oversold territory and made a bullish crossover last night.