Shares of Amazon (NASDAQ:AMZN) appear to have hit a ceiling after a massive post-earnings rally. Amazon stock has risen 6% so far in February and is starting to pull back.

Certainly some of the move higher was warranted, given the solid earnings report.

But the red-hot rally is now ready to cool.

Amazon reported earnings on Jan. 30 that were a beat on both the top and bottom line.

Earnings per share handily surpassed expectations, coming in at $6.47 versus consensus estimates of $4.03.

Revenues were also impressive with $87.4 billion in sales topping expectations of $86 billion.

Amazon stock once again exceeded a $1 trillion market capitalization. The last time it saw such a lofty valuation was September 2018, which marked a major top in the stock. Given the enormous size of the company, future growth rates will be difficult to maintain simply due to the law of large numbers. This should provide a serious headwind in the intermediate term.

Amazon CEO Jeff Bezos recently purchased a Beverly Hills mansion for $165 million. This came on the heels of news that he sold over $4 billion in Amazon stock in the previous quarter. This is reminiscent of the tech boom of the late 1990s which didn’t end well. It is also a sign that the frothiness and exuberance has reached an extreme.

A Look at the Chart

Amazon stock reached extremely overbought readings on a technical basis before finally showing some push back. The nine-day relative strength index (RSI) breached the 85 level for just the second time in the past year. The previous instance marked a significant short-term top in the stock. Moving average convergence/divergence printed at by far the most extreme reading in the past 12 months, but has turned lower.

Bollinger Percent B raced above 140 before it too weakened considerably. Amazon is trading at the largest premium to its 100-day moving average in the past year. Prior times when this occurred inevitably led to a pullback to the average. 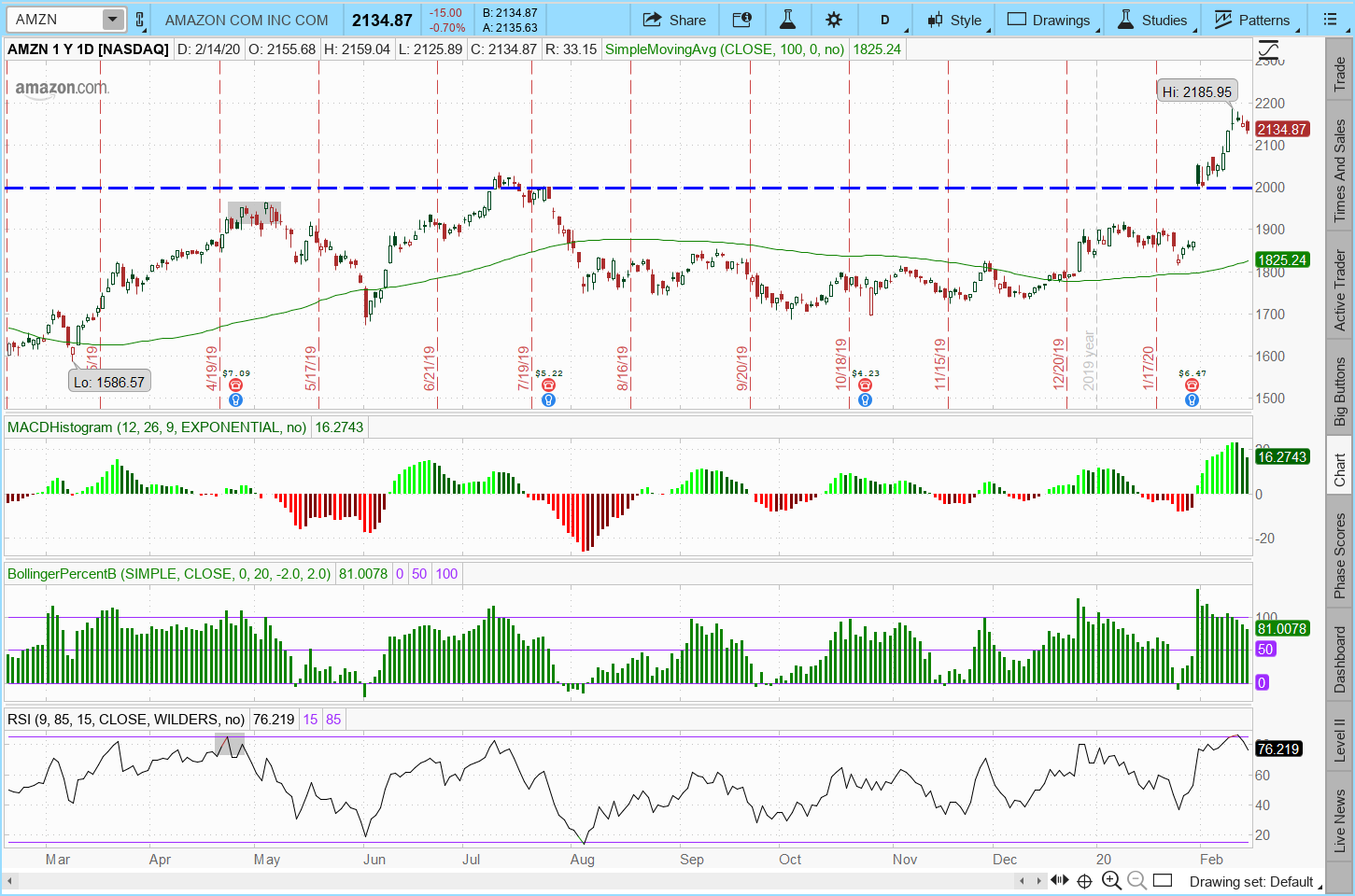 Most importantly, shares saw a doji pattern form last week. Amazon opened at $2,150 last Tuesday before heading higher to new all-time highs of $2,185.95. Amazon shares failed to hold on to those gains, however, and ended up closing back down at the $2,150 area. This type of price pattern, called a doji, is often a sign that the trend has come to an end. The buyers have become exhausted and the sellers are in control. It is even more powerful given the magnitude of the recent rally in Amazon stock.

In my previous analysis on Amazon from last November, I had a decidedly bullish outlook. Expectations for an upside breakout after a long period of consolidation came to fruition. Now that Amazon stock has ripped to new all-time highs, my viewpoint has changed — price does matter. Look for Amazon to retest the $2,000 breakout area over the coming weeks.

How to Trade Amazon Stock

Stock traders should look to short Amazon stock on any strength. The initial profit objective would be a move back to that $2,000 retest level. A meaningful breakout to new highs past the $2,200 area serves as a viable stop-out point.