On Monday, during my weekly sit-down with America’s most-watched business TV host, Stuart Varney, the topic of a flight to safety came up. A flight to safety is when investors sell what they perceive to be higher-risk investments for safer ones.

But Stuart didn’t want to know about your traditional, run-of-the-mill flight to safety in assets like gold or U.S. treasuries.

Instead, he asked about one of the newer assets available to investors these days…

Stuart mentioned that Bitcoin had recently reached its highest level since October, and he asked me if the cryptocurrency’s big move up since early December was due to a flight to safety over coronavirus concerns.

Stuart is likely correct that the coronavirus scare has led many to seek a safe haven that can still deliver profits in the event of a market downturn.

But there’s a major Reality Gap that has formed between what investors believe Bitcoin will do in a market downturn or recession and how the cryptocurrency will actually perform.

Here’s what I mean…

A Crypto Safe Haven Is a False Notion
The problem starts with how certain “experts” or “analysts” are talking about Bitcoin – specifically about how it’ll perform in the face of a market pullback.

For example, I recently came across this quote from Nigel Green, chief executive of the financial advisory deVere Group, who said…

“The more individual [coronavirus] cases that are identified, the more countries around the world that are affected, and the greater the impact on traditional financial markets, the higher the price of Bitcoin has jumped.”

“As trust in global institutions and markets continues to deteriorate, we will see highly mobile digital assets like Bitcoin explode in value.”

The issue that I take with quotes like these (which can be found in numerous financial publications) is that they give investors the impression, whether intentionally or not, that cryptocurrencies like Bitcoin are bound to rise when traditional financial markets fall.

And therein lies the fallacy.

As I told Stuart on Monday, Bitcoin is not correlated to the S&P 500 (the broadest of the major indexes, and a proxy for the U.S. stock market), and I’ve got the data to prove it…

What the Data Says About Correlation
Two things are correlated if they move in the same direction at the same time. This would be the case almost all the time for the S&P 500 and the Nasdaq. They both tend to move up and down at the same time, though one might move more in that direction for any given time frame.

Here’s a chart that I typically use to measure the correlation of two instruments: 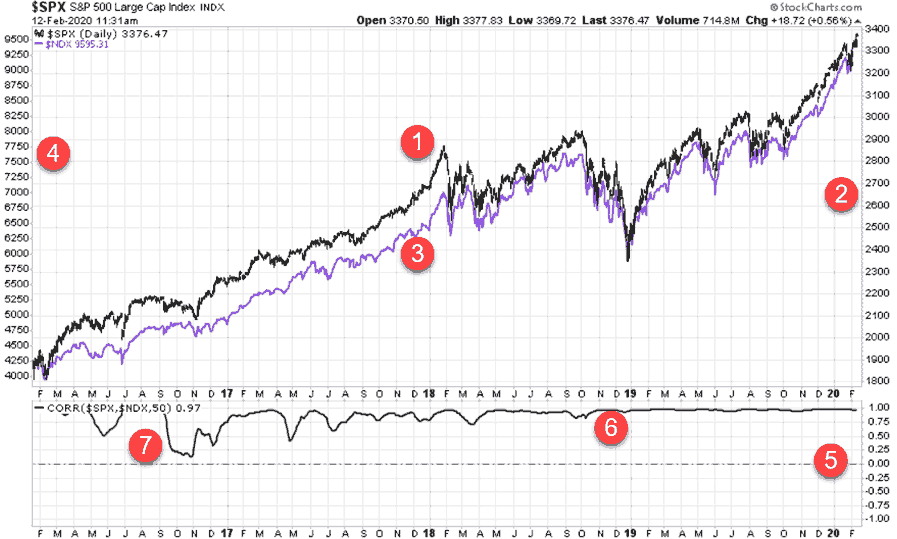 Notes for Red Circles above:

3 & 4: The purple line is the Nasdaq index, and No. 4 shows its scale on the left side of the chart.

6: This line shows that the S&P 500 index and the Nasdaq are highly correlated. You can see the correlation between the two is typically in the high 0.90s.

7: Periods of lower correlation do happen, like in the fall of 2016 when the mega-tech stocks like Facebook Inc. (NASDAQ: FB), Amazon.com Inc. (NASDAQ: AMZN), and Alphabet/Google (NASDAQ: GOOGL), which affect the Nasdaq more heavily, swooned while the S&P 500 held steady. But you can see that for almost all periods, the correlation is very high.

Now, let’s look at that same chart showing the correlation between the S&P 500 (black line) and Bitcoin (purple line): 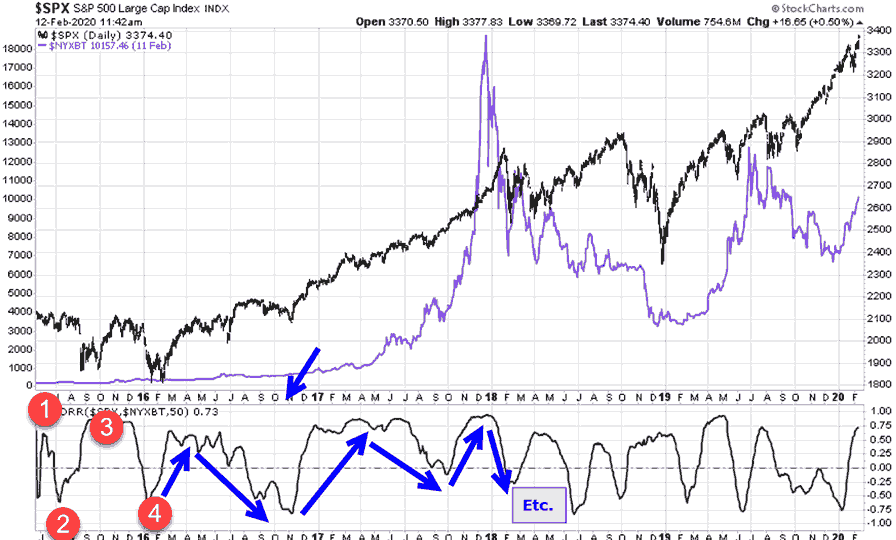 And the blue arrows show the S&P 500 and Bitcoin bouncing between modest correlation and inversely correlated for the rest of the chart. That is exactly what non-correlated asset classes do!

Let’s take a look at an even shorter time frame. Here’s that same style chart, but only showing the last six months for a more granular look: 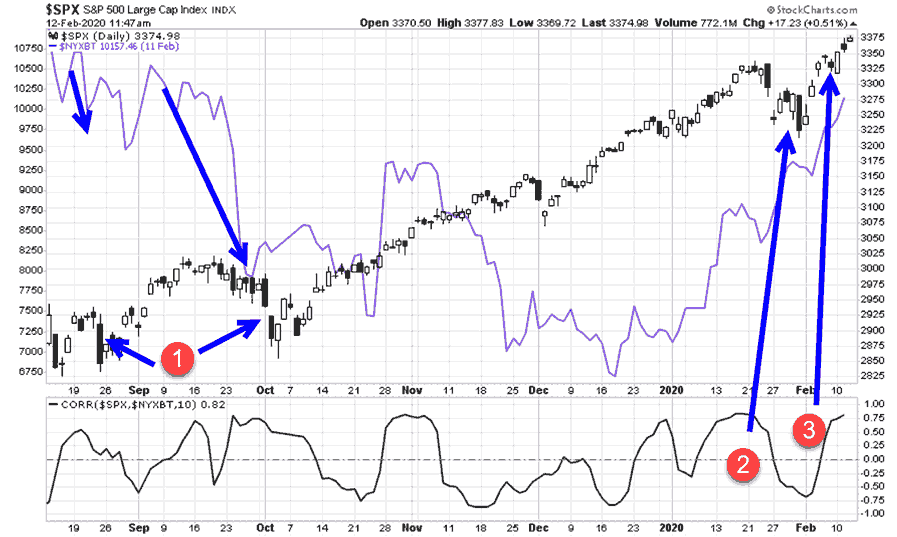 1. In August and September of last year, stocks sold off on China trade war fears. What was Bitcoin doing? Selling off also. So, Bitcoin was definitely not treated as a “flight to quality” asset there…
2. Unlike the previous risk-off trade, Bitcoin did climb at the time the market dropped due to coronavirus fears in late January. But as we’ve seen, this is a classic correlation (or actually inverse correlation) without causation error. It’s an observation without any foundation in reality. Because…
3. In the most recent short-term market drop at the No. 3 circle, Bitcoin prices actually slowed down too.

The bottom line is this: I like the idea of having some cryptocurrency exposure in my portfolio, and I do. If it meets your risk tolerance, you might add some exposure to your portfolio, too.

But don’t do it because you think crypto is a safe haven – it is not, and the numbers show it is not.

Do it instead because of the longer-term upside potential of the asset class.

Main Street Hero Gives Away the Killer New EXTRA INCOME Strategy That Made Him Rich [sponsor]
Every day Americans have been making 100%, 200%, 500% or more…sometimes in a matter of days with this one new strategy. Some of them retiring from their jobs because of it. Others have paid off all their debt, and bought their dream homes.