With the Nasdaq courting record highs daily, you would think low-risk opportunities are drying up. As it turns out, you are half right. Some tech giants like Amazon (NASDAQ:AMZN) and Microsoft (NASDAQ:MSFT) are indeed overstretched and tough to chase.

But not Apple (NASDAQ:AAPL)! Apple stock is on the brink of a breakout and might be one of the tastiest looking trades of the bunch.

And you better believe it’s on the radar of active traders everywhere.

Last year’s 86% gain proved the aging giant still knows how to party and can wow the momentum crowd when it wants to.

While its peers, like the aforementioned AMZN and MSFT, have been flying high, Apple stock has spent the past month in digestion mode.

The respite was well-deserved, no doubt, but also necessary.

It allowed weak hands to wash out via profit-taking and a new base to form. The next advance now has a sturdy foundation to launch from.

Apple Stock Charts
Last year’s fourth-quarter push jammed Apple’s valuation into the stratosphere alongside its stock price. Cautionary comments surged, warning of the lofty price tag. I even tossed my hat into the ring. Fast forward five weeks and the stock hasn’t really budged. The beauty of a multi-week pause is it allows overbought conditions to ease and more palatable entries to develop. 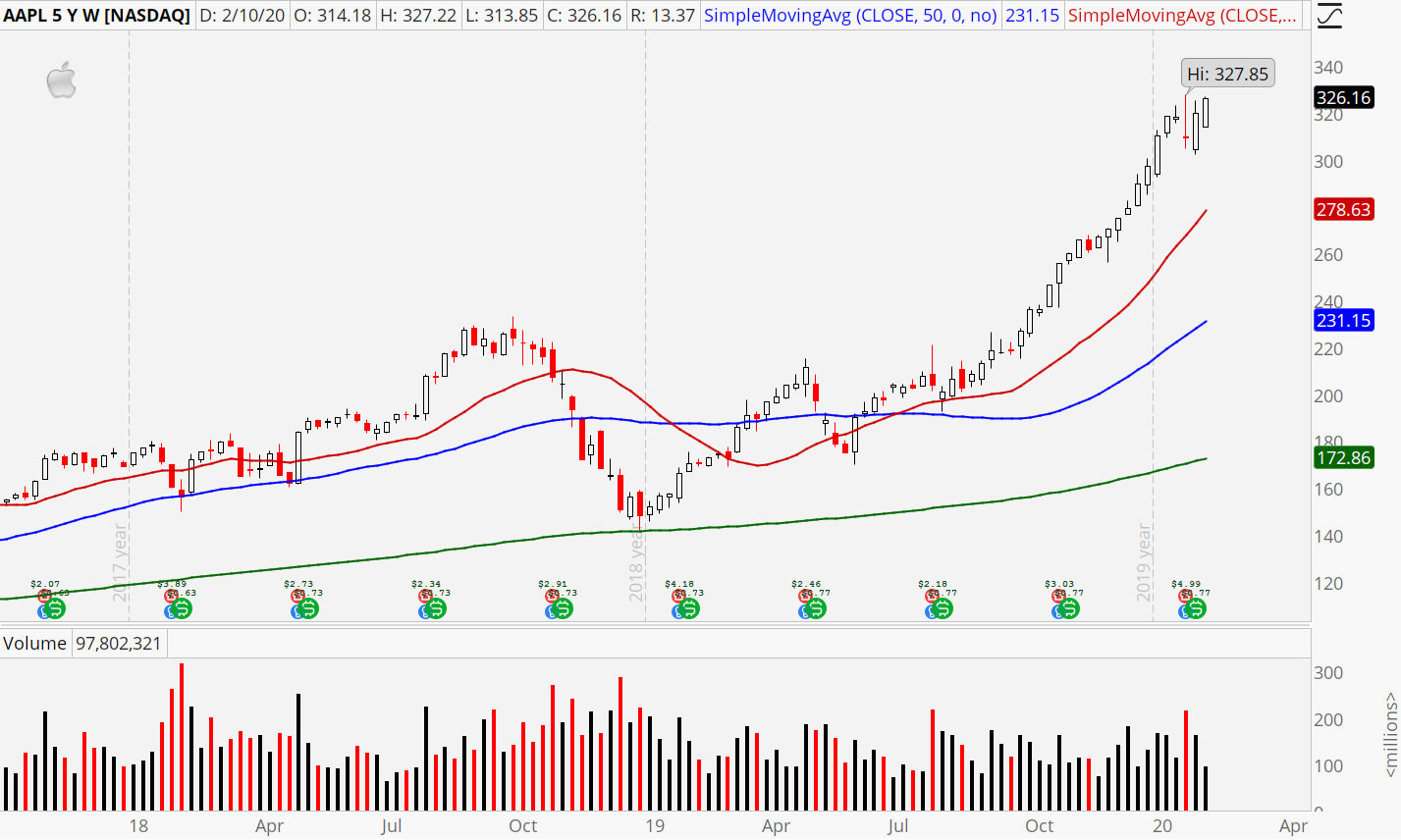 The weekly time frame is still gloriously bullish. Sellers had their chance to take a bite out of Apple shares with the scare surrounding the China coronavirus. And they failed miserably. Sure, AAPL stock experienced a 7.8% peak-to-trough drop, but it was much more benign on a closing basis and, perhaps more importantly, it was over as quickly as it began.

Throughout the entire episode, we only saw two (two!) closes below the 20-day moving average. The daily view reveals the 20-day still rising in bullish fashion. And with resistance looming overhead, it’s decision time! Either Apple finally breaks out of its consolidation pattern and joins its tech brethren at record highs. Or it slips below the 20-day, and a more severe pullback develops. 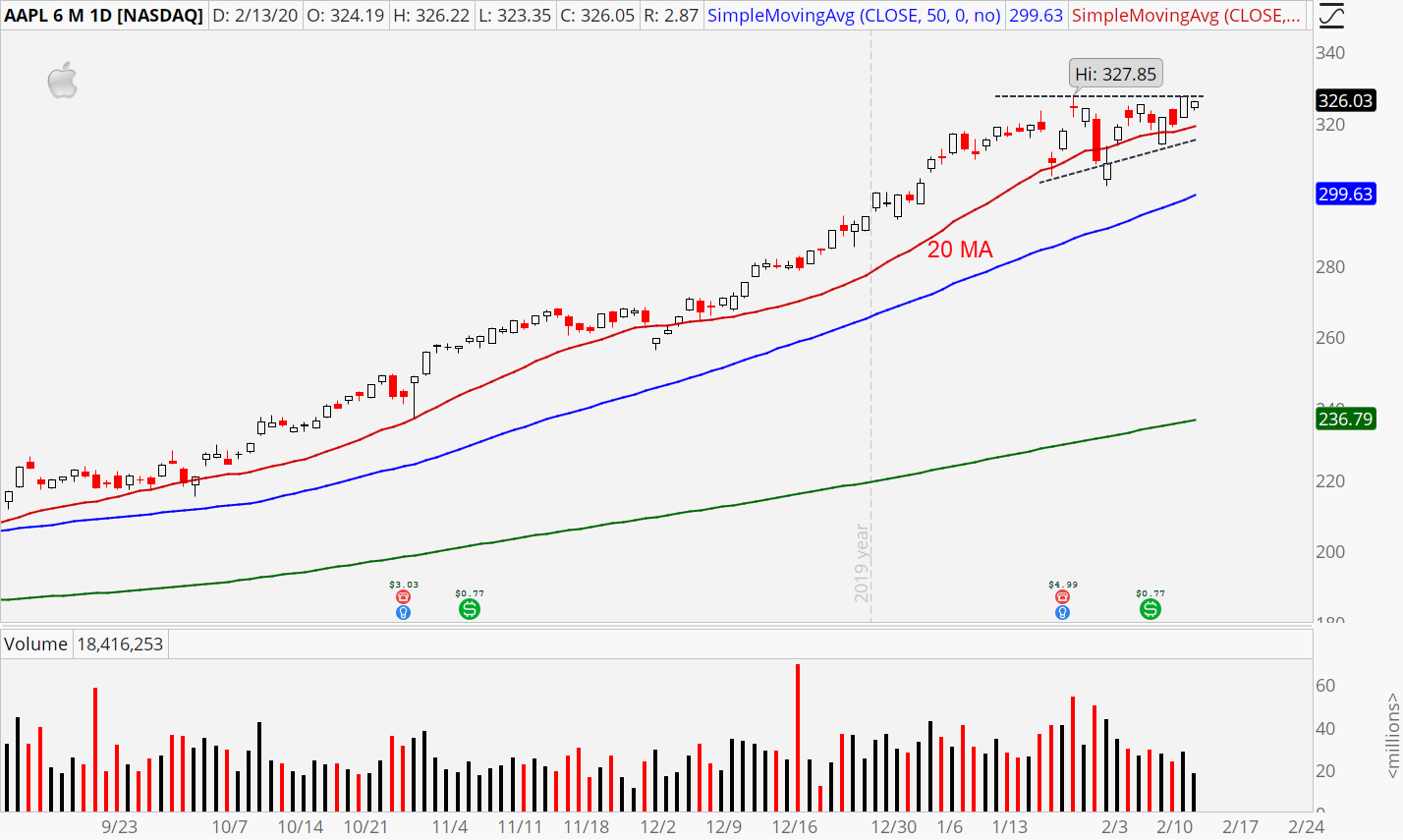 Given the resilience of the broader market, don’t you have to bet on the former? A climb above Wednesday’s high of $327.22 is as good a trigger as any if you want confirmation that buyers are pressing their advantage.

Options Offer a Smart Play
Implied volatility is retreating from its pre-earnings surge but is still high enough to make spreads preferable over buying options outright. Plus, at $326, Apple is probably too rich for most traders to buy call options comfortably.

Bull call spreads have worked well for AMZN, MSFT, and even Alphabet (NASDAQ:GOOGL, GOOG) in recent weeks, so I think it’s a smart play for Apple as well.

The risk is limited to your initial cost and will be forfeited if AAPL sits below $330 at expiration. To minimize the loss, consider exiting on a break of support near $305. The max reward is $6.50.

This Stock is on the Brink of a Breakout

This Stock is Poised for More Upside

What You’re Being Told About Bitcoin Prices Is Wrong

Now’s the Time to Own These Four Stocks

These 3 Mid-Cap Growth Stocks Are a Buy