Three of the four indices moved lower on Thursday as fears regarding the corona virus spreading more rapidly took their toll on stocks. All four indices opened lower and actually rallied after hitting their lows in the early morning. Only the Russell was able to reach and stay in positive territory with a gain of 0.26%.

Seven of the 10 main sectors dropped on Thursday with the industrial sector taking the worst loss at 0.56%.

The healthcare sector fell 0.47% as the second worst performer.

The utilities sector led the way with a gain of 1.11% and it was joined in positive territory by its fellow defensive sector consumer staples with a gain of 0.59%.

The communication services sector moved up 0.02% as the third one in the black.

My scans flipped again last night and the results showed 27 names on the bearish side and 11 on the bullish side.

Despite the negative result, the barometer rose slightly, moving from -14.2 to -12.5.

Today’s trade idea is a bearish one and it is on a company that I have suggested playing options on several times in the past—Philip Morris International (NYSE: PM). The company’s EPS rating is a 49 and it doesn’t have an SMR rating at this time. The return on equity isn’t calculable at this time and that is why there isn’t an SMR rating. I can tell you that the sales growth is minimal for the company and the profit margin is below average. 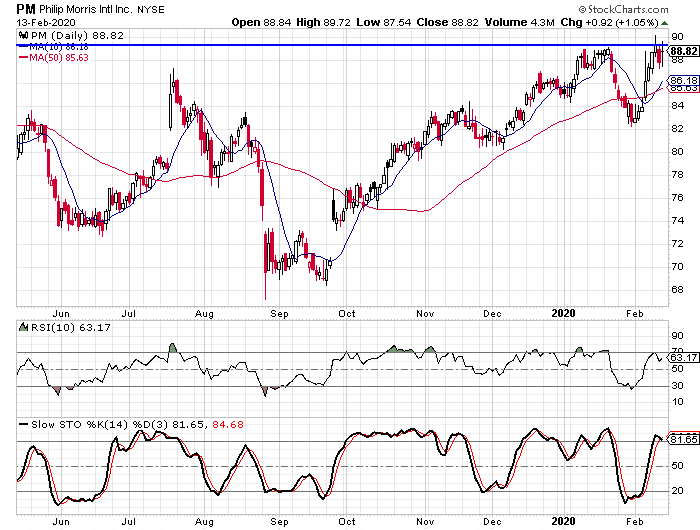