Nine of the 10 main sectors moved higher on the day with only the consumer staples sector failing to gain ground. The sector only lost 0.05%, but it was still the only one in the red.

The energy sector led the way again with a gain of 1.34%.

The communication services sector moved up 1.3% as the second best performer and the tech sector (1.08%) and consumer discretionary sector (1.02%) gave us four sectors with gains over 1.0%.

My scans changed course a little and turned a positive result for the first time in four days.

There were 31 names on the bullish list and 17 on the bearish side.

The barometer jumped considerably on Wednesday, but it remained in negative territory with a reading of -14.2.

Today’s trade idea is another bullish one and this time the subject company is Stoneco (Nasdaq: STNE). The company scores an 84 on the EPS rating system and it gets an A in the SMR grading scale. 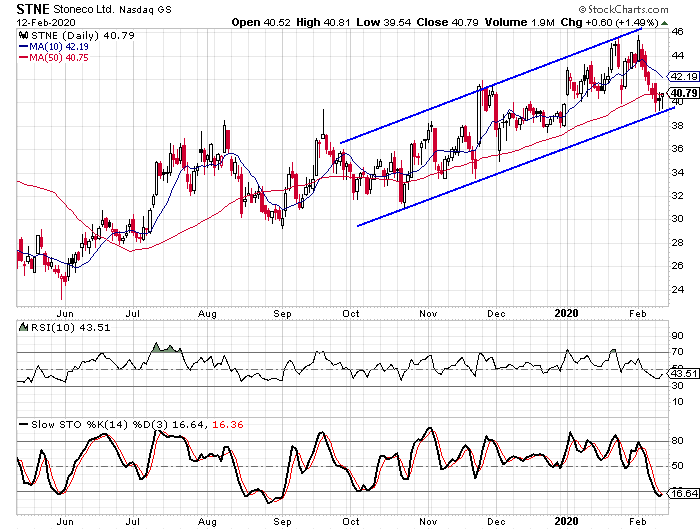 Looking at the daily chart for Stoneco we see that the stock has been trending higher since last June. A trend channel has formed over the last four months and the stock just bounced off of the lower rail of the channel. We also see that the daily stochastic indicators are in oversold territory for the first time since August and they made a bullish crossover last night.

Leading news source says this has created 20,000 millionaires [sponsor]
Something big is happening in America... and almost no one is paying attention. A multimillionaire has written a fascinating analysis explaining how so many are now getting rich. His write up is posted free on this website here...