Stocks were a little mixed on Tuesday with three of the four main indices moving higher and one moving lower. All four started out in positive territory, but the Dow ended with a loss of 0.48 points—not percent, but points.

Seven of the main sectors moved higher on the day while three moved lower.

The energy sector was the biggest gainer with a move or 1.14% and it was followed by the consumer discretionary sector with a gain of 0.78%.

The consumer staples sector was the worst performer with a loss of 0.37% while the tech sector fell 0.32% as the second worst.

The communication services sector dropped 0.09% as the third group to finish in the red.

The barometer moved further in to negative territory once these results were added in. The final reading was -29.1, down from -13.9.

Even though the barometer moved lower and the scans produced a greater number of bearish signals than bullish ones, today’s trade idea is a bullish one. Merck (NYSE: MRK) was on the bullish list and the company’s fundamental ratings are really good with an EPS rating of 86 and an SMR rating of A. 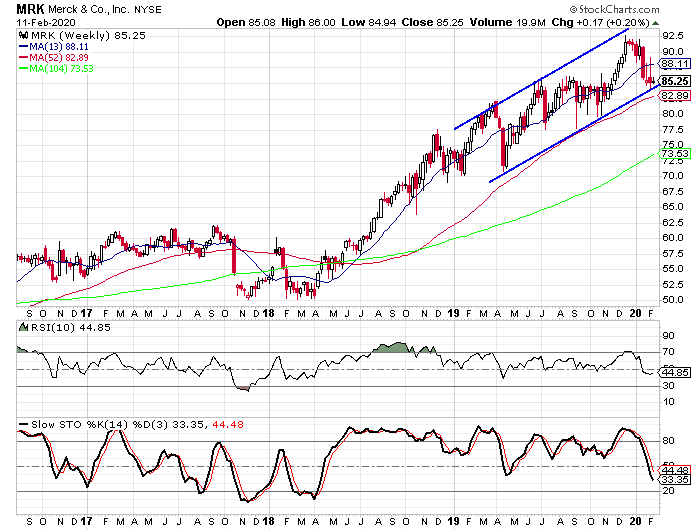 The daily stochastic indicators made a bullish crossover last night, but I thought the weekly chart did a better job of depicting the current setup for Merck. We see that the stock has been trending higher since last April and a trend channel has formed. The stock just hit the lower rail of the channel and appears ready to turn higher once again.