The rally slowed a little on Thursday as three of the four main indices moved higher while on lost ground on the day. The Russell dropped 0.27% on the day and was the lone index in the red.

Even the gains on the other three were far smaller than what we have seen in the first part of the week. The Nasdaq notched a gain of 0.67% on the day and that was the top performance. The S&P moved up 0.33% and the Dow tacked on 0.30%.

The communication services sector jumped 1.25% and a great deal of the gain can be attributed to Twitter’s 15% jump.

The tech sector gained 0.91% as the second best performer.

The energy sector fell 1.02% and that was by far the worst performance of the bunch.

The consumer discretionary sector fell 0.22% as the second worst result.

My scans were rather quiet last night with only nine names on the bullish list and seven on the bearish side.

The barometer dropped slightly with the relatively even distribution between the two lists. The final reading on Thursday was 27.2, down from 36.3 on Wednesday.

For the fourth straight day I have a bullish trade idea for you. The subject of today’s trade idea is Sysco Corp. (NYSE: SYY). The food distribution company gets a 91 on the EPS rating system and a B on the SMR grading scale. 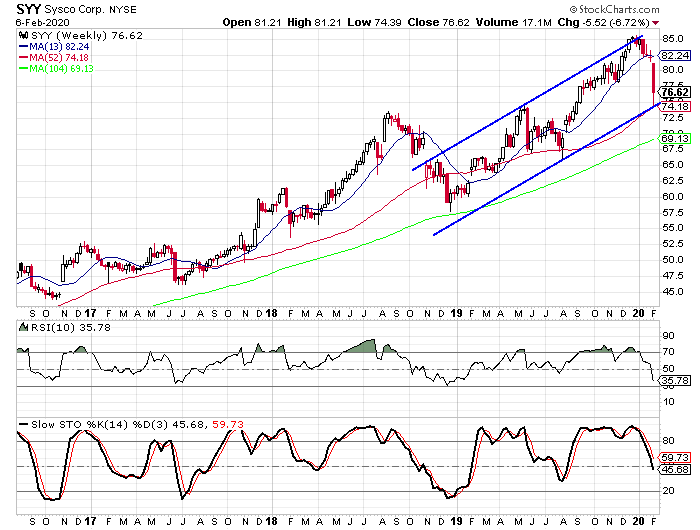 The weekly chart showed the upward trend better than the daily chart and we see how the stock just hit support at its 52-week moving average. The daily stochastic indicators hit oversold territory before making a bullish crossover last night. Between the moving average, the lower rail of the trend channel, and the bullish crossover from the daily stochastic readings, I look for the stock to move higher in the coming weeks.