Stocks continued to rally on Wednesday and all four of the main indices saw gains. Three of the four saw more significant gains than the fourth one. The Nasdaq lagged the other three indices but still gained 0.43%.

All 10 of the main sectors moved higher on the day with the energy sector leading the way.

The financial sector moved up 2.0% as the second best performer.

The communication services sector only gained 0.15% and that was the smallest gain of the bunch.

The sector was held back by Alphabet’s post-earnings performance. The second smallest gain came from the utilities sector at 0.41%.

My scans continued to produce large numbers of bullish signals with 68 names on the bullish list last night and only three names on the bearish list.

The barometer rose to 36.3 from 25.1 once these results were added in to the equation.

Today’s trade idea is yet another bullish one as the number of stocks and ETFs on the bullish side continue to outpace the signals from the bearish side. Today’s trade is on Manulife Financial (NYSE: MFC). The company scores a 78 on the EPS rating system and an A on the SMR rating scale. 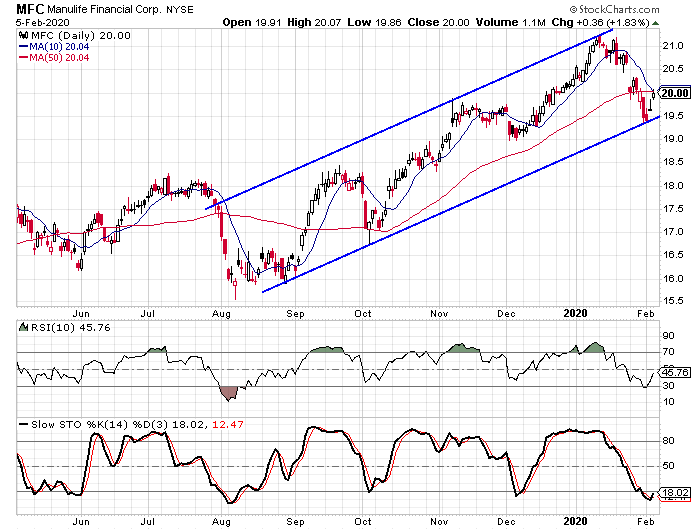 Manulife has been trending higher for the last six months and a trend channel has formed. The stock just bounced off of the lower rail in the last few days as the oscillators hit oversold territory and turned higher. We saw a similar move from the stochastic indicators at the beginning of December and the stock jumped over 10% following that move.

Buy to open the March 19-strike calls on MFC at $1.25 or better. These options expire on March 20. In order for these options to double the stock will need to reach $21.50. That price level is slightly above the high from January, but the upper rail will be well above that price in a few weeks. I suggest a target gain of 100% with a stop at $19.50.