Global equity markets got a major boost on Tuesday as China pumped liquidity in to its market. The gains made their way around the globe and they gave a serious boost to domestic stocks.

[hana-code-insert name=’adsense-article’ /]Nine of the 10 main indices moved higher on Tuesday with the utilities sector dropping an even 1.0% as the only sector in the red.

The tech sector posted a monster gain of 2.62% as the top performer and the industrial sector moved up 1.89% as the second best performer.

The difference of 32 was much greater than the 5 and -3 we have seen in the last few nights.

Even with the bigger positive skew, the barometer fell slightly, falling from 28.5 to 25.1.

There were a number of stocks that caught my eye last night, but the one that made the most sense from the fundamentals, the technical picture, and the risk/reward scenario was on Teradyne (Nasdaq: TER). The company scores a 93 on its EPS rating and an A on the SMR grading scale. 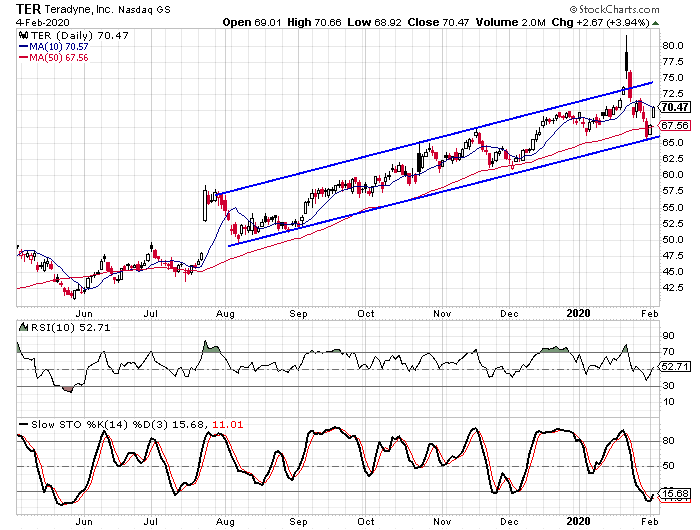 We see on the daily chart how the stock has been moving higher over the past nine months. A trend channel has formed that defines the movements within the last six months and the stock just hit the lower rail of the channel. We see that the daily stochastic indicators reached their lowest level since last May, but the indicators made a bullish crossover last night.