Stocks bounced back a little on Monday, at least here in the states. Overseas action saw Chinese stocks drop the most they had in nearly five years.

All four of the domestic indices gained ground on the day. The Nasdaq gained 1.34% and was the top performer while the Russell gained 1.12% and was the only other one to gain more than 1.0%.

[hana-code-insert name=’adsense-article’ /]Seven of the 10 main sectors moved higher on Monday while two moved lower and one was unchanged.

The materials sector led the way with a gain of 2.10% and it was followed by the tech sector which gained 1.32%.

The consumer staples sector was unchanged on the day.

The energy sector continued to suffer and fell 1.31% on Monday.

The industrial sector fell 0.04% and was the only other sector to lose ground.

My scans flipped back to a positive result with the gains. There were 19 names on the bullish list and 14 on the bearish side.

The barometer continued to move back toward zero as the smaller differences between the two lists bring the reading close to neutral. The final reading on Monday was 28.5, down from 44.8 on Friday.

With the two lists being relatively well balanced, it was up in there whether today’s trade idea would be a bullish one or a bearish one. In the end, the setup that I liked best was on Pfizer (NYSE: PFE). The drugmaker was on the bullish list and its fundamentals were a little above average with an EPS rating of 55 and an SMR rating of a B. 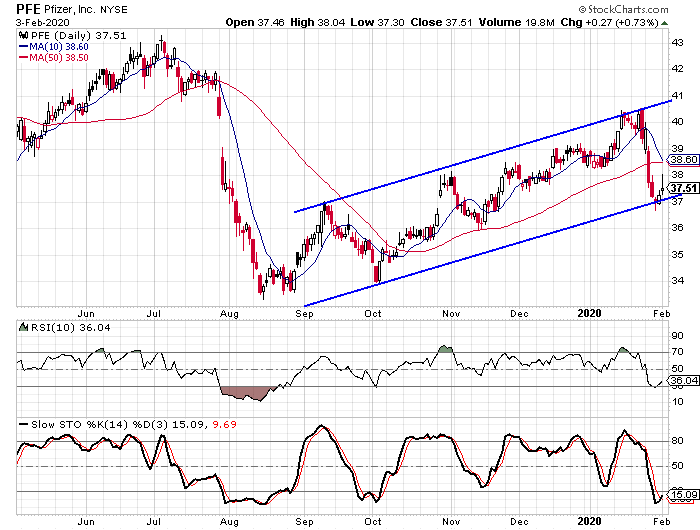 The daily chart shows how the stock has been trending higher over the last five months. A trend channel appears to have formed that has defined the different cycles within the overall upward trend and the stock just hit the lower rail. The daily overbought/oversold indicators were both in oversold territory and have now turned higher.

Buy to open the March 36-strike calls on PFE at $2.10 or better. These options expire on March 20. In order for these options to double the stock will need to reach $40.20.The highs in January were above this level, so it won’t even have to break through the recent highs to hit our target. I suggest a target gain of 100% with a stop at $36.80.