The main indices continued to climb on Friday with all four moving higher. The Russell led the way for a fourth straight day and it wasn’t even close this time. The small cap index jumped 1.02% on Friday.

The second best performance came from the S&P with a gain of 0.39% while the Nasdaq moved up 0.34%. The Dow lagged the other three a little, but still tacked on 0.17%.

Eight sectors moved higher on the day while one fell and one was unchanged. The energy sector dropped 0.64% and the healthcare sector was the one that was unchanged.

Top performance honors went to the communication services sector with a gain of 0.78%.

The utilities sector moved up 0.69% for second place and the tech sector gained 0.67% for third place.

My scans continued to spit out more bearish signals than bullish signals.

The barometer fell to -24.2 after these results were added in to the equation.

Given the difference in the size of the two lists, it was much easier to find a bearish setup that I liked than a bullish one. As a result, today’s trade idea is a bearish one on TripAdvisor (Nasdaq: TRIP). The company appeared on the bearish list and the fundamentals are pretty weak with an EPS rating of 38 and an SMR rating of a C. 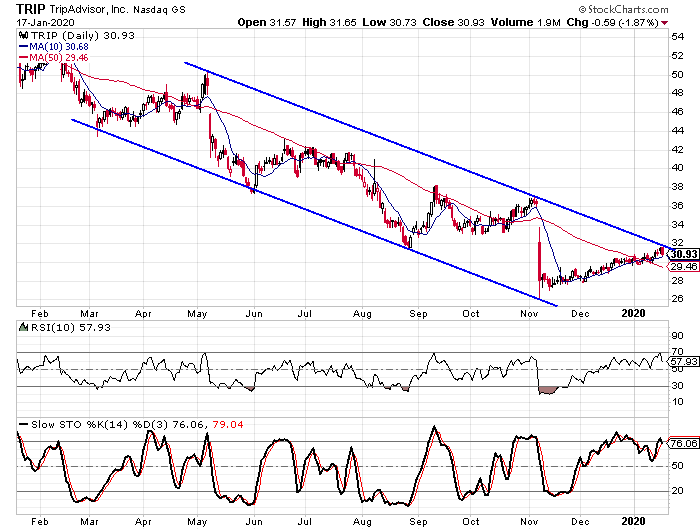 The chart shows how the stock has been declining over the past year and how the downward trend has been defined by a trend channel. The stock hit the upper rail of the channel this past week and the stochastic readings made a bearish crossover at the same time. I look for the stock to move lower in the coming weeks.

Upgrades and Downgrades for Tuesday, 12/1