Tesla has been all over the news lately.

The company has always made my favorite cars in the auto industry, and it’s been a consistent headline-maker from the start, thanks to CEO Elon Musk’s infamous unpredictability.

We’re less than a month into 2020, and already this year has seen some Tesla-related stories that I couldn’t have made up even if I’d tried…

I’m talking about headlines like Watch Elon Musk Dance Like Your Drunk Uncle and Tesla Cars Will Soon Be Able to Talk.

But these claims are more than just click-bait shenanigans.

You see, there’s a reason Musk gets away with his impulsive behavior – he has the success to back it up.

Beneath this year’s unbelievable headlines, something big is happening in the world of Tesla.

And it could make you just as rich as Musk himself.

Tesla’s Record-Breaking Numbers Are the Key to Your Next Profit
The last time we talked about Tesla Inc. (NASDAQ: TSLA), the stock was trading around $221, down 27.5% year-to-date. That was just a little bit over three months ago. Now, the stock has more than doubled.

On Monday, shares broke $500 for the first time, hitting a level that’s never been seen by a U.S. automaker before. Since its 52-week low in June, shares of TSLA have risen over 160%. Its market cap now sits at about $90 billion, almost $5 billion more than General Motors Co. (NYSE: GM) and Ford Motor Co. (NYSE: F) combined.

This makes TSLA the most valuable U.S. automaker in history. And its stock price isn’t the only thing that’s rising. TSLA’s 2019 sales increased by a whopping 50% in 2019. The electric car company’s growth is undeniable at this point. All you need to do is look at its fast-climbing stock chart to prove that… 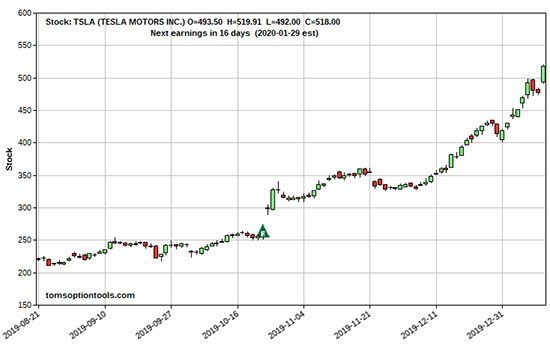 The only question that remains is the driving factor – and whether it can last.

TSLA’s recent jump all started on October 23, when the company reported third-quarter results that shocked Wall Street. Estimates from analysts sat at a loss of $0.42 per share. But TSLA reported a $1.86 profit instead. And over the following two trading days, the stock gained almost 30%.

Since then, TSLA has been on a tear. In September, we talked about TSLA‘s tax exemption in China. And now, it has the country to thank yet again for its latest success…

You see, China is the biggest market for electric vehicles in the world. Last year alone, 1.3 million new energy vehicles were sold there. And TSLA is infiltrating that market. The company’s first China-made cars, developed in TSLA’s new Shanghai factory, were delivered at the beginning of January – the reason behind Musk’s now-famous “drunk uncle” dancing. Now, there are talks of adding the Model Y, TSLA’s lower-priced SUV, to the factory as well.

But that’s not all. Musk also plans to open a design center in China, modeled after the Shanghai factory, with the intent to create an “original car” for sale around the world.

There’s a clear demand for electric vehicles in China, and Musk is taking advantage of it – making TSLA stock rich with profit opportunity as a result.

Look at it this way – since TSLA’s closing low in June, short-sellers have lost $7.6 billion on a mark-to-market basis. But by going long on the electric car maker, you can take a chunk of that billion-dollar change for your own wallet.

I’m not talking about simply buying and holding the stock. I mean, sure, that’s a good strategy. If you’d bought the stock just three months ago, you already would’ve doubled your money.

On October 7, 2019, TSLA was trading around $237.72. Now, if you’d bought 100 shares of the stock, you would have dropped $23,772. And you would have had to spend months without that cash in your bank account before you would have doubled your money.

Instead, my readers bought a call option on the stock. And they only spent $2.93, or $293 for control over 100 shares. They didn’t have to wait months to see a nice-sized return on their investment. Just one day later, TSLA had risen to trade around $240.05. And they sold their call option for $5.86, banking a 100% gain in just one day.

With cash that fast, you could have simply rolled your winnings into another option, then another, and so on and so forth. Instead of waiting months to double your money, you could have spent that time doing it over and over again.

Now, with all this explosive growth, TSLA’s options are pretty expensive right now. But the stock is due for a healthy pullback – meaning your call option will be affordable and ready to churn out an impressive profit for your wallet.

You know what they say… buy the rumor, sell the news. If you play it right, you’ll be dancing like Elon Musk all the way to your first million dollars.

Have a great weekend,

Main Street Hero Gives Away the Killer New EXTRA INCOME Strategy That Made Him Rich [sponsor]
Every day Americans have been making 100%, 200%, 500% or more…sometimes in a matter of days with this one new strategy. Some of them retiring from their jobs because of it. Others have paid off all their debt, and bought their dream homes.