Stocks resumed their rally on Thursday and all four of the main indices saw significant gains. The Russell led the way for a third straight day and this time the gain was 1.36%. The Nasdaq moved up 1.06% and was the second best performer on the day.

All 10 sectors moved higher on Thursday with the tech sector leading the way with a move of 1.34%.

The industrial sector came close to giving us a second sector with a gain of 1.0% or higher, but came up just short at 0.99%.

The smallest gain on the day came from the energy sector at 0.17%.

The second smallest move was the consumer staples sector and it was up 0.27%.

Because so many stocks are in overbought territory at this time, my scans produced another negative result. This time there were 28 names on the bearish list and 13 names on the bullish side.

Today’s trade idea is a bullish one and it is on the ProShares Ultra Bloomberg Crude Oil ETF (NYSE: UCO). The fund was on the bullish list on Thursday night and it got a bullish signal from Tickeron’s Trend Prediction Engine. The signal showed a confidence level of 88% and 92% of past signals have been successful. 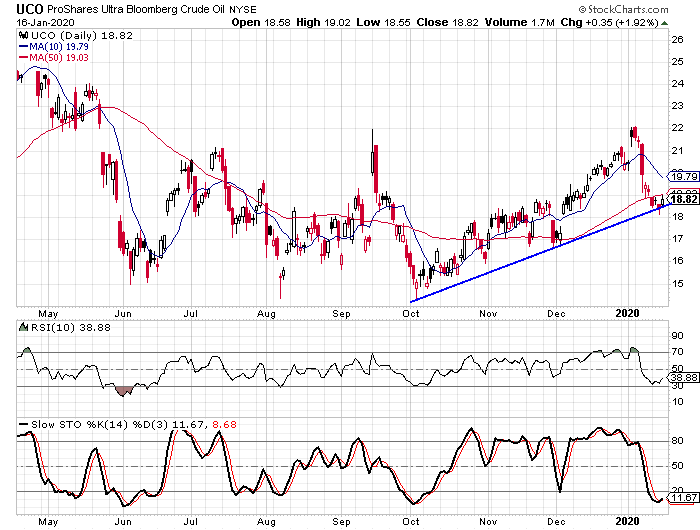 We see on the chart that the fund has been moving higher since early October. By connecting the lows from October and early December, we get an upwardly sloped trend line. UCO dropped below the trend line on Wednesday, but didn’t close below it. The fund also formed a reversal pattern with Wednesday’s candle. The daily stochastic readings are in oversold territory and made a bullish crossover last night.

Buy to open the February 18-strike calls on UCO at $1.70 or better. These options expire on February 21. In order for these options to double the fund will need to reach $21.40. The fund peaked near $22 earlier this month and I look for it to challenge that level once again. I suggest a target gain of at least 100% with a stop at $18.05.