Wall Street finally got over its fears from 2019 over the tariff wars and their impact on global business. This is not the same as saying that the threat is gone, but for now investors are no longer focused on it, therefore Chinese stocks are free to rally.

Case in point: iShares China Large-Cap ETF (NYSEARCA:FXI), Baidu (NASDAQ:BIDU) and Alibaba (NYSE:BABA) are all up sharply since November.

But some are still lagging longer term.

For now, gone are the days when BIDU was cratering with no end in sight.

Now the experts are playing catch up.

The opportunities are great, but so are the pitfalls.

Although I am not completely bearish on any of these stocks.

In fact, long-term they should all be higher in the future and could make for good investments. I am leery of blindly chasing the upside from here without further investigation. I consider today’s note to be one of optimistic long-term bets but from proper levels so to avoid short-term pain. 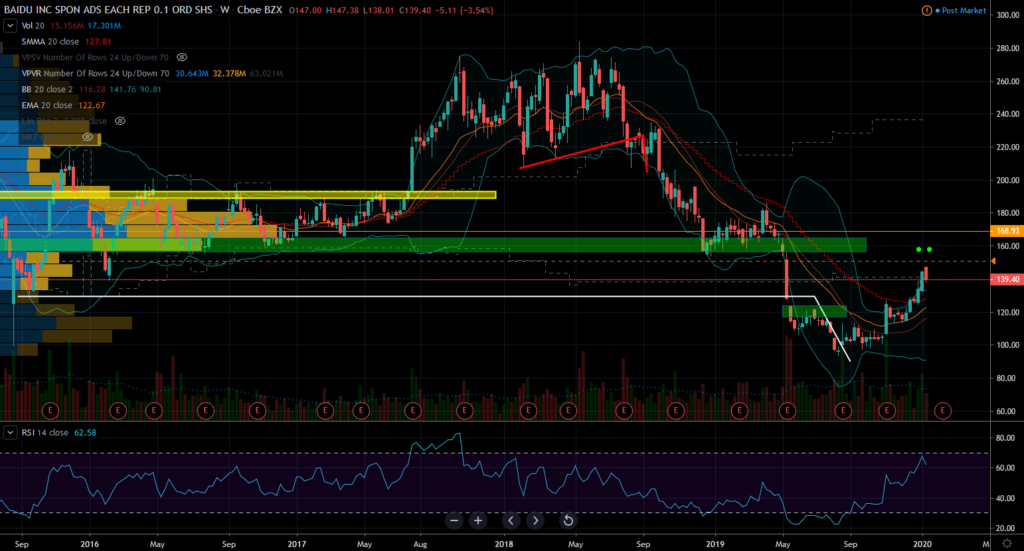 The slide for Baidu from the 2018 highs was horrendous. The stock fell almost 70% before it bottomed last August. Luckily for the bulls, the stock has already recovered quite a bit with a nice 55% rally. So the bulls are back in charge of the price action and normally that is a reason to buy or hold the shares.

From a trading perspective, however, this is not an obvious point of entry. The BIDU price action is coming back into a prior accident scene. The reaction from May 2019 earnings was violently negative and created a sharp ledge. This most recent rally brings the price back into that zone. And more often than not, those are resistance bands.

This is not to say that the rally is done forever, but it is a place to pause and wait for a pull back to establish better footing. Whether to buy Baidu now or later depends largely on the investor time frame. If the goal is to hold it for years then it’s no use trying to fish for the perfect entry point. Most of us would rather get out of the box with profits, not losses. Nevertheless, this is a good recovery and the most important part is that the buyers are back in charge right now. 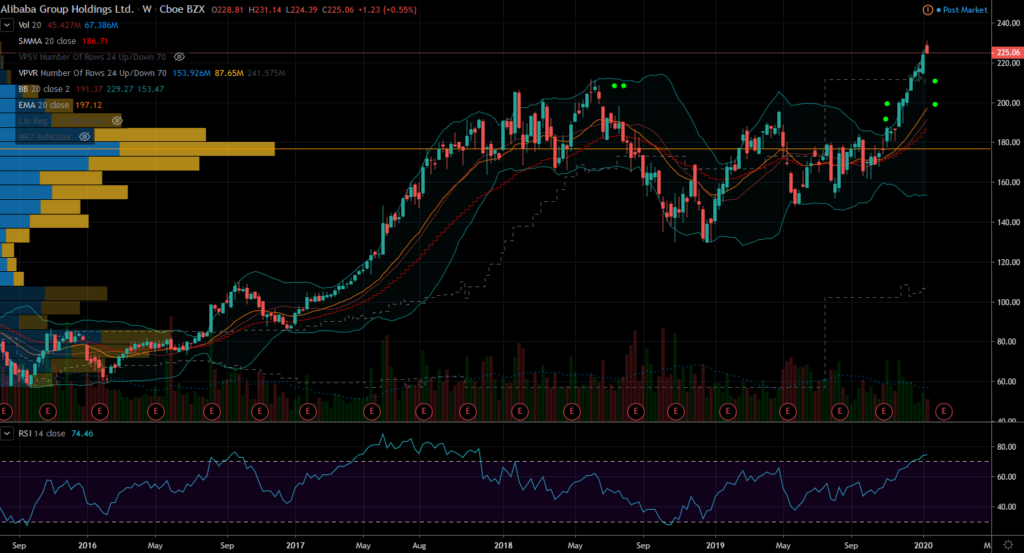 Unlike BIDU, Alibaba stock has already broken out into new highs. The launch happened once it crossed above $191 per share. Arguably it has already hit its measured move from the pattern. This is definitely not an obvious place to start a new bullish position in BABA stock.

The company is hitting on all cylinders so I am not bearish overall. But from a trading perspective, I bet there could be better entry points. Add to it that the stock markets are at all-time highs, then odds are that BABA pulls back a bit. This is not bad news. When a stock rallies this fast, it builds up a bunch of weak hands. Wall Street usually likes to shake a few of those off to establish better footing for more forward progress.

Having said that, this is not an invitation to short the stock, but rather to wait for a better entry point. Ideally an 8% correction could do the trick, but the downside could be a bit bigger than that given the slope of the rally that brought these new highs. 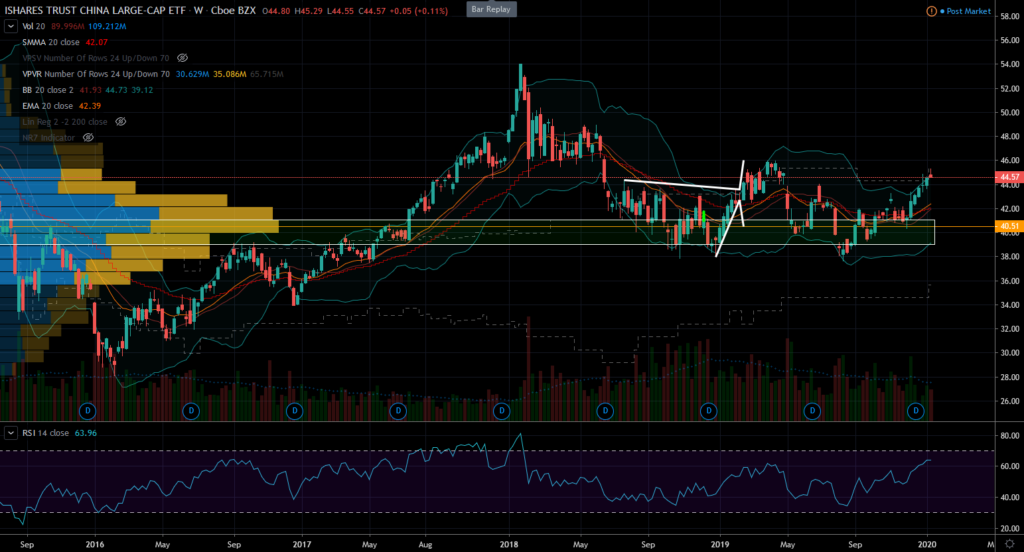 The improvement of the relationship between the U.S. and China unshackled Chinese stocks late last year. FXI bounced off critical levels in July of 2019 and since then has rallied almost 20%. The exciting part is that if the bulls are able to get above $46 per share, they could trigger another leg higher to retest $51 per share.

This is where patience comes in. The rally has been too fierce so far and it would be better to wait for the confirmation of the breakout above said neckline before chasing it if not already long FXI stock. Often when a stock rallies back into a prior failure point like what happened last April, markets like to fade it to gather better momentum to finally take it out.

Yesterday the U.S. and China signed the long-awaited deal, so the headline catalysts on that front will probably be sparse going forward. Investors need to know the levels and the proper time frames that fit their own portfolios. Luckily, there is a good base for FXI near $41 per share, so dips towards it will be buying opportunities for the bulls. However, in the event it falls below $38, it could spur another correction to retest the 2016 lows. This is not the forecast I have for it, but it is a possible scenario.