The equity markets have had a turbulent week, but in this case the outcome has so far been great for the bulls.

After scary headlines of actually military conflicts between the U.S. and Iran the S&P 500 and the Nasdaq Composite made new highs once again.

The three fintech stocks I’m going to discuss today were up big on Wednesday. Visa (NYSE:V) and MasterCard (NYSE:MA) were up 1.6% and Square (NYSE: SQ) up almost 5%. PayPal (NASDAQ:PYPL) is also flying high so it deserves an honorable mention too.

Clearly Wall Street is back in favor of financial technology stocks. For Visa and MasterCard this is nothing new as each stock has held near their highs for a while. But for Square it has been a struggle.

Going into 2020, this group is one to trade from the long side. Each has the bullish wind in their sails. And despite the doubters, the overall upside scenario still is more likely than the correction. We are going into an election season, so the incumbents will keep the good times rolling.

The Federal Reserve is obliging with an extremely dovish stance. They flipped on a dime at the end of 2018 and since then recommitted to it on several occasions. This is all to say that the bears need a miracle catalyst to break this trend. Not even actual bombs have slowed this market down for more than a few hours. With all of that in mind, let’s take a deeper dive into what makes each of these fintech stocks tick. 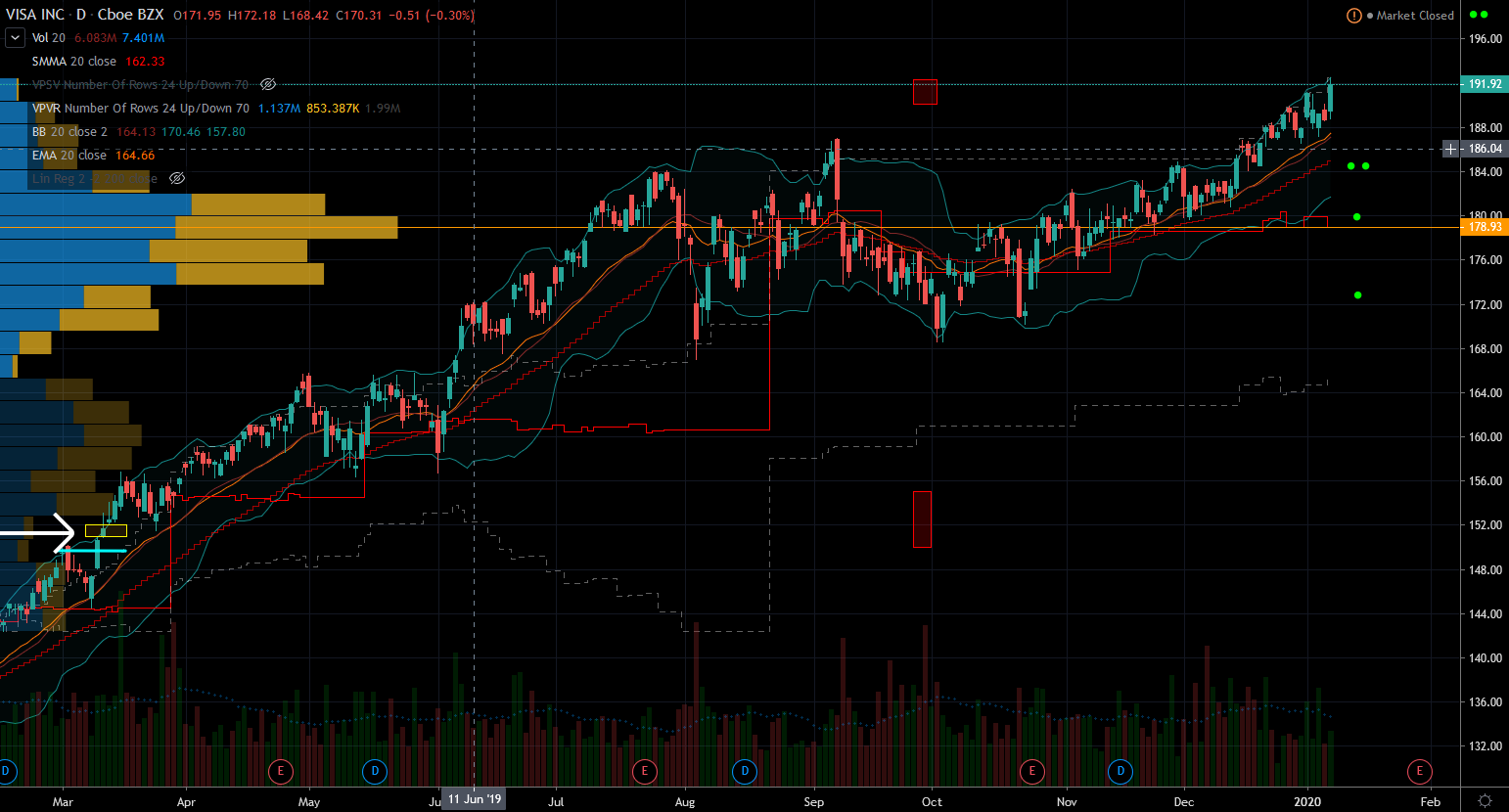 Visa stock is beating the S&P 500 by about 13 percentage points and this is likely to continue for a long while. Fintech stocks, especially the oldest ones like V and MA, rarely have problems specific to them. So if the equities are bullish, then V is leading the way.

So far this year, Visa has set new highs like this morning, so there is no evidence of slowing down. Those long the stock have no reason to leave it. The rest will be chasing it, but from what level? And therein lies the toughest decision: When is it too late to chase?

A good rule of thumb is to make sure that there is no imminent resistance zone. Visa just set a new all-time high, so there is no physical barrier in sight. It is literally off the charts. And it will rise for as long as sentiment on Wall Street remains positive. Therefore, it’s not too late to be long Visa stock here.

For those who are waiting for a dip, Visa has support at its closest pivot level near $184 per share. Below it, V has a ton of support through the next $15, so the bears will need to come up with really good reasons to break this beautiful trend. 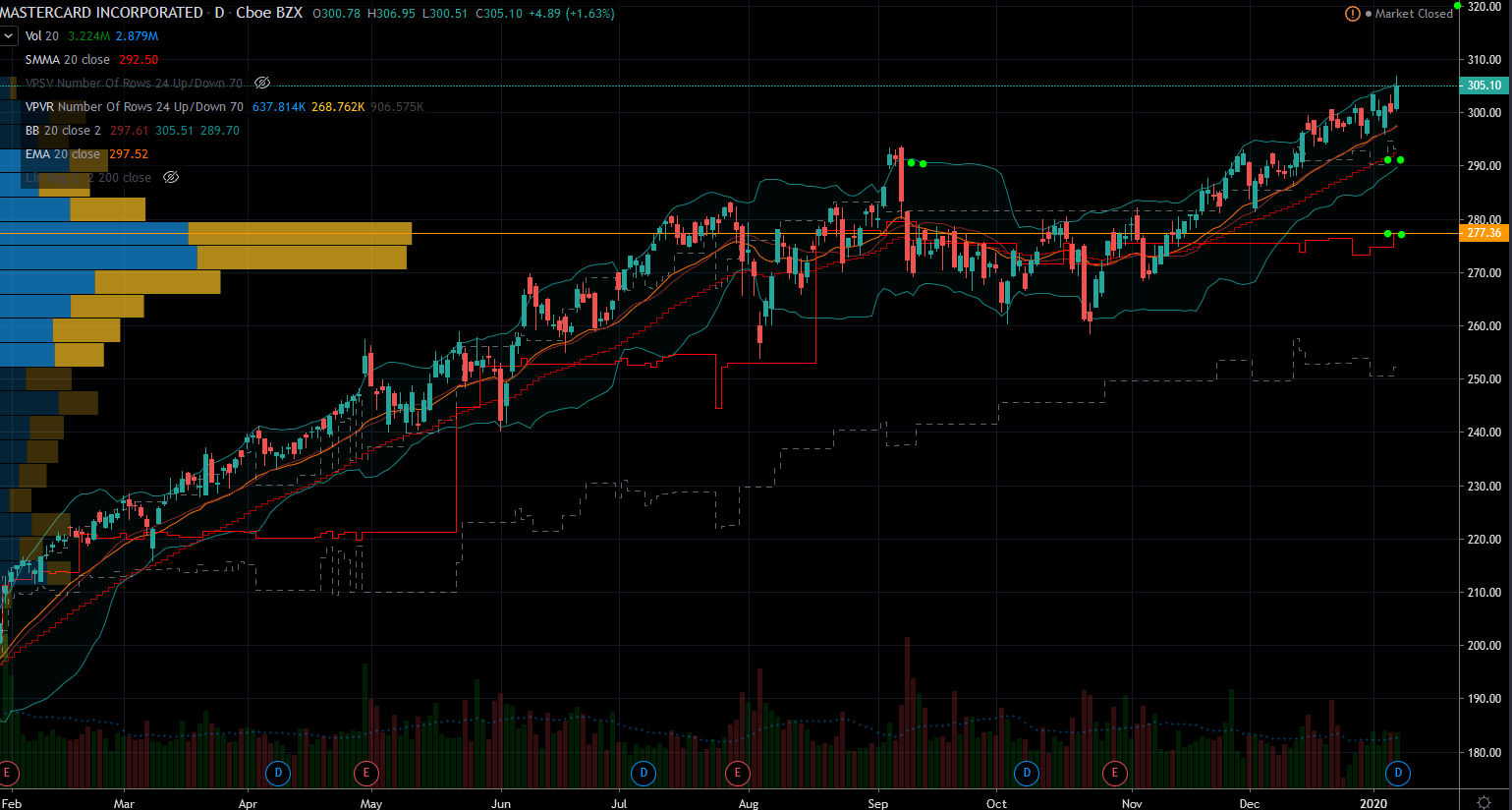 While Visa is doing great, MasterCard stock is the sector champ. MA is up 59% for the past 12 months, which is 40% better than Visa. Both are beating the S&P 500. So it is no surprise that MA stock keeps setting records. Investors have been buying every dip and that’s not likely to change soon.

So owning the shares at least until the summer is likely to yield upside. It might also be sane to wait for a mini dip, but I don’t expect MA to fall far below $290 per share. This was a marked turning point last September and again in December. So if it falls into it, there will be buyers there.

As they say, “the trend is your friend,” and this is a strong one. But in the unlikely event of a major correction, MA stock has strong support near $277 per share. This is the point of control for 12 months, so it is literally where buyers and sellers have traded it the most. That means if the price falls into it, both sides are sure to fight it out again, thereby creating support. 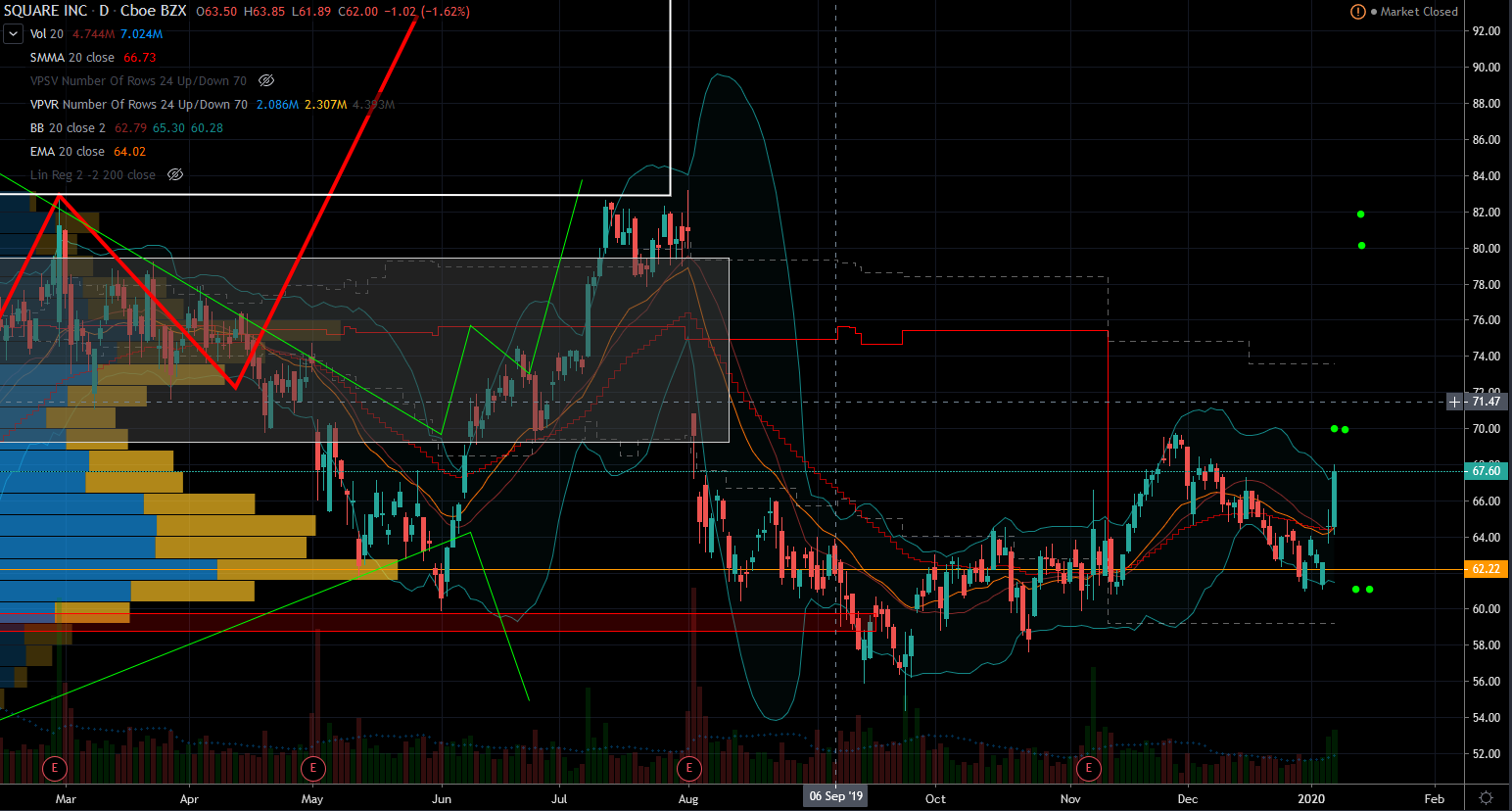 Square is a different story than the other two fintech stocks mentioned above. For a while it was a momentum stock that could do no wrong. This all changed after the October 2018 correction. The stock got cut in half and even though it recovered half of the loss by February 2019, it never was able to gain more.

The last two breakout potentials at $84 per share failed miserably, resulting each in a 28% correction in February and 30% in July. This week, SQ stock spiked almost 10% partly on an upgrade from BofA Merrill Lynch analyst Jeff Kupferberg. They said it was time for a catch-up trade to the rest of the sector. While I don’t disagree with the concept, SQ has disappointed a few times already, so this warrants a discussion over the timing.

After a 10% rally in mere hours, it’s never an obvious entry point. What happens at $70 per share is very important. The bounce off support is the easy work, but now SQ is coming into a prior failure level. There is likely to be resistance there. So the bulls have to earn it so they may fade from the first attempt. This would allow them to build a better base to breakout at subsequent attempts.

While this sounds bearish, it’s not. The basic idea is that it is important to wait for confirmation at the next trigger before chasing. A close above $70, or better yet $70.90, would invite buyers to target $82 per share. This would be the next significant test because it too was a massive failure ledge from the August earnings reaction.

This of course means that management needs to step up and deliver some good news. This co-CEO situation with Jack Dorsey splitting his efforts between SQ and Twitter (NYSE:TWTR) is getting more coverage. This is especially true after he recently announced that he wants to relocate to Africa. Investors didn’t love that idea, so the caveat is that there are no new surprises from the c-suite that could foil this technical rally.