The equity markets are showing extraordinary resilience, even when faced with the prospects of World War III.

The indices refuse to fall far from their all time highs.

Coming into the Monday session, the media was preparing coverage of a crisis.

Instead the markets went green and Wall Street is showing no fear. So there continue to be opportunities, especially among the big cap DOW stocks.

The volatility index is spiking but has so far failed to hold its gains. Furthermore, the actions on Wall Street suggest that there is no real fear yet.

Even on Monday morning when investors were supposed to be fretting the conflict with Iran, there were strong bids for frothy stocks. Scared markets do not buy speculative equities. They hunker down and run for safety like in bonds.

Under such bullish conditions, today we highlight three DOW stocks that are looking like they want to spike soon. All three are still facing major issues but there seems to be light at the end of the tunnel for each. Caterpillar (NYSE:CAT), Boeing (NYSE:BA) and International Business Machines (NYSE:IBM) are overcoming tremendous trepidation, so their stocks are near relief zones.

Dow Jones Stocks That Are Ready to Pop: Caterpillar (CAT) 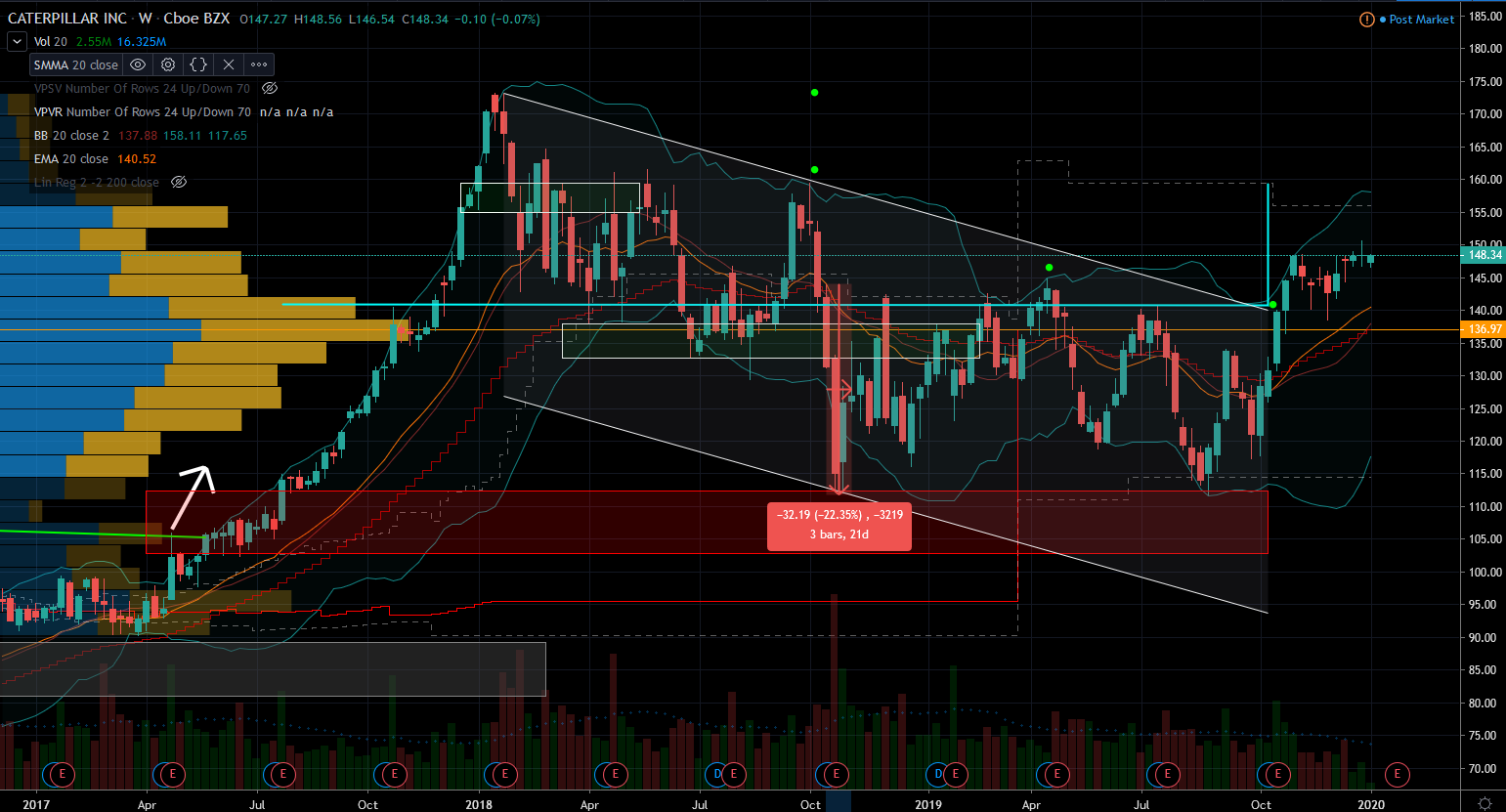 For the last two years it felt like Caterpillar stock had a curse against it. Every potential substantial rally failed. It didn’t help that CAT stock was in the direct line of fire from the economic war with China. Now that both sides are playing nice and seem intent on a deal, CAT’s bullish breakout setup has a real chance of materializing. This time it has a confluence of at least two technical reasons to spike. There is a breakout from a descending channel, and another from overcoming a prior failure level.

Since the October correction of 2018, CAT stock had stalled below $145 per share. Recently, the bulls were finally able to overcome it. Now they can use this neckline to build upon the momentum and recover the highs. If and when they get to $160, the bulls will face stiff resistance.

Earnings are coming soon so maybe management can give Wall Street a concrete reason to buy it up with vigor. But this is a knife that can cut both ways because we all still remember how a few words from the CFO can cause a 20% debacle in the stock chart. Maybe now management will deliver an upbeat outlook, especially if they no longer see hindrance from the Chinese economic war.

Unlike many frothy stocks that are rallying these days, CAT has value. So the move if and when it comes is justified. Fundamentally, Caterpillar stock is cheap. It sells at a modest 14 price-to-earnings ratio and 1.5 times sales. So owning it here is not likely to be a major financial debacle in the long term. Besides, from the charts, there is proven support through $127 per share. 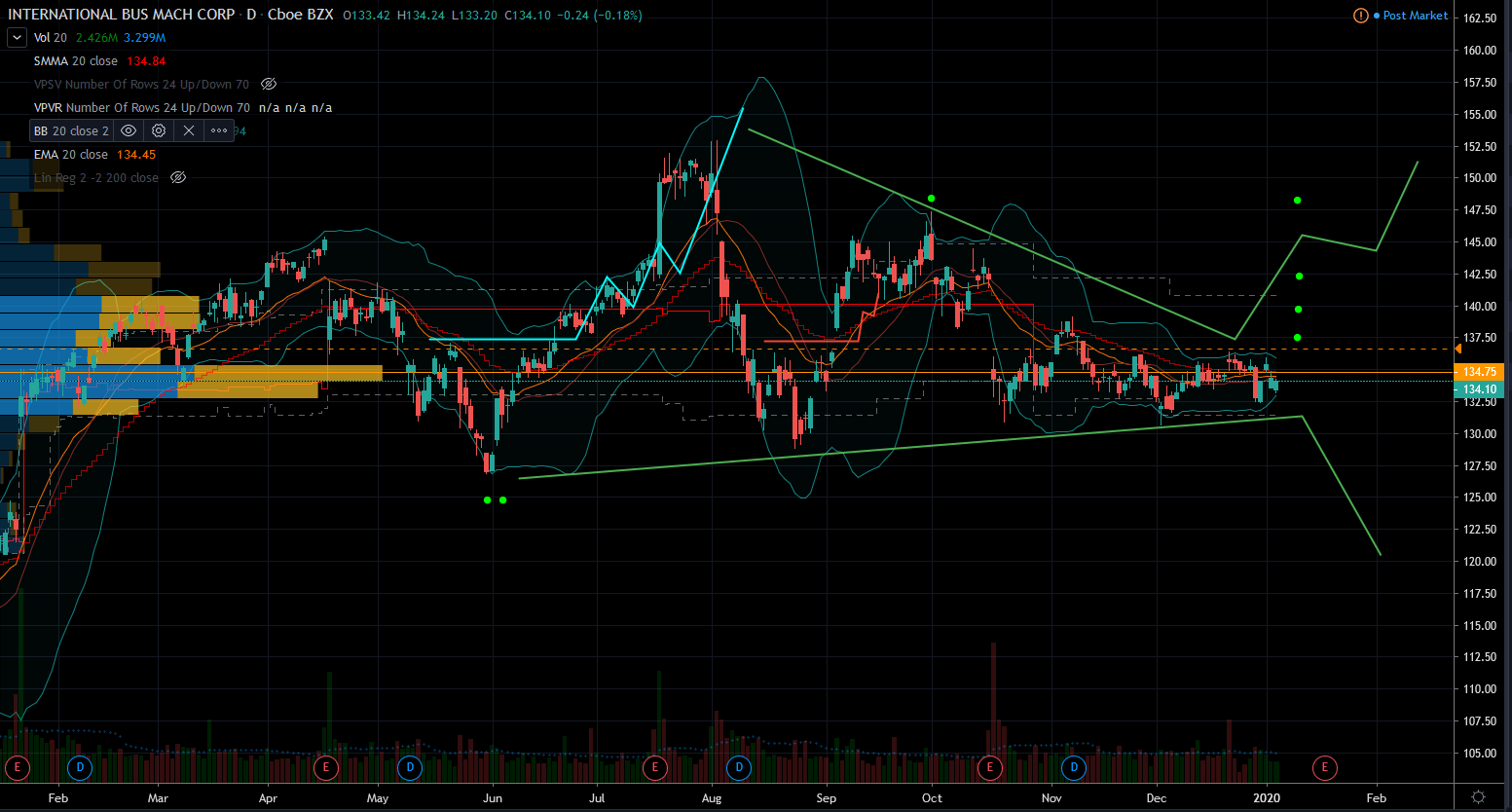 For years Wall Street has been expecting IBM to make the turn into the new tech world. For some reason they can’t seem to make it like say Microsoft (NASDAQ:MSFT) did. Nevertheless, management still gets a pass on the subject so for now we can trade the charts where the opportunity lies.

The IBM stock price range is tight. For the last year it has set higher-lows and lower-highs and now it is in a pinpoint jam. It has also consolidated for the last few weeks between $131 and $137 per share. So a breach of either sides of this is likely to have momentum in that direction.

Since the pattern of lower-highs has formed a deep wedge bumping up above a set of relatively flat base, the breakout to the upside is more likely than not. So the better bet is to take a position alongside the bulls in this first quarter. Earnings are coming soon, so it is up to management to not foil the setup. These events are binary in the short term, so there is that risk to consider. The last four reactions to earnings were two sharp rallies versus two sharp selloffs.

Long term, IBM is cheap in absolute terms. It has a 13 price-to-earnings ratio and it even pays a hefty 4.5% dividend yield. So maybe that is why investors are patient with the turnaround efforts. Even if the breakout fails, then the damage should be contained, especially if investor time frame is long. 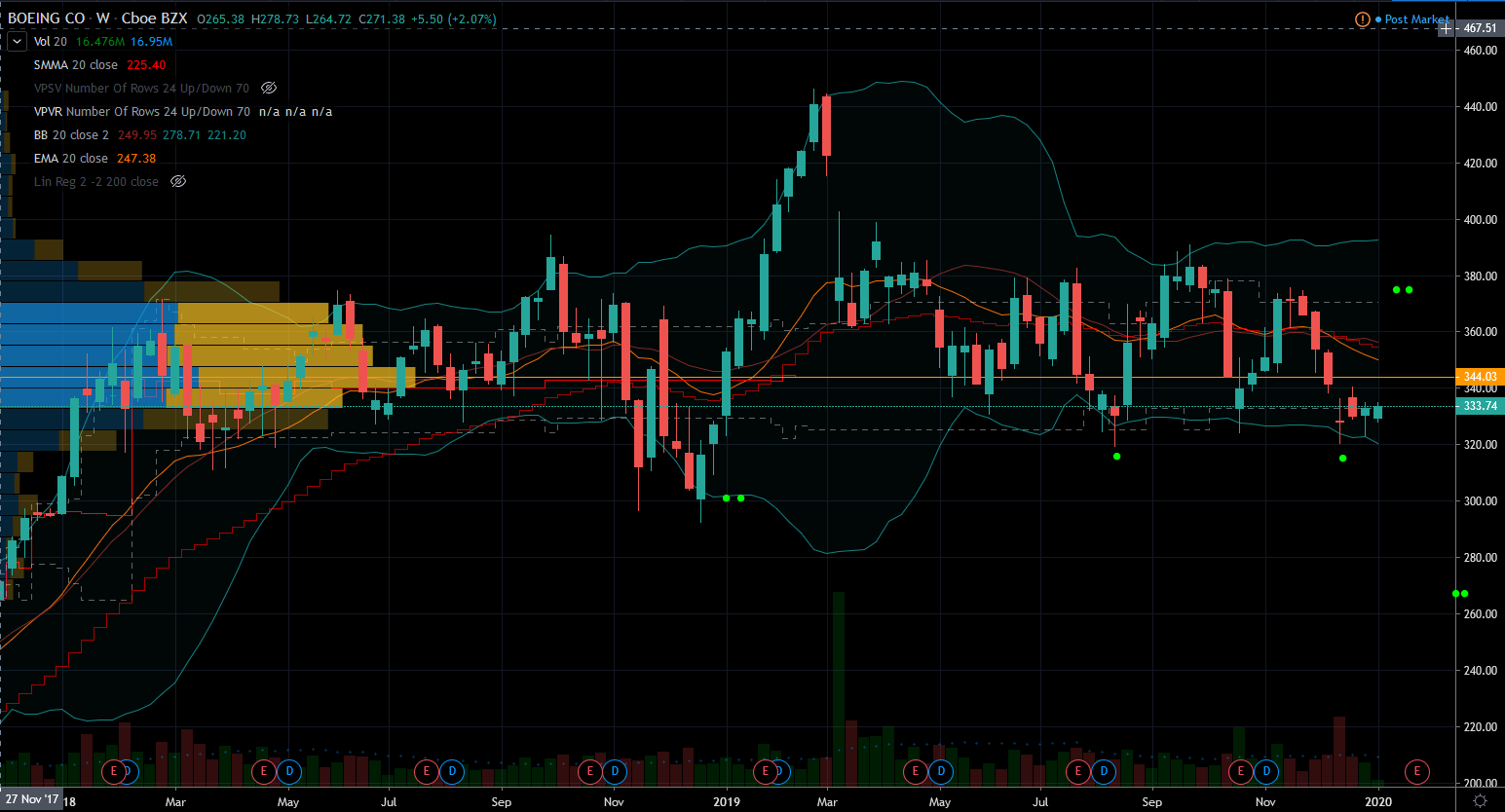 There is hardly a day that doesn’t bring bad news for Boeing stock. Just this week we learned of potential wiring issues with the 737 Max. Nevertheless, the stock is doing much better than it should given the negativity that surrounds it. This is perhaps because for years, BA stock had been a monster.

Investors liked its visibility as it had about a decade worth of backlog. So it is hard to bet against a company that is sold out for ten years, and it only has one other real competitor who is also fully booked. Meaning, the clients have no choice but to put up with BA and its delays.

The tragically sad accidents that the Max had may have changed the outlook a little. Even though BA stock is not a catastrophe yet, this time there is real risk of prolonged repercussions. The 737 Max is still grounded and in spite of BA’s own optimism, consensus is that it will be out of commission for a long while.

But today’s opportunity is based on the charts. Despite of all the trepidation that BA stock has had for months, it has proven support below $320 per share. It only broke below $300 during the horrendous market-wide correction two Christmases ago.

This is a bet I can make using options to generate income out of thin air. Buying BA shares requires a lot of hopium to profit until this whole mess is behind it. But meanwhile, selling the BA May $280 put brings a potential $6 in profit. The worst that could happen is that you own the shares with a breakeven point at $274. This is a 17% buffer from current price.

Compare this with risking $334 today per share without any room for error and hoping for a rally to profit. The upside scenario has about $40 to $50 worth of profits if BA stock is to repeat its see-saw price action inside this weekly consolidation zone.