After China indicated that it was willing to discuss tougher intellectual property protections, stocks were primed for a rally on Monday. This particular subject has been a sticking point in the negotiations and was the news from China was viewed as a bit of a concession.

All four indices moved higher for a second straight day with the Russell leading the way with a gain of 2.07%. The Nasdaq was the second best performer with a move of 1.32% and the S&P tacked on 0.75%. The Dow lagged the others but still moved up 0.68%.

[hana-code-insert name=’adsense-article’ /]Nine of the 10 main sectors moved higher on Monday with only the utilities sector losing ground.

Not surprisingly the tech sector led the way with a gain of 1.46%.

The healthcare sector jumped 1.17% and was the only other sector to gain more than 1.0%.

The barometer was able to move in to positive territory with a reading of 13.4, up from a reading of -15.5 on Friday.

With an abundance of stocks to choose from on the bullish list, it shouldn’t come as a surprise that today’s trade idea is a bullish one. The subject company might be a surprise though as it is Home Depot (NYSE: HD). The company made headlines when it issued a poor earnings report and fell sharply on November 19, but the company’s fundamental ratings are still really good. The EPS rating is at 81 and the SMR rating is still an A. 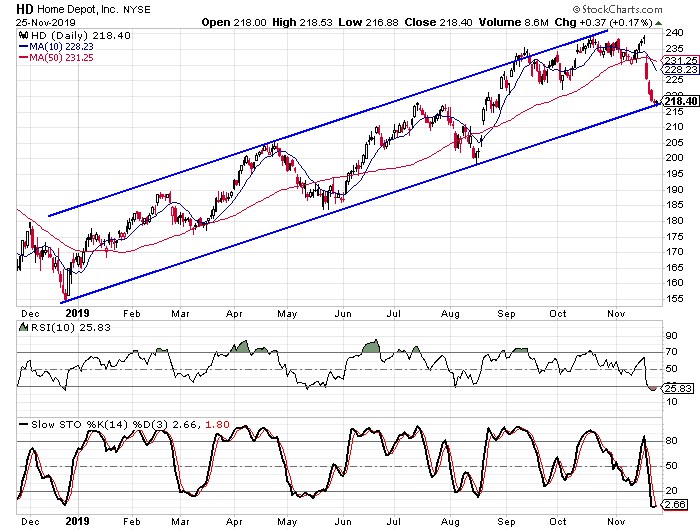 If we look at the daily chart we see that the stock has been trending higher since last December and the pullback has brought the stock down to the lower rail of its trend channel. The daily stochastic readings reached oversold territory and made a bullish crossover yesterday.