The overall market stormed higher out of the gate on Thursday and maintained the solid gains until late in the day when some selling hit. All four indices finished with gains, but they were well off their highs of the day.

The Dow led the way with a gain of 0.66% and that was considerably better than the other three. The Nasdaq and the Russell tied for the second best performance with identical gains of 0.28%. The S&P was a tick lower than those two and gained 0.27%.

[hana-code-insert name=’adsense-article’ /]Seven of the 10 main sectors moved up on Thursday with the energy sector being the hands down top performer with a gain of 1.50%.

Tech stocks finished with the second best performance by moving up 0.80%.

The utilities sector took the worst hit with a decline of 1.35%.

The consumer discretionary sector fell 0.60% and the consumer staples sector dropped 0.34% as the other two that finished with losses.

With so many stocks in overbought territory and with the dip late in the day, my scans turned decidedly more bearish with 106 names on the bearish list and 21 on the bullish side.

The barometer dropped to -50.3 from -22.8 once these results were added in to the equation.

With the overwhelming number of stocks and ETFs on the bearish list, it shouldn’t come as a big surprise that today’s trade idea is a bearish.  The Direxion Daily Energy Bull 3x Shares (NYSE: ERX) appeared on the bearish list along with a number of energy stocks as well as other energy ETFs. Obviously we don’t have fundamental ratings since it is a leveraged ETF, but the Tickeron Trend Prediction Engine generated a bearish signal on Wednesday and past predictions have been accurate 100% of the time. 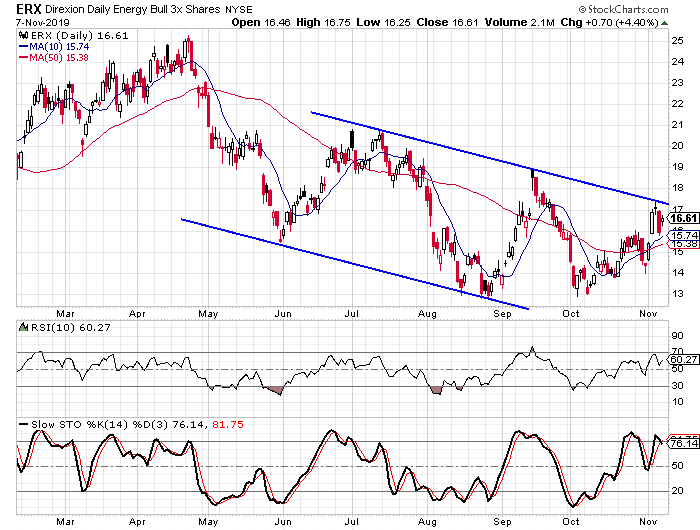 The ERX has been trending lower since April, but a trend channel has formed over the last four and a half months. The fund is right at the upper rail of the channel and the daily stochastic readings are in overbought territory and made a bearish crossover last night.