Stocks wavered back and forth a little on Wednesday with the indices not really moving too far away from the breakeven point at any point. There were some concerns about the trade talks and whether or not the first phase of the agreements will actually get signed. That sent the indices down toward midday, but they recovered most of the losses from that drop.

The Russell dropped 0.63% and that was the worst loss on the day and it was joined in the red by the Nasdaq which fell 0.29%. The S&P inched up 0.07% and the Dow was basically unchanged—it lost 0.07 points, points not percentage points.

[hana-code-insert name=’adsense-article’ /]Six of the 10 sectors moved higher on Wednesday with the financial sector leading the way with a gain of 0.51%.

The consumer staples sector moved up 0.41% as the second leading performer.

The energy sector got hit hard and fell 2.04% on the day.

Oil fell over 1% on the day and didn’t help the sector.

The communication services sector declined 0.35% and that was the second worst performance on the day.

The barometer dropped from -8.7 to -22.8 once these results were added in to the equation.

After a couple of bearish trade ideas in a row, I have a bullish trade idea for you today.  Wendy’s (Nasdaq: WEN) appeared on the bullish list last night and the company reported earnings yesterday morning. It beat its EPS estimate, revenue estimate, and raised its guidance. The company scores a 95 on the EPS rating and an A on the SMR score. 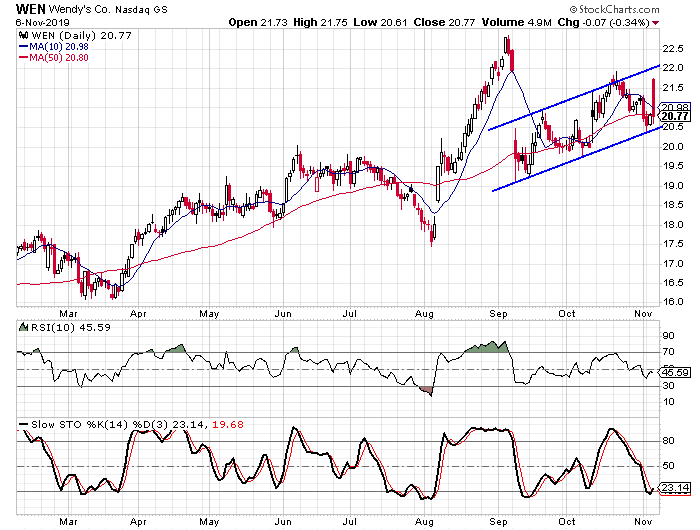 Wendy’s has been trending higher since March and a trend channel has formed over the last few months. The stock hit the lower rail of the channel earlier this week and bounced a little. We also see that the stochastic readings were in oversold territory and made a bullish crossover last night.