Are you worried the stock market has topped out? Mega-capitalization stocks like Microsoft (NASDAQ:MSFT), Chevron (NYSE:CVX) and Alphabet (NASDAQ:GOOG, NASDAQ:GOOGL) are saying otherwise. And they have become promising stocks to buy noe.

It has been a positive couple days for the broad-based large-capitalization S&P 500. Following last week’s hard-fought gain of 1.51% and fresh all-time-highs, the index has eked out an additional 0.25% and one more high-water mark for the record books. But Tuesday felt and looked a bit different.

[hana-code-insert name=’adsense-article’ /]Despite news China and the U.S. are considering rolling back tariffs on top of the two countries’ initial trade deal, some technical and mental fatigue from bulls was evident in Tuesday’s modest 0.12% decline.

But that doesn’t mean there aren’t good stocks to buy anymore.

A pullback with a convenient but ineffectual headline lightens the likelihood of over-the-top profit taking in the market.

And the S&P 500 deserves a technical pause, as does a stock like Apple (NASDAQ:AAPL), which is up a technically stretched 12% over the past month at record highs.

But to be clear, the trend is your friend.

And in today’s bull market, as we move through the seasonally strong holiday period, there are still other technically strong and sound mega-cap stocks to buy. 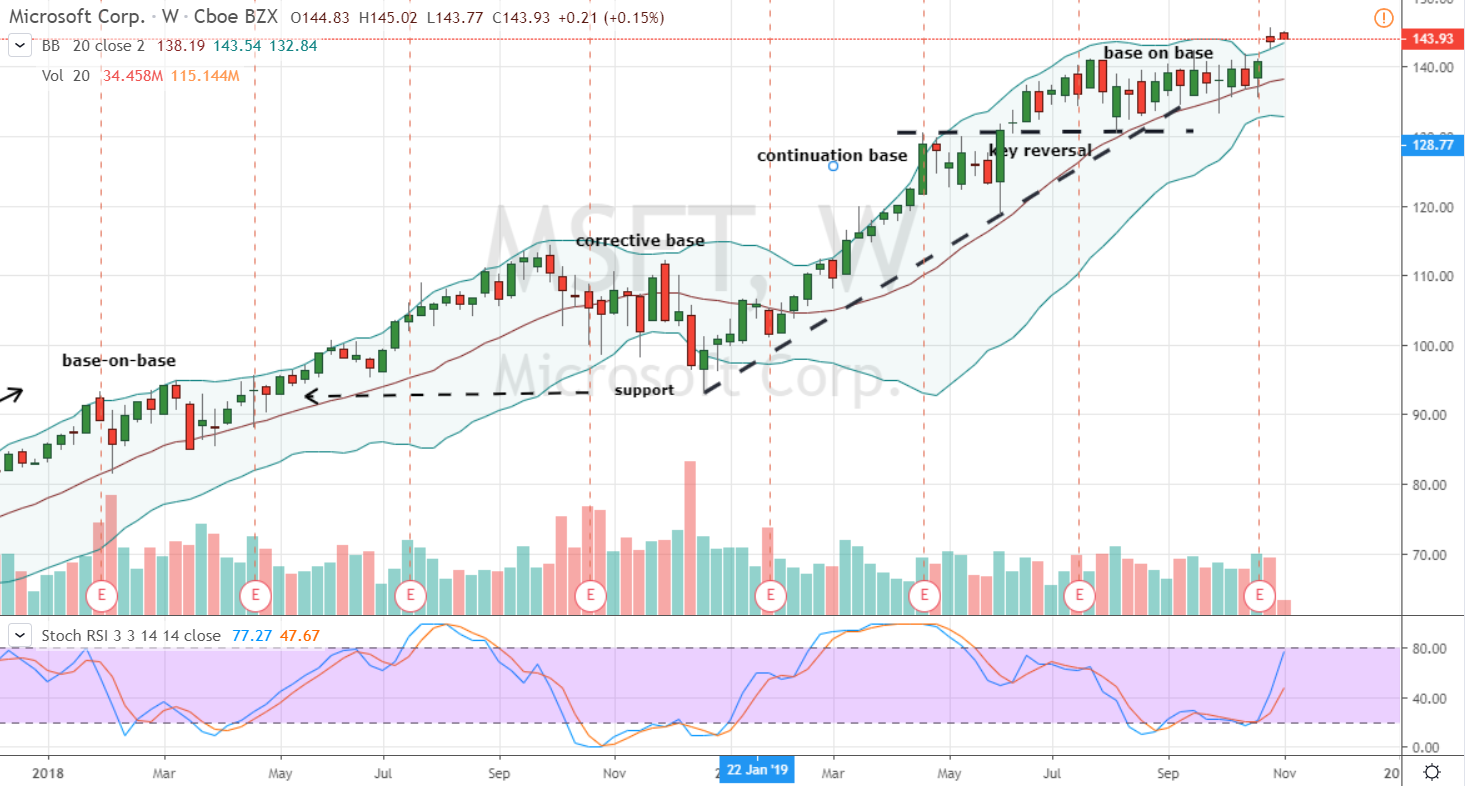 Microsoft is the first of our large-cap stocks to buy. Shares are up about 4% and mostly on-par with the S&P 500 over the past weeks with an earnings topper and an important $10 billion Azure cloud contract with the Pentagon acting as primary drivers. But technically, MSFT stock has room to run further right now.

The gains of the past few weeks have taken MSFT stock roughly 2% above a classic breakout of a very constructive-looking four month flat base. Conservatively, a rally of 10% to 20% from the pattern is expected. And with stochastics still lending support and plenty of upside in relation to the risk, MSFT is a stock to buy today.

MSFT Stock Strategy: Buy MSFT stock and look to take initial profits in-between $155 – $160. To minimize downside exposure, setting a stop-loss below $137 keeps this a smart-looking risk-adjusted stock to buy off and on the price chart. 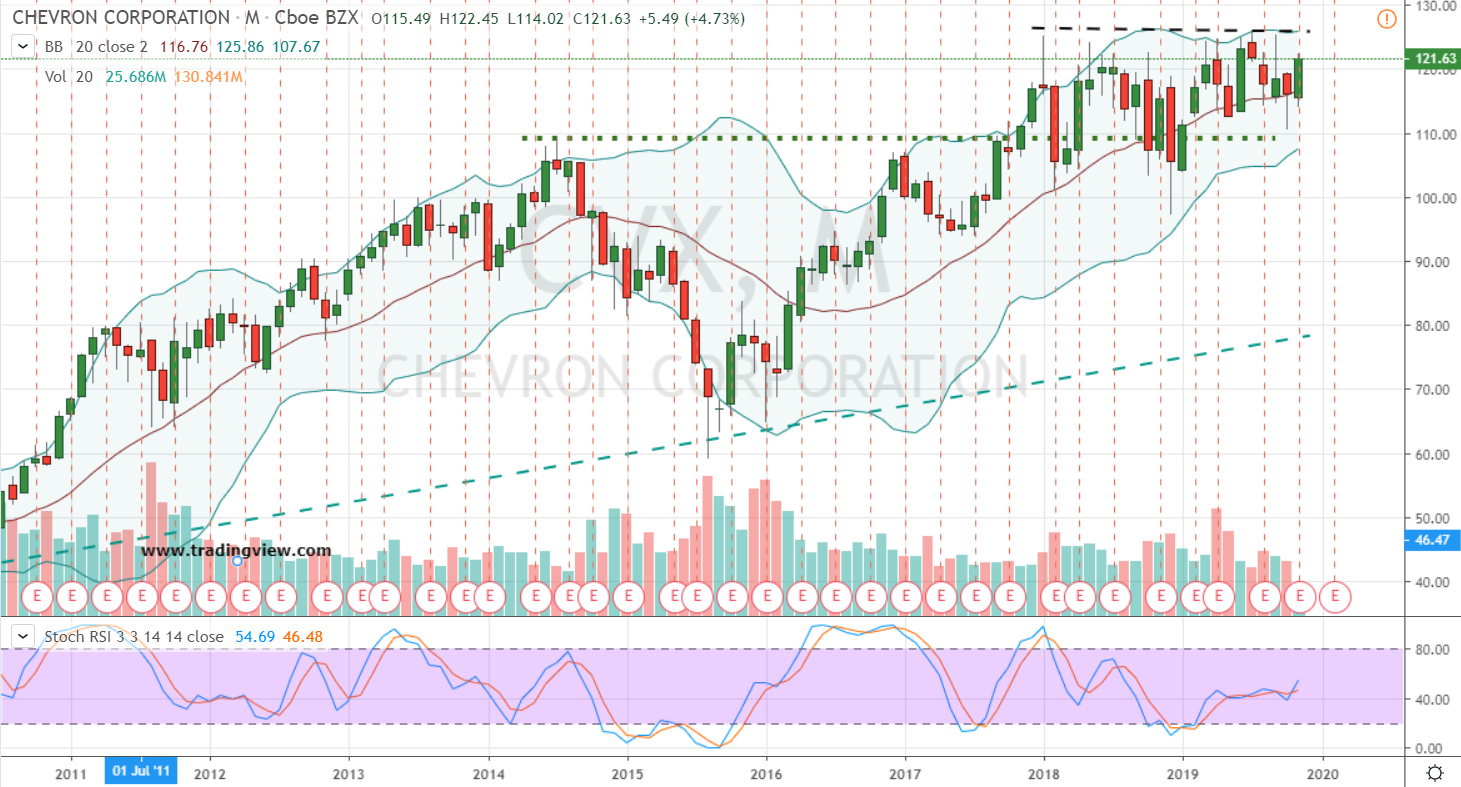 Chevron shares are up over 4% in November alone. But don’t think for a second CVX stock is overbought and in need of a pullback like the market. Aside from being down 2% in October, the monthly chart is technical proof of a stock that has put in the time to produce market-leading gains going forward.

For nearly two years, CVX stock has established a “mostly” lateral base that has “largely” held support tied to its prior all-time-high from 2014. And with November’s bid confirming October’s bullish hammer candlestick and stochastics bullishly resetting, this is a stock to buy now.

CVX Stock Strategy: The recommendation for CVX stock is to buy shares today and get a head start on an imminent base breakout. I’d set a price target of $150 as a spot to take initial profits. And to contain downside risk, placing a stop below $113.40 is sufficient leeway inside the October hammer and off the price chart with risk of about 6.75%. 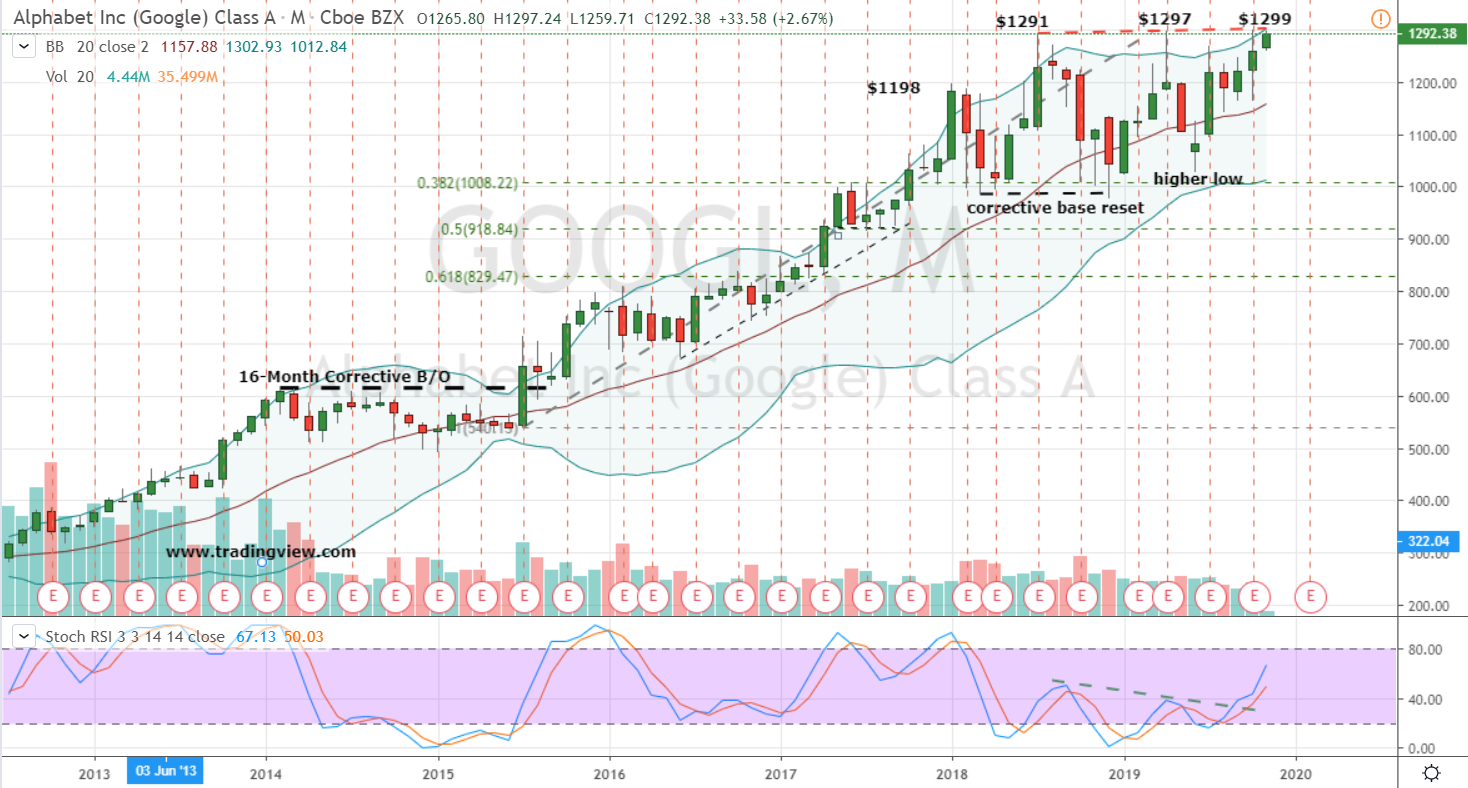 A recent headline earnings miss was good for some modest profit-taking in Alphabet, but don’t be fooled. Beneath the surface, GOOGL stock put up decent sales and paid clicks numbers.

What’s also appealing is while others such as Goldman Sachs continue to warn antitrust problems are growing for GOOGL and peers Amazon (NASDAQ:AMZN) and Facebook (NASDAQ:FB), shares of Alphabet are on the verge of breaking through a 15-month long base. Bears can find solace for the time being in a monthly chart triple top. But with stochastics making a cut and dry case for bulls, I’ll say it again, don’t be fooled. Alphabet is a stock to buy.

GOOGL Stock Strategy: Buy GOOGL stock modestly above pattern and whole number resistance on a move through $1,313. Given a base depth of more than $300, I’d look to take initial future profits at $1,500. In the event a buy signal in shares begins to falter, an exit beneath $1,233 is enough exposure to maintain a smarter risk-adjusted position.