Eight of the 10 main sectors moved higher on the day with the energy sector leading the way with a gain of 1.81%. The sector got a boost from positive earnings results from Halliburton.

[hana-code-insert name=’adsense-article’ /]The financial sector finished with the second best gain at 1.39% and the tech sector gained 1.05% to give us three sectors with moves over 1.0%.

On the down side, the materials sector finished with the worst return at -0.30%.

The healthcare sector was hit with some bad news over the opioid crisis as four companies reached a settlement with specific counties in Ohio and that led to a loss of 0.09% for the sector.

My scans remained negative, but they weren’t as bearishly skewed as Friday’s results.

A number of the stocks and ETFs on the bearish list were from the healthcare sector. The SPDR S&P Biotech ETF (NYSE: XBI) was one of the ETFs on the list and the chart was intriguing. There was also a bearish signal from the Tickeron Trend Prediction Engine. Past predictions from the AI tool have been successful 95% of the time. 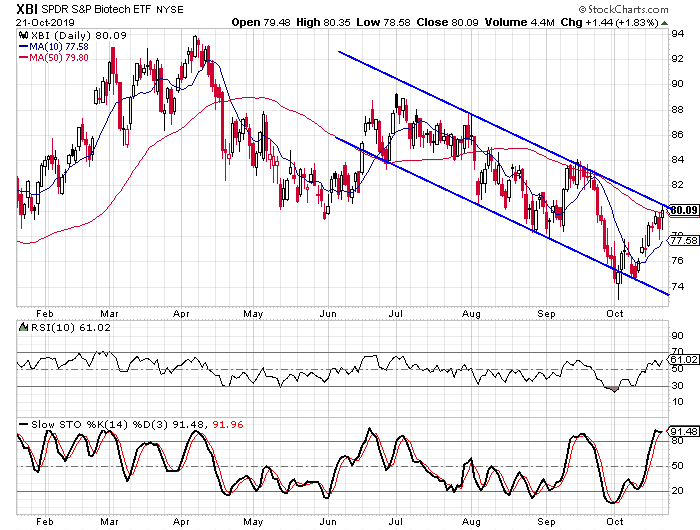 The daily chart shows a rather clean downwardly sloped trend channel with the XBI right at the upper rail. The daily stochastic readings are in overbought territory and made a bearish crossover last night and that is the same setup we had in mid September before the fund fell over 13%.

Buy to open the December 82-strike puts on XBI at $4.10 or better. These options expire on December 20. In order for these options to double the fund will need to drop to $73.80. The lower rail of the channel is right at that price level currently, but will be considerably lower in the next few days. I suggest a target gain of 100% with a stop at $81.50.