Stocks extended Wednesday’s rally in to Thursday as there seemed to be more progress in the trade talks. Several comments were made by each side that encouraged investors in to thinking a deal could be reached in the near future.

The main indices all moved higher and essentially made up the rest of the losses from Tuesday. The S&P led the way with a gain of 0.64% and the Nasdaq followed with a gain of 0.60%. The Dow moved up 0.57% and the Russell tacked on 0.57%.

[hana-code-insert name=’adsense-article’ /]Nine of the 10 main sectors moved higher on Thursday with the utilities sector being the lone one that lost ground.

The energy sector was the top performer with a gain of 1.29% and the financial sector moved up 1.04%.

Those were the only two sectors that gained over 1.0% on the day.

My scans flipped the script last night and we had a positive reading after two straight negative readings.

There were 17 names on the bullish list and four on the bearish side.

The barometer continued to fall from the 100 reading last Friday. The final reading last night was 4.5, down from 17.7.

After a couple of bearish trade ideas in a row, I have a bullish idea for you today. The company is Trinity Industries (NYSE: TRN) and its fundamentals ratings show an EPS rating of 65 and an SMR rating of a C. These are only slightly above average and average, but it was the chart that really stood out. 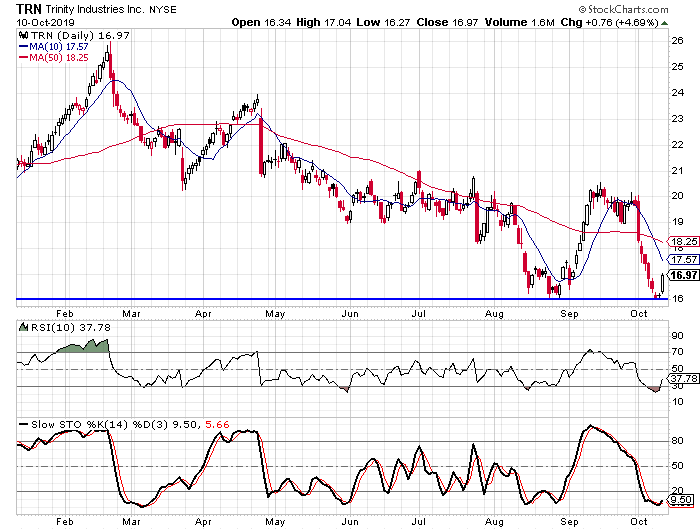 We see that the stock has dropped down to the $16 area for the second time in the last few months, but the area seems to be acting as support again. The stock bounced from $16 in late August to the $20 level in mid-September. I am looking for another move like that to complete the double-bottom pattern.

Buy to open the November 16-strike calls on TRN at $1.55 or better. These options expire on November 15. In order for these options to double the stock will need to reach $19.10. The high from September was much higher. I suggest a target gain of 100% with a stop at $15.90.