American Airlines (NASDAQ:AAL) has certainly encountered some turbulence lately. AAL stock had dropped over 30% from the July 25 highs near $35 before finally finding some footing. Higher fuel costs, a slowing economy and the ongoing Boeing 737 MAX saga all weighed heavily on American Airlines stock.

The selling has gotten overdone, however. Look for an undervalued and oversold AAL to propel higher and begin to ascend.

AAL undoubtedly took a hit with the grounding of the Boeing 737 Max.

Nearly 150 flights a day have been cancelled.

The company expects that the 737 MAX airplane will be recertified this year.

This should remove a big overhang in the stock price and be a catalyst for a rally.

The recent drop in oil should also be beneficial as well.

The fundamentals are looking comparatively attractive at current levels.

The trailing price-to-earnings ratio is only 7.8, well below the five-year average of 9.1. It is also at a large discount to the industry average of 10.8. American Airlines’ P/E is at a massive discount to the S&P 500 multiple of over 20. Price/sales stands at just 0.3 while price/cash flow is under 4. All of these metrics are nearing ten-year lows. AAL stock is decidedly cheap on both an actual and comparative basis. 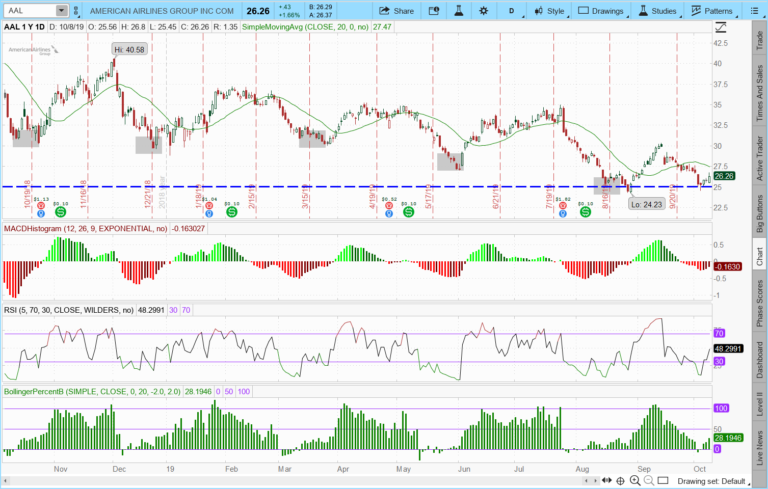 American Airlines stock is also attractive on a technical basis. The five-day relative strength index reached deeply oversold readings below 20 before strengthening. Moving average convergence/divergence reached a recent low then turned higher. Bollinger Band Percent B went negative but is now back in positive territory. There is solid horizontal support at the $25 level. AAL stock is trading at a discount to the 20-day moving average which has resulted in a rally back to that average in the past.

The prior five instances when these metrics aligned in a similar fashion marked a significant low in American Airlines stock. I expect that this time will be no different — and AAL will continue to head higher over the coming weeks.

AAL options have seen some unusual options activity over the past few trading sessions. Nearly 15,000 contracts of the Nov $25 calls have traded over the past three days versus just 1,653 open interest. These 15,000 contracts potentially represent a commitment of 1.5 million shares of American Airlines stock. The cost of the trade equates to a roughly $3 million outlay to purchase these options. Some big-time player is likely positioning for a big time pop in AAL stock.

How to Trade American Airlines
Stock traders and income investors should consider adding American Airlines to the portfolio on any weakness. The dividend yield is now at 1.52%, only slightly below the 10-year Treasury yield of 1.54%. The payout ratio is only 9%, meaning the dividend is very safe. Selling a Jan $28 covered call for $1.40 would boost the potential return by 5.3% (20.7% annualized) while still allowing for some upside appreciation.

The unusual call buying has driven up implied volatility, making option prices comparatively more expensive. This favors including some option selling when constructing trades. Option players who want to follow along with the call buying may want to consider going long the Nov $25/$27 call spread for $1.10. Maximum risk on the trade is $110 per spread. Maximum gain is $90 per spread if AAL stock closes above $27 at November expiration. Potential return on risk is 81%.

Earnings are due Oct. 24 with expectations for $1.33 in earnings per share on roughly $12 billion in revenue. An initial upside price target is a move back towards the recent highs at the $30 area. A meaningful break of support at $25 would be a viable stop out level.