Stocks got hit hard on Tuesday as the trade war rhetoric heated up once again. All four indices fell and they all dropped more than 1.0%. The Russell took the worst loss at 1.68% and it was followed closely by the Nasdaq which lost 1.67%. The S&P dropped 1.56% and the Dow took the smallest loss at 1.19%.

All 1o main sectors declined on the day with only two sectors keeping the loss below 1.0%. The utilities sector fell 0.93% and the consumer staples sector fell 0.95% and those were the top two performers.

The financial sector took the biggest loss at 1.98% while healthcare fell 1.9% as the second worst performer.

My scans saw big drop in signals from the bullish side and a slight increase on the bearish side.

The barometer dropped sharply from 89.4 to 53.9 once these results were added in.

Today’s trade idea is a bearish one and it is on a stock that I have suggested puts on before—Philip Morris International (NYSE: PM).

The stock gets an EPS rating of 68, but it doesn’t show an SMR rating at this time. The reason for that is that the company doesn’t have calculable return on equity at this time. Looking at the other components of the SMR, sales fell 5% during the second quarter and have only grown by 3% per year over the last three years. The profit margin is average at 13.8%. 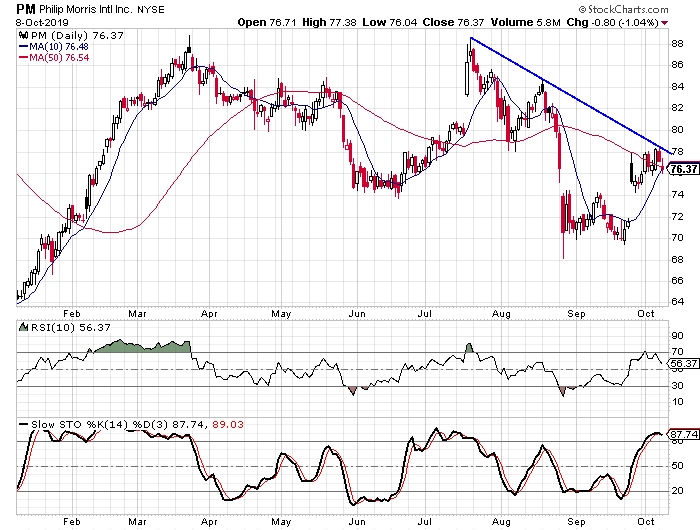 Philip Morris beat earnings back in July and jumped as a result. The stock has been trending lower since then and if you connect the high from that day with the August high, you get a downward sloped trend line and the stock just hit it on Monday. The stock is overbought and the stochastic readings made a bearish crossover last night.

This Stock Could Double in 3 Years (And Possibly Even Faster)

These 3 Stocks Have Bottomed and Are Now Attractive Buys

This Stock is Poised for a Surge in the Near-Term

This Trade Could Double Your Money in Less Than Two Months

Upgrades and Downgrades for Friday, 1/24

This Stock Could Triple From Here