Monday was a bit of a roller coaster for the indices with all four opening lower, moving in to positive territory before lunch, and then falling again in to the close. The moves weren’t huge, so maybe it was a kid-sized roller coaster. The moves seemed to be inspired more by news about trade than anything else.

All four of the main indices did end up finishing in the red for the day with the S&P taking the biggest loss at 0.45%. The Dow fell 0.36% and the Nasdaq declined 0.33%. The Russell suffered the smallest loss at 0.14%.

All 10 main sectors fell on Monday.

The biggest drop came from the energy sector with a drop of 0.94%.

Consumer staples took the second biggest loss at 0.83% and all other losses were contained to 0.50% or less.

The smallest loss was the communication services sector with a decline of only 0.06%.

My scans were produced some rather odd results on Monday.

There were 45 names on the bullish side and in terms of the barometer calculation, and there weren’t any bearish names on the list.

There were 16 ETFs that showed up on the bearish scan, but 14 were bond ETFs and two were inverse oil ETFs. As for the calculation of the barometer, I don’t count bond related ETFs on either side. For inverse ETFs, those actually count in the bullish count.

Even thought the scan results were completely lopsided again, the barometer actually fell from 100 to 89.4 as the huge reading from Friday lost some of its weighting.

As for today’s trade idea, it is for one of those ETFs that appeared on the bearish list and it is one of the inverse oil ETFs. When I looked at the chart for the ProShares UltraShort Bloomberg Crude Oil ETF (NYSE: SCO) I wanted to trade it. I even considered its bullish counterpart, but the chart wasn’t a mirror image of the chart for SCO, so I decided I would stick with what I saw. 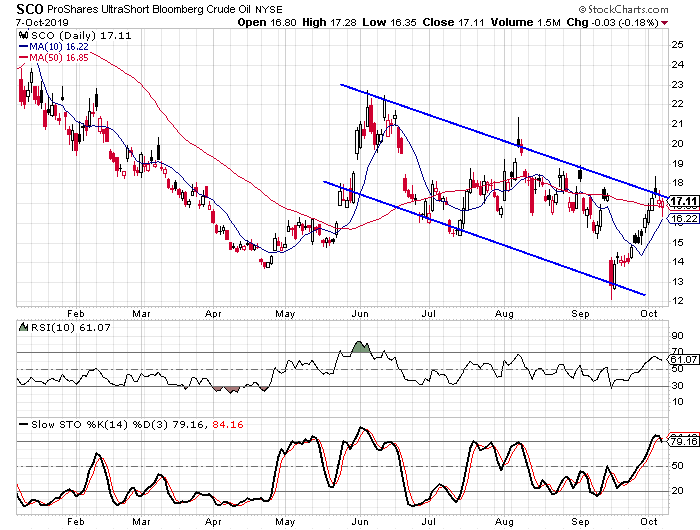 The daily chart shows how the SCO has been trending lower and a trend channel has formed to define the cycles within the overall trend. What is odd about playing puts on an inverse ETF is that we actually want oil to move up in order for the SCO to move down. With all of the tensions in the Middle East currently, another move to the upside for oil certainly feels like a possibility.

3 Stocks to Sell as the Coronavirus Smashes the Market

3 Growth Stocks to Benefit from the New Space Force

This Trade Targets a 100% Return in Seven Weeks

This Stock is Cheap and Has Big Upside Potential