Stocks got a boost from the European Central Bank on Thursday as the entity cut rates and introduced another round of quantitative easing. This kicks off a week where a number of central banks around the world will be making rate decisions, including the Fed next week.

Eight of the 10 sectors moved higher on the day with the materials sector leading the way with a gain of 0.78%.

The financial sector finished with the second best performance by moving up 0.57%.

The energy sector suffered the biggest loss at 0.57%.

Oil fell significantly for a second straight day and that led the sector down.

The healthcare sector dropped 0.03% and was the only other sector to lose ground.

My scans moved to a more negative skew last night with 92 names on the bearish list and 24 on the bullish list.

The barometer dropped from -34.4 to -49.2 once these figures were added in to the equation.

Even though there were far more stocks and ETFs on the bearish list, the one chart that jumped out at me was on the SPDR Gold Shares (NYSE: GLD). While the chart was what got my attention, there are fundamental factors at work with gold as well. With the majority of central banks looking to cut rates, that should help move gold higher. 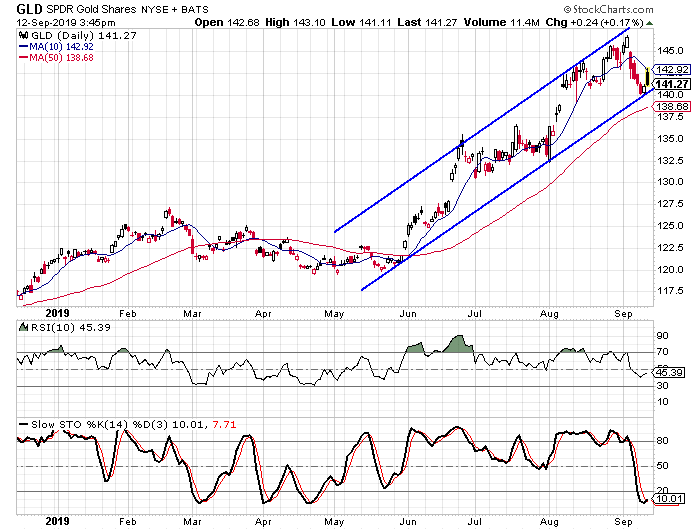 The GLD has been moving sharply higher since the end of May and a trend channel has formed that defines the cycles within the overall trend. The fund just hit the lower rail of the channel and bounced while the daily stochastic readings made a bullish crossover.

Buy to open the November 140-strike calls on GLD at $4.15 or better. These options expire on November 15. In order for these options to double the fund will need to reach $148.30. That will exceed the most recent high, but the upper rail should be up to that level in a few weeks. I suggest a target gain of 100% with a stop at $140.00.