For the last few days the stock markets have been healthy. Sentiment has taken a turn to positive and it’s like nothing bad is ever going to happen again. Just yesterday the indices rallied through incredible levels especially in small cap stocks. So there’s no doubt that there are stocks to buy here.

These are fallen angels stocks because they have recently corrected off of their highs just when they looked like their rallies would never end.

The time frames differ among them, but the concept remains the same.

They were headed to the moon, then they tripped.

So now the opportunity is to pick the right level to buy these stocks.

All three management teams are impeccable and they rarely falter on their own. So the bullish thesis for all three AMZN, MSFT and V assumes that markets in general are not going to crash any time soon. 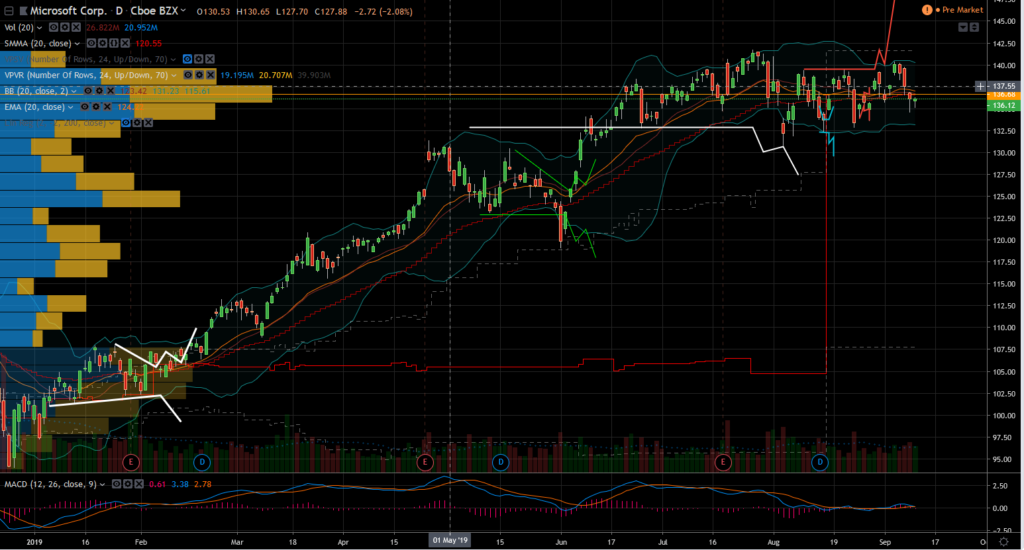 It’s hard to call MSFT stock a fallen angel stock because it’s still up 34% year-to-date and it’s only 5% off of the highs. Nevertheless, it has had a tough time in the last trading week, and what makes it interesting is that it did this while the equity markets were rallying hard.

Normally, this raises an alarm and causes me to look into weaknesses which would bring sustained selling. But that’s not the case here. This is a proven company who is merely having a normal price action give-and-take inside a very healthy ascending trend.

Fundamentally MSFT is not cheap since it sells at 29 trailing price-to-earnings ratio and 8 times sales. But this is a company that deserves the benefit of the doubt so it is possible that they deliver strong growth to justify the higher valuations.

This is all to say that Microsoft stock is not cheap but it still is a good one to own for the long term. So these dips are normal and should not cause a panic out of the stock.

Technically, the zone around $130 per share is pivotal for MSFT stock. This was resistance in April, then a break out in June, and then a successful test for support in early August when markets fell in fear of the 10% additional tariffs tweet. So clearly the bulls earned the right to use it that support.

Knowing this, makes it possible for the buy-programs to prevail over the bears in the battle over MSFT for as long as the equity markets are healthy. If I own shares, I don’t panic out of them on these dips. Moreover, if I want to own some for the future then this is as good a time as any to start a position there.

Alternatively I can use options to sell puts or spreads below said support to generate income without needing rallies. For this, it is important to note that if stocks correct this year from geopolitical risk, then Microsoft stock is vulnerable to a 12% correction. 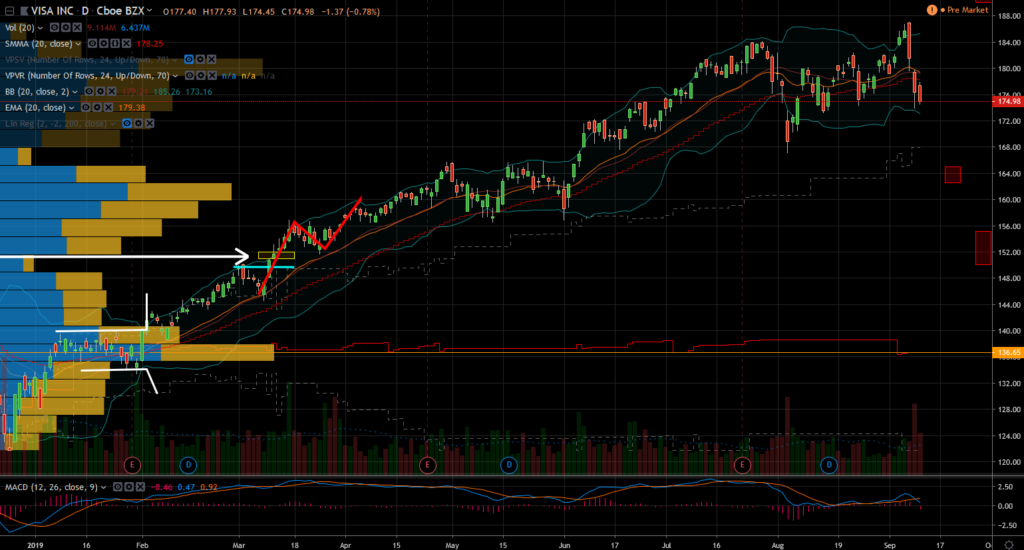 V stock is in a similar situation to that of Microsoft. It’s a proven winner that was seemingly rallying to the moon without interruption. But then in the last few days, it fell 6% while the general markets are up big.

Here too, the drop is not a reflection on Visa itself but rather part of normal price action. For the longest time credit card stocks with a presence in the fintech space like Visa and MasterCard (NYSE:MA) have been darlings because the investment dollars allotted to bet on financials shied away from buying money-center banks like Bank of America (NYSE:BAC) and JPMorgan (NYSE:JPM). Instead they piled into fintech.

However the recent rally in yields caused a frenzied wave of buying the traditional banks and money has to come from the same bucket. So there is a rotation out of winners like V stock into laggards. The opportunity here is that rotations are usually temporary. Meaning the dip in Visa stock should be a buying opportunity.

Just like Microsoft, Visa is not cheap. It sells at 35 trailing P/E and 18 times its sales. But this alone is not cause for alarm because that’s how it’s always been. So unless the bears have developed sudden incredible fortitude, I bet that the selling will abate soon.

Technically, Visa stock should have support around $172 per share. Moreover there is bigger support from pivotal zones at $165 per share. So if I owned shares I don’t panic yet. If seeking a long entry with room to spare, I like to sell puts into support zones on bad days to generate income as long as I can gauge the risk.

Visa stock is 7% off its highs, so if I sell a put in V stock at $160 per share I would own it after a 15% correction. This is a risk I can tolerate and I bet would be a fruitful one. I should know that there is short-term risk looming. if Visa falls below $183.75, it could invite sellers to $168 per share. 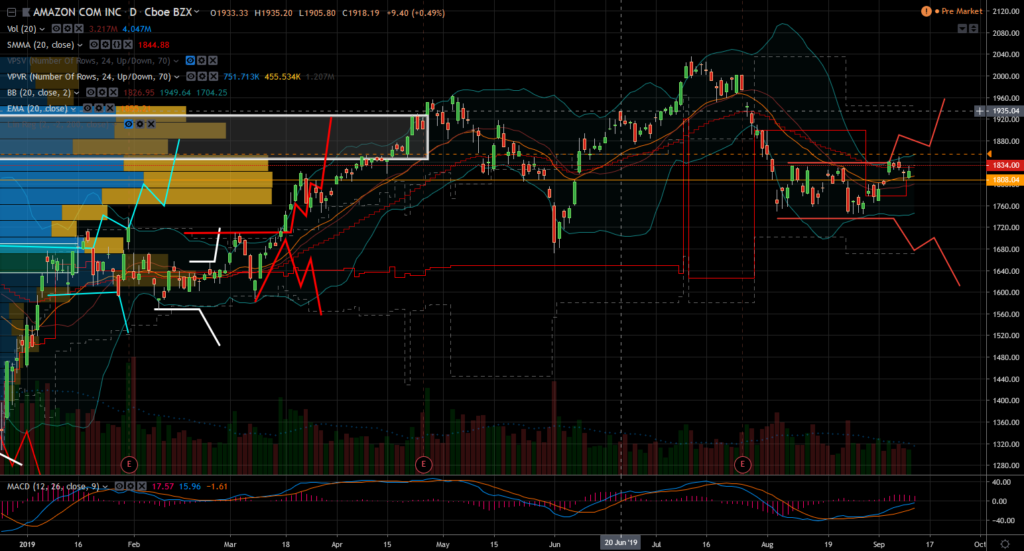 I cannot write about potential upside of fallen angels stocks without including the biggest momentum story of all time. AMZN stock is one that has been in the news for decades. It draws critics and fans in droves and is subject to many a heated debate.

After the May correction, Amazon stock made a nice recovery but it gave almost all of it back. And it now sits 10% lower than the July highs. The size of the moves in Amazon stock should never surprise investors. This is the mother of all momentum stocks and when it moves, it does it fast and long. So it is best to wait for confirmation of breakouts in either direction before trading it.

Short term, Amazon stock rallies if above $1,853 per share, and could even recover what they lost since July. There will be resistance points along the way so it won’t be easy. Conversely, if it falls below recent support near $1,740 then they could extend the correction down to $1,600 per share.

In essence, the battle is between completing an ABC technical move lower or establishing a base for a rebound rally to breakout from the necklines above. Meanwhile, the AMZN stock is ping-ponging inside a tight range and I should chase the break out of either sides. I personally favor the upside potential for as long as the markets in general are healthy.

For those thinking of turning this into an investment, Amazon is a safe bet in the long run in spite of its high valuation. It sells at 75 trailing P/E but only 3.4 x sales. So as long as they are delivering growth, a high P/E is a prerequisite. You have to spend a lot in order to grow a lot.

We still have the same geopolitical risks we had when we first started this correction. So we are one headline away from rekindled panics. This is all to say that traders shouldn’t take giant positions all at once with great conviction because we have are still hostage to headlines. The best homework can be obliterated short-term by silly headlines. So I don’t risk what I cannot afford to lose.