Stocks moved higher on Wednesday and all four of the main indices saw significant gains. The Russell led the way with a gain of 2.12% and that was the best performance by a wide margin. The Nasdaq tacked on 1.06% and the Dow moved up 0.85%. The S&P lagged the other three indices, but still gained 0.72%.

All 10 sectors gained ground on the day and as solid as the gains were for the indices, only one sector moved up more than 1.0% and that was the tech sector (1.04%). The healthcare and materials sectors were close with identical gains of 0.99%.

The energy sector was the biggest laggard on the day with a gain of only 0.05%.

Oil fell almost 2.5% on the day and that definitely held the sector back.

The second worst performance on the day was 0.19% and that was the consumer discretionary sector.

After all the bearish trade ideas in the last few weeks, I have been looking extra hard for a bullish trade idea in order to keep some balance in the ideas. I found Arrowhead Pharmaceuticals (Nasdaq: ARWR) on the bullish list last night and the company has an EPS rating of 77, but an SMR rating of a D. One extra factor came from the Tickeron Trend Prediction Engine which I have mentioned before. There was a bullish signal on September 10 and past predictions have been successful 76% of the time. 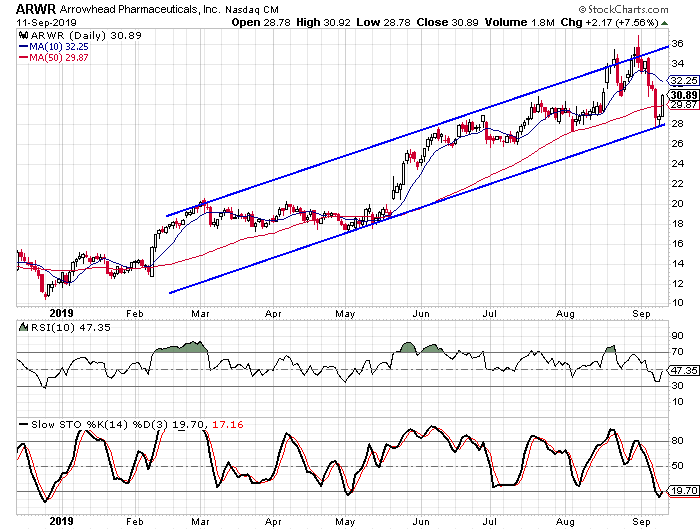 We see on the daily chart that the stock has been moving higher within a trend channel over the last seven months and the stock just bounced off of the lower rail. The daily stochastic readings fell in to oversold territory recently and then made a bullish crossover last night. The stock also dropped below the lower Bollinger Band recently. The last time we saw the stochastic readings in oversold territory and the stock broke below the lower Bollinger band was in early May. The stock jumped 50% in just over a month.

Buy to open the October 30-strike calls on ARWR at $3.60 or better. These options expire on October 18. In order for these options to double the stock will need to reach $37.20. The stock topped out at $36.80 in August, so it will have to break to a new high to hit our target. That being said, if the stock moves up anywhere near as much as it did in May it won’t be an issue. I suggest a target gain of 100% with a stop at $28.00.