Stocks were mixed again on Monday with two of the indices moving higher and two moving lower. The Russell lagged the others on Friday and last week, but it led the way on Monday with a gain of 1.27%. The Dow moved up 0.14% and was the other index in the black on the day.

Sectors were split right down the middle on the day with five moving higher and five moving lower.

The energy sector was the hands down winner on the day with a gain of 2.0%.

The financial sector gained 1.53% and it was the only other sector to gain over 1.0%.

The healthcare sector dropped 0.92% and that was the worst performance of the bunch.

The tech sector fell 0.75% as the second worst performer.

My scans stretched their string of negative readings to six on Monday with eight stocks on the bullish list and 37 names on the bearish list.

The barometer continued to hover around the -25 mark with a reading of -24.3.

Today’s trade idea comes from the bearish list and the subject company is Marathon Petroleum (NYSE: MPC). The company has mixed fundamental readings with an EPS rating of 19 and an SMR rating of a B. 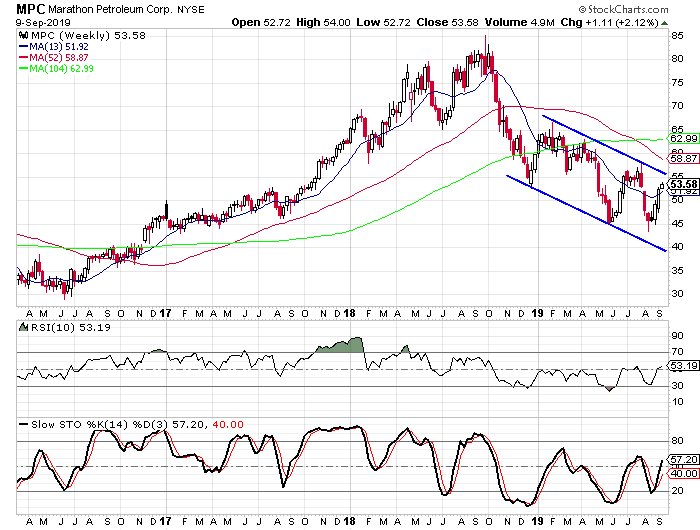 The stock has been in a downward trend for some time now and the weekly chart shows that trend better than the daily chart. A trend channel has formed this year and the stock is approaching the upper rail of the channel at this time. The stock is tremendously overbought on the daily chart and the stochastic readings made a bearish crossover last night.