Thursday saw stocks move sharply higher again as the hopes for a trade deal spiked once again. The U.S. and China announced the next round of meetings will take place in October. That was enough to inspire investors and it led to a risk-on day.

With the risk-on atmosphere eight of the 10 sectors moved higher and it was the defensive sectors that finished in the red.

The utilities sector fell 1.15% and the consumer staples sector dropped 0.63%.

The financial sector notched a gain of 2.01% and those were the only two sectors to gain over 2.0%.

There were another four sectors that gained over 1.o%.

The barometer dropped from -9.7 to -25.3 once these results were added in to the equation.

Even with the large skew to the bearish side, there was one stock on the bullish list that got my attention, but in the end I felt the best setup and risk/reward opportunity was on Targa Resources (NYSE: TRGP) and it appeared on the bearish list. The company has terrible fundamental ratings with a 4 on the EPS rating scale and an E on the SMR rating system. 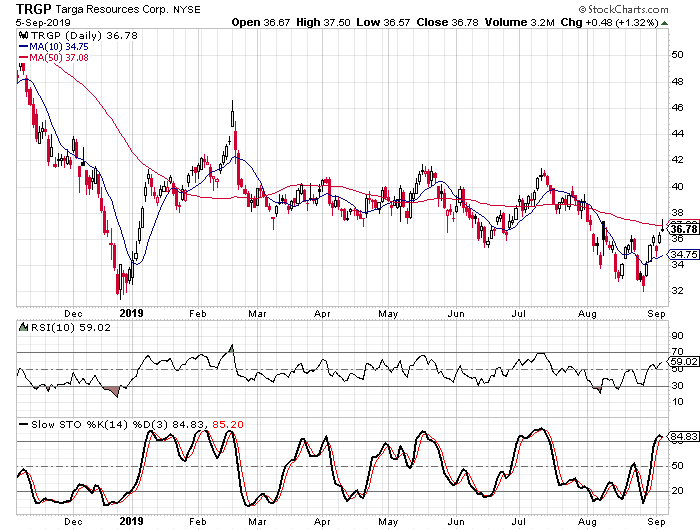 The stock moved above its 50-day moving average yesterday, but it wasn’t able to hold the gain and moved back below it at the end of the day. The pattern for yesterday’s candle is a bearish one as the stock gapped higher, moved higher still, but then dropped back down close to where it opened. This is called an inverted hammer or shooting star in candlestick charting. We see that the daily stochastic readings are in overbought territory and made a bearish crossover yesterday.