Stocks bounced back from Tuesday’s losses with some solid gains on Wednesday. All four indices saw significant gains, but it was the Nasdaq that led the way with a gain of 1.30%. The S&P moved up 1.09% as the second best performer and the Dow tacked on 0.91% as the third best. The Russell lagged the other three a little, but it still managed a gain of 0.85%.

All 10 of the main sectors moved higher on the day and six moved up at least 1% or more. The communication services sector led the way with a gain of 1.94%. The tech sector gained 1.73% and that was the second best performance.

The worst gain on the day was the healthcare sector and it was only 0.02%.

Utilities only managed to move up 0.11% and that was the second worst performance on the day.

Despite the strong gains for the indices and sectors, my scans produced a third straight negative result.

There were 22 names on the bearish list and only three on the bullish side.

The barometer moved in to negative territory thanks to the negative results from the last three trading days.

None of the stocks on the bullish list had decent fundamentals and that left me with the bearish list. There were only a few charts that caught my attention there and the one stock that stood out was Penn National Gaming (Nasdaq: PENN). The company scores a 16 on the EPS rating and a B on the SMR rating scale. Earnings declined by 23% in the most recent quarter. 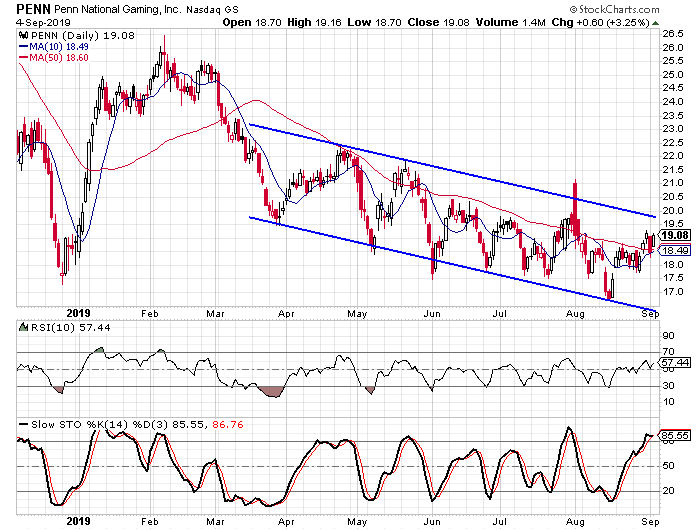