Historically September is the worst month for stocks and on the first day of trading this year, the month lived up to its reputation. With new tariffs going in to effect on September 1 and more posturing between the U.S. and China, investors weren’t feeling very confident.

All four indices moved significantly lower on Tuesday with the Russell falling 1.51% as the hardest hit index. The Nasdaq dropped 1.11% and the Dow fell 1.08%. The S&P did manage to keep its loss to less than one percent, but still declined 0.69%.

Eight of the 10 main sectors fell on the day with the defensive sectors being the two sectors that managed to log gains.

The utilities sector gained 1.77% on the day and the consumer staples sector moved up 0.58%.

There were three sectors that fell more than 1.0% and they were led lower by the industrial sector which fell 1.36%.

My scans turned in a second straight negative result last night with 34 names on the bearish list and only four names on the bullish list.

The barometer dropped pretty hard once these results were added in to the equation, falling from 38.1 to 10.7. 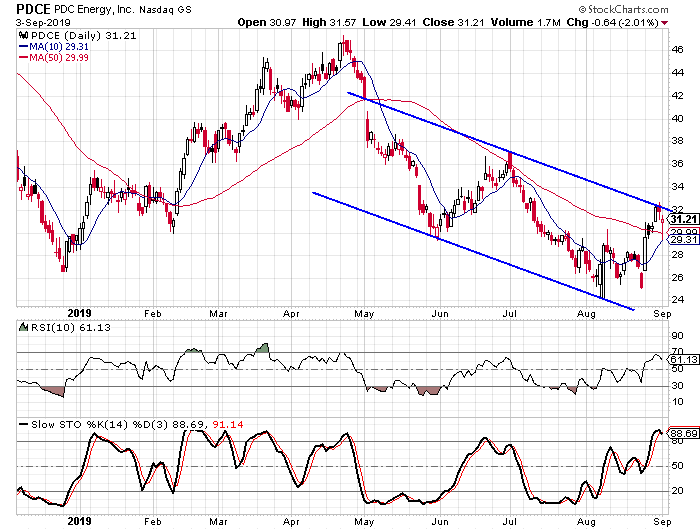 The chart for PDC Energy is an interesting one as the low before the gap lower in May connects with the high from July to form an upper rail to a trend channel. The stock just hit this rail. The parallel lower rail connects the lows from May and August. We also see that the daily stochastic readings are in overbought territory and made a bearish crossover last night.