Stocks opened higher on Friday, but saw some early selling pressure and that took the indices in to negative territory in the morning session. They would rally back, but they waffled back and forth for most of the afternoon. In the end, two would finish higher and two would finish lower.

The materials sector was the top performer with a gain of 0.64% and the industrial sector moved up 0.44% for second place.

The consumer discretionary sector suffered the worst loss at 0.59%.

The communication services sector dropped 0.14% as the second worst performer.

Once these results were added in to the equation, the barometer fell from 54.9 to 38.1.

Despite the small number of stocks to choose from, there was one particular stock that jumped out from the lists. Splunk Inc. (Nasdaq: SPLK) was on the bullish list and it has strong fundamental ratings. The EPS rating is a 99 and the SMR rating is an A. 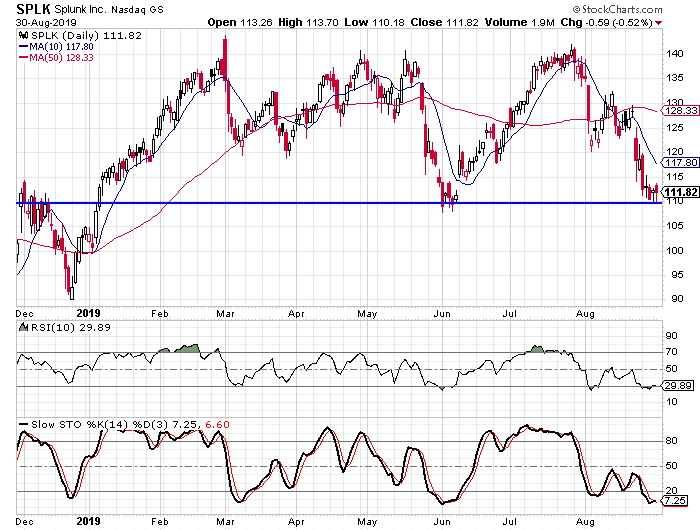 The stock found support in the $110 range back at the end of May and beginning of June. Now the stock has dropped back down to that same level. The 10-day RSI is in oversold territory and the daily stochastic readings are as well. The stochastic readings did make a bullish crossover on Friday and I expect the stock to rally from here.

Buy to open the October 110-strike calls on SPLK at $7.50 or better. These options expire on October 18. In order for these options to double the stock will need to reach $125. There aren’t really any resistance levels between the current price and the $125 area and that is a good thing. I suggest a target gain of 100% with a stop at $109.00.