Stocks jumped from the get go on Thursday as China said he wasn’t planning any immediate retaliatory tariffs. This seemed to lower the fears of investors and the indices shot up on the open and stayed there for the rest of the day.

With the risk-on environment, all 10 main sectors moved higher on the day with seven of them moving up over 1.0%.

The tech sector led the way with a jump of 1.76% and it was followed by the industrial sector with a gain of 1.71%

The defensive sectors were the laggards on the day with consumer staples only gaining 0.03%, the utilities sector tacked on 0.69%, and the healthcare sector notched a gain of 0.76%.

My scans turned in another strongly skewed result to the positive side with 89 names on the bullish list and 12 on the bearish side.

The barometer continued to climb higher and moved to 54.9 from 23.4 on Wednesday.

With so many stocks to choose from on the bullish list, there were far more that caught my eye from that side of the ledger than the bearish list. Today’s trade idea is a bullish one on Square, Inc. (NYSE: SQ). The company scores a 74 on the EPS rating scale and an A on the SMR rating system. 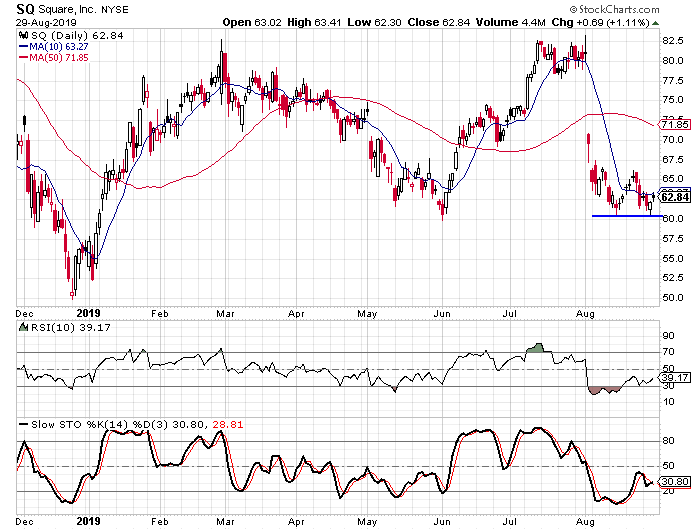 We see a possible double-bottom formation on the daily chart with the stock hitting the $60.50 area twice in the last few weeks. For this formation to be completed the stock will need to move above the high between the two lows. In addition to the double-bottom, the stock seems to be finding support at its 104-week moving average. That timeframe represents two years worth of data.

Buy to open the October 60-strike calls on SQ at $5.35 or better. These options expire on October 18. In order for these options to double the stock will need to reach $70.70. That is just below the 50-day moving average at this point and above the top of the gap from the beginning of the month. I suggest a target gain of 100% with a stop at $60.50.