Wednesday proved to be the exact opposite of Tuesday in that stocks opened lower and then moved in to positive territory. Tuesday saw the indices open higher and then move lower.

All four main indices moved higher yesterday with the Russell leading the way with a gain of 1.14%. The Dow jumped by 1.0% and was the second leading performer. The S&P moved up 0.65% and the Nasdaq tacked on 0.38%.

Nine of the 10 sectors moved higher on Wednesday with the utilities sector falling 0.26% as the lone one in the red.

The tech sector only gained 0.09% and that was the second worst performance and it helped account for the Nasdaq’s lagging performance.

The energy sector led the way with a gain of 1.45% and it was one of three sectors to gain more than one percent.

The consumer discretionary sector moved up 1.25% and that was good enough for second place.

The industrial sector rounded out the three with a gain of 1.15%.

My scans halted the string of four straight negatively skewed results with a pretty sizable positive result. There were 87 names on the bullish list and only two on the bearish side.

The barometer moved back in to positive territory with a reading of 23.4, up from -22.2. This ended the string of three straight negative readings.

There were a number of stocks on the bullish list that got my attention last night. Delta Air Lines (NYSE: DAL) stood out more than the others due to the whole picture—fundamentals, technical picture, and option pricing. The fundamental readings show an EPS rating of 91 and a B on the SMR rating scale. 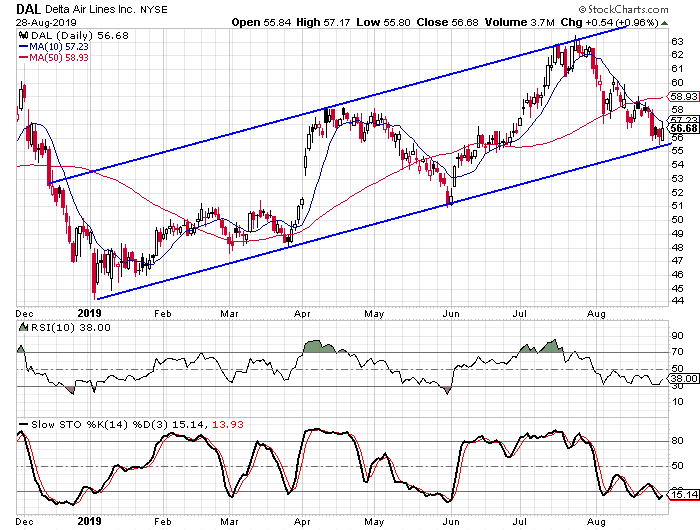 The daily chart shows a well formed trend channel with the lower rail connecting all of the lows from this year. The upper rail connects the highs from April and July. The stock is just above the lower rail at this time. We see also see that the daily stochastic readings made a bullish crossover last night after hovering near oversold territory for the last few weeks.

Buy to open the October 55-strike calls on DAL at $3.75 or better. These options expire on October 18. In order for these options to double the stock will need to reach $62.50. That is near the high from July, but it won’t be anywhere near the upper rail in the next few weeks. I suggest a target gain of 100% with a stop at $55.00.