Stocks started off in positive territory on Tuesday, but all of the indices would move in to negative territory by lunch time. All four ended in the red on the day with the Russell taking the worst loss at 1.35%. The Dow fell 0.47% as the second worst performer. The Nasdaq dropped 0.34% and the S&P declined 0.32% to round out the losses.

Seven of the 10 sectors fell on the day. The financial sector suffered the worst loss at 0.72% as the yield curve inverted again. Second place on the list of losses went to the energy sector with a drop of 0.62%.

The communication services sector led the way with a gain of 0.19% while utilities moved up 0.14%.

The materials sector gained 0.04% as the third one in the black.

My scans only produced seven bullish signals and 11 bearish signals for the day as the market is grinding a little these days.

The barometer continued to climb with the difference of only four stocks between the bullish and bearish list.

I didn’t like any of the setups from the daily scans last night, so I had to move to a different source for today’s trade idea. Baozun (Nasdaq: BZUN) reported earnings last week and the results were pretty good, but for one reason or another the stock sold off. The company has strong fundamental ratings with a 99 on the EPS scale and an A on the SMR rating system. 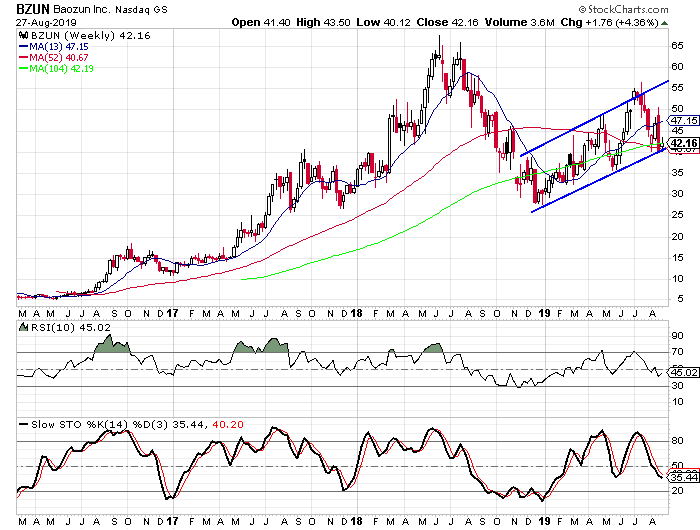 You can see on the weekly chart that Baozun has been trending higher within a trend channel over the last eight months. The selloff from last week brought the stock down to the lower rail of the channel and the support of the various weekly moving averages. What we don’t see on the weekly chart is what happened after the company reporting earnings on May 29 and on March 6.

Buy to open the October 40-strike calls on BZUN at $4.705 or better. These options expire on October 18. In order for these options to double the stock will need to reach $49.50. From where the stock is currently to the target price to double is only 17.4% higher. Given how the stock has rallied after the last two earnings reports, that seems like a small move in comparison. I suggest a target gain of at least 100% with a stop at $40.00.