Stocks opened higher on Thursday and all four of the indices were sitting on gains in the opening minutes. The positive note wouldn’t last long and the indices started falling as the 2/1o treasury yield curve inverted again. By 11:00 all four indices were in the red.

All four would rally back, but only two would finish in the black. The afternoon session was rather quiet as investors await Fed Chairman Powell’s address at the Jackson Hole Economic Symposium later today.

Financials led the way with a gain of 0.56% and the consumer staples sector finished up 0.48% for second place.

The materials sector took the worst loss at 0.69% and the healthcare sector fell 0.48% as the second worst performer.

My scans were negatively skewed for a second straight night with 26 names on the bearish list and only two on the bullish list.

The barometer continued to fall from its huge reading on Monday with the final reading coming in at 9.4 on Thursday.

There were only two stocks that even caught my eye last night. Looking at the fundamentals, the charts, and the option prices, Momo Inc. (Nasdaq: MOMO) is the subject of today’s trade idea. The stock appeared on the bearish list and the fundamentals aren’t too bad with an EPS of 65 and an SMR rating of an A. But it was the chart that got my attention. 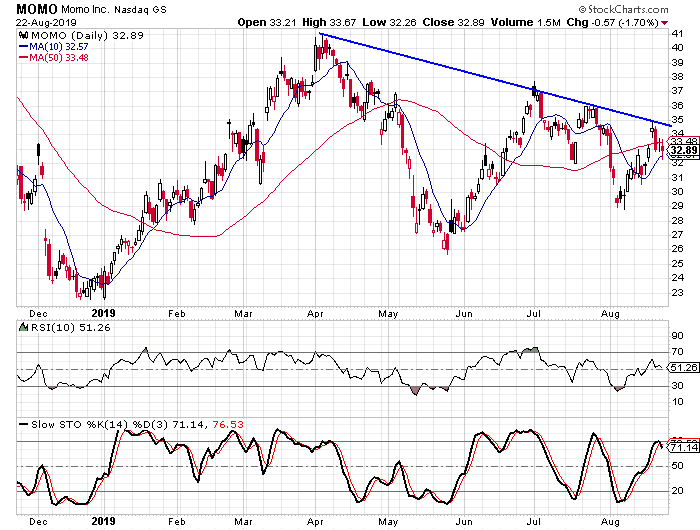 We see on the daily chart that the stock has been trending lower since April and there is a trend line that connects the highs from the last five months. The stock did move above the trend line on an intraday basis back at the end of June, but it closed below it. The daily stochastic readings made a bearish crossover yesterday and they were right at overbought territory.

Buy to open the October 35-strike puts on MOMO at $4.50 or better. These options expire on October 18. In order for these options to double the stock will need to reach $26.00. The stock dropped below $29 earlier this month and that area could serve as support so you will want to keep an eye on the stock in that range. For this one to work we will need the stock to re-test the low from May. I suggest a target gain of 100% with a stop at $34.70.