While there’s a lot at of risk behind Qualcomm (NASDAQ:QCOM) stock, there’s plenty of opportunity. And with the support of the QCOM stock chart, it’s time for contrarian-minded investors to put shares on the radar for buying.

An escalating trade war with China. Global economic concerns. Interest rates. Worries like those have certainly helped wreak havoc on stock portfolios lately. But QCOM stock can more than one-up those troubles as a bevy of headwinds and problems have systematically pressured shares by roughly 23% over the past three months.

Why is QCOM stock under so much pressure compared to a decline of around 5.5% in the Nasdaq?

For one, the wireless technology giant remains embroiled in legal proceedings.

In a twisted sort of fate for QCOM bulls, following this spring’s long-awaited, favorable ruling against Apple (NASDAQ:AAPL), a U.S. District Court ruling went against Qualcomm and ordered the company to change their selling practices.

Now, with the appeals process underway, it’s easy enough to appreciate why investors have bailed on QCOM stock and its seemingly constant, lengthy and costly legal battles.

A recent earnings report has also been problematic after Qualcomm delivered weaker-than-forecast and declining revenues for its third quarter. Possibly more troubling, management fingered lower 4G demand and cut its sales guidance for Q4 as customers await the transition to 5G technology, which isn’t expected to start in earnest until 2020.

Nobody doubts Qualcomm’s place in the 5G food chain. The company is a leader in the space. But many investors are increasingly fearful the higher costs and tighter margins for 5G phones will invariably lead to a roll-out that could be an expensive dud, rather than the second coming, which QCOM stock’s management is forecasting.

So, what’s the good news, if any? Those fears are now offering investors an the opportunity to buy Qualcomm stock at supportive, risk-adjusted levels before the story for Qualcomm changes. 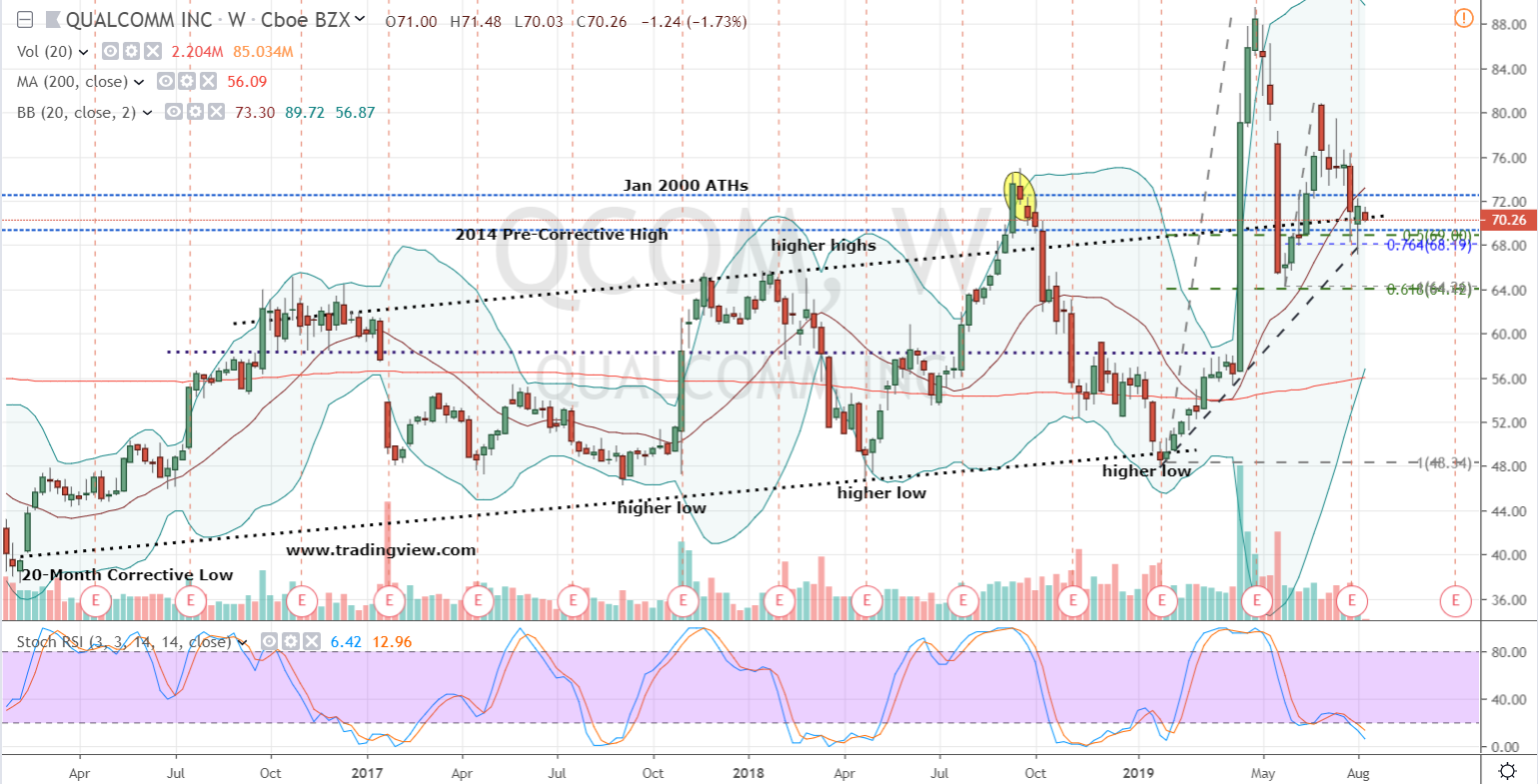 It has been a roller coaster of a year in QCOM stock, but ultimately a constructive and profitable one for bullish investors. Now and courtesy of today’s headline risks, it’s time to consider buying QCOM stock at opportunistic and technically well-supported prices.

Shares of QCOM are currently setting up in a higher low pattern on the weekly chart. The first of the lows followed the post-Apple ruling, which took shares modestly beneath prior channel resistance before finding a bottom secured by the 62% retracement level and a confirmed doji candlestick.

Today’s second weekly pivot low is more durable. A fully-formed hammer pattern has found technical backing from the 50% level, channel resistance now acting as support, as well as a lesser 76% level tied to QCOM’s May low. With shares also oversold on the weekly stochastics, all that’s missing for a promising contrarian-based long entry is confirmation of a bottom.

The QCOM Stock Trade
Given what has been said, Qualcomm stock is a name to put on the radar for purchase above last week’s hammer high of $72.19. I’d suggest trimming position exposure in-between $80 – $82. And to minimize downside risk, respecting the chart and not the headlines will make this opportunity a smarter risk-adjusted one.