Stocks fell again on Monday with all four indices taking sizable losses. The Dow took the worst loss at 1.49% and the S&P dropped 1.23% as the second worst performer. The Russell fell 1.23% and the Nasdaq declined the least at 1.2%. The losses were attributed to ongoing geopolitical issues.

All 10 of the main sectors fell on Monday, but two managed to keep the losses under one percent and those were the defensive sectors. The utilities sector dropped 0.41% and the consumer staples sector fell 0.71%.

The financial sector took the biggest hit with a loss of 1.97%.

The consumer discretionary sector had the second worst decline at 1.54%.

The barometer dropped from 78.2 to 31.7 once these results were added in to the equation.

There were only two stocks on either list that really got my attention last night and they were both on the bearish list.

One had really strong fundamentals and the other one is the subject of today’s trade idea. Adient (NYSE: ADNT) has poor fundamentals with an EPS rating of 16 and an SMR rating of a D. Earnings and sales have been declining. 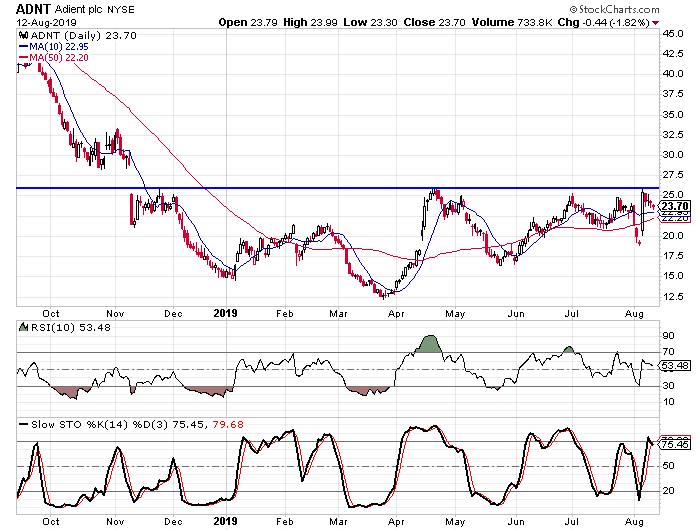 In addition to the poor fundamentals, the chart shows how the stock has hit resistance just below the $26 area. The stock gapped below $26 back in November and has attempted to rally back above it on a couple of occasions since then. The stock jumped to $25.79 last week and has since fallen for three straight days.

Buy to open the October 25-strike puts on ADNT at $3.40 or better. These options expire on October 18. In order for these options to double the stock will need to drop to $18.20. The stock will have to move below the low from earlier this month, but it won’t have to break below the June low. I suggest a target gain of 100% with a stop at $25.50.