Stocks soared higher on Thursday and all four of the indices notched big gains. The Nasdaq jumped 2.24% for the top performance and the Russell tacked on 2.04%. The S&P moved up 1.88% and the D0w lagged the others with a gain of 1.43%.

The smallest gain of the bunch was 1.03% and that belonged to the utilities sector.

My scans turned in another strongly positive result on Thursday with 109 names on the bullish side of the equation and only two on the bearish side.

Once again there were an abundance of stocks to choose from on the bullish list. This time the one stock that jumped out the most was PNC Financial Services (NYSE: PNC). The company’s fundamental ratings are above average with an EPS rating of 71 and an SMR rating of a B. 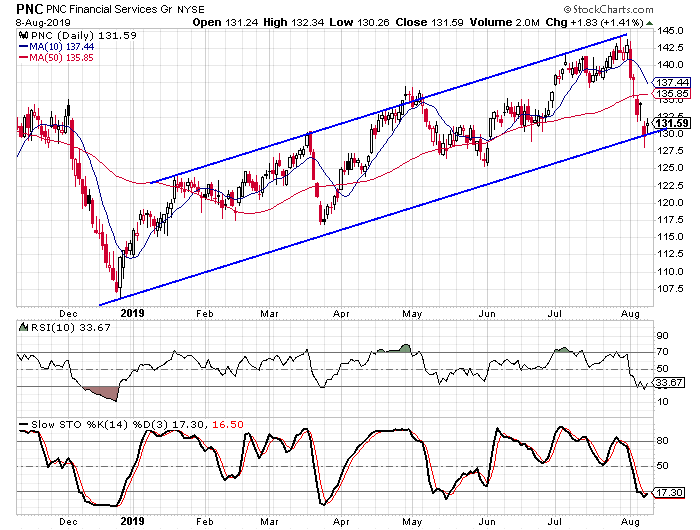 The chart shows a trend channel forming over the last eight months and the stock just hit the lower rail. The channel is defined more by the upper rail than the lower rail, but it still looks like a solid bullish signal. The stock has hit the upper rail numerous times and the parallel lower rail connects the low from December and Wednesday. The RSI and stochastic readings were in oversold territory in December and March before sharp jumps.

Buy to open the September 130-strike calls on PNC at $5.50 or better. These options expire on September 20. In order for these options to double the stock will need to reach $141 and that is below the most recent high and the upper rail of the channel. I suggest a target gain of 100% with a stop at $129.00.