Wednesday provided a wild ride for stocks. When the opening bell rang, stocks dropped sharply and the indices were all down close to 2% within the first hour. They pared the losses in the late morning and continued to climb in the afternoon. Two of the main four actually made it to positive territory at the end of the day. The losses came as several central banks cut rates unexpectedly.

All 10 main sectors opened lower and seven of them managed to move to positive territory by the end of the day.

The materials sector led the way with a gain of 1.38% and the consumer staples sector moved up 1.17%.

Those were the only two sectors that moved up more than 1.0%.

The financial sector dropped 1.22% and that made it the only sector to fall more than 1.0%.

The energy sector was down 0.75% and that was the second worst loss.

My scans turned in an incredibly bullish result last night after the huge turnaround and with so many stocks in oversold territory.

The barometer jumped to a reading of 104.7 once these results were added in to the equation. That is the highest reading since December 26.

With so many names on the bullish list, there were a number of stocks to choose from, but the one that jumped out the most was Microsoft (Nasdaq: MSFT). The company has been an incredibly consistent performer over the last few years and the fundamentals are strong. The EPS rating is a 93 and the SMR rating is an A. 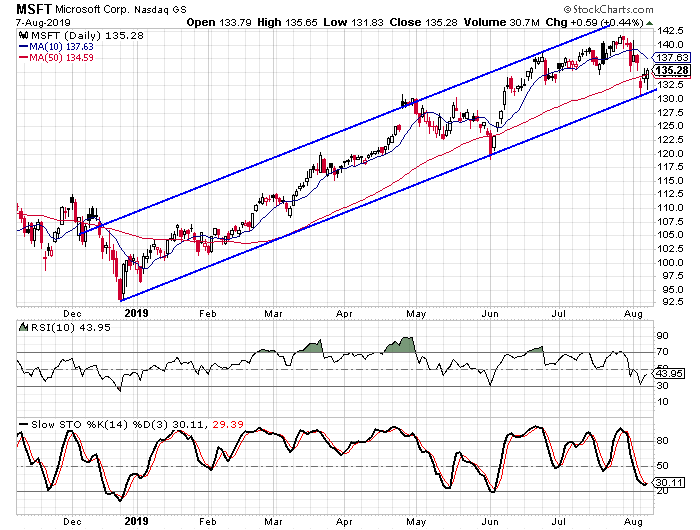 The daily chart shows a very clean trend channel for Microsoft with the lower rail connecting the lows from December and May. The stock just hit the rail again this week and now looks like it is ready to bounce higher. The overbought/oversold indicators didn’t quite reach oversold territory, but they did reach their lowest levels since the beginning of June.